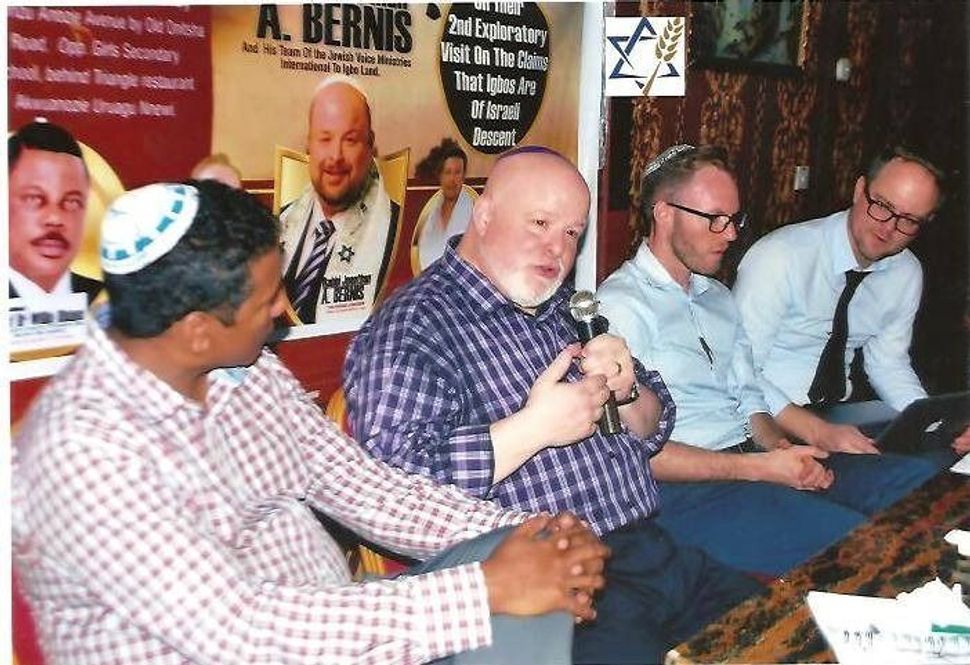 Among the Igbo, one of Nigeria’s largest ethnic groups, there is widespread identification with Jews, and many see themselves as descendants of the biblical Israelites.

But a recent test to determine if a group of Igbo men share genetic material with Jews is back — and no connection was found.

Even before the results were known, the test was the source of heated debate among the Igbo. Now activists are decrying the enterprise, and the missionary American group that carried it out, as illegitimate.

“Our purpose for providing this DNA testing… was to assist them in their pursuit of truth concerning their historical lineage and identity,” Jonathan Bernis, head of Jewish Voice Ministries International, wrote in an email to the Forward. The DNA test results “did not support their claim to be descendants of the ancient people of Israel… [but] we consider them our brothers through our common faith in the Messiah Yeshua.”

Jewish Voice Ministries International is a Messianic missionary organization that appeals to “lost tribes of Israel” and people with Jewish heritage around the world to spread the message of “Messianic Judaism and the Jewish roots” of Christianity.

The Forward first reported on the initiative early this year, when the group carried out the test in collaboration with a local religious group called Redeemed Israel Community of Nigeria. Together, they gathering some 120 saliva samples of community members and the tests were carried out using kits from Family Tree DNA, a Texas-based company that sells genealogical analyses, including a focus on Jewish heritage.

The genetic test had been the source of fierce debate among Igbo members, some of whom questioned Jewish Voice’s ability to successfully carry out such a test and whether such a test would serve or hurt their cause.

“There is no DNA test for ‘Jewishness,’” Igbo lawyer and author Remy Ilona wrote in a lengthy Times of Israel blog post, which outlined his objections both to the group and what he sees as their faulty methods. Ilona has written a series of books promoting the thesis that Igbos are genealogical Israelites.

Onwukwe Alaezi, an author who first supported the effort, decried the Messianic group as saboteurs who came only to delegitimize the Igbo. “Whether the white fake Jews want it or not,” he wrote in a Facebook post. “Igbo are Jews.”