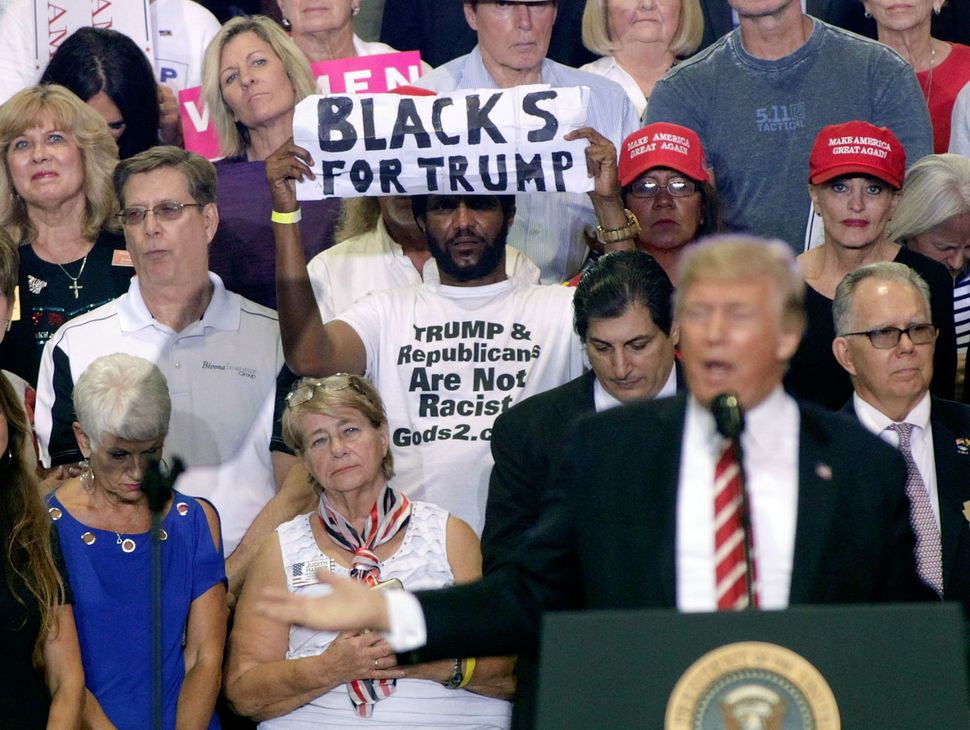 “Michael the Black Man” is back. Spotted earlier during the campaign, hoisting “Blacks for Trump” signs at rallies, Michael Symonette — a Miami activist who believes blacks and whites are the true Hebrews of the Bible and Trump was elevated by the Hebrew god Yahweh to lead — is back to let the world know the president still has his full support.

At Trump’s Tuesday rally in Phoenix, Symonette stood two rows behind the podium, waving his sign and cheering with the crowd. At one point, beaming at Trump, he mouthed the words, “I love you.”

Though he goes by Symontte now, he once was known by the Hebrew name Mikael Israel. In the 1980s, he was an acolyte of Yahweh Ben Yahweh, the late Hebrew Israelite leader who led the Nation of Yahweh, a black religious group that flourished in Miami — but splintered apart following a series of brutal killings.

Along with 14 other members of the group, Symonette was charged with having a role in the murders. He was not found guilty, but the group’s leader was convicted of conspiracy and sentenced to 18 years in prison. Yahweh died in 2007.

Symonette still reveres his guru, though, and his personal website professes Yahweh’s innocence and claims that his former leader would have wanted his followers to vote Republican.

His website, Gods2.com, features an amalgamation of unusual esoteric beliefs about race and imagined ancient history — drawing from his past in the Hebrew Israelite movement, but also veering into new territory.

Above all else, somehow, Symonette believes that Trump’s election was an act of God. On his website, Symonette says Trump was chosen to redeem and deliver the country, likening Trump to the biblical ruler Cyrus. “The reason God Yahweh chose Trump to be president,” he writes, “is to be the white & black man’s deliverer from the Babylon, like the gentile King Cyrus.”