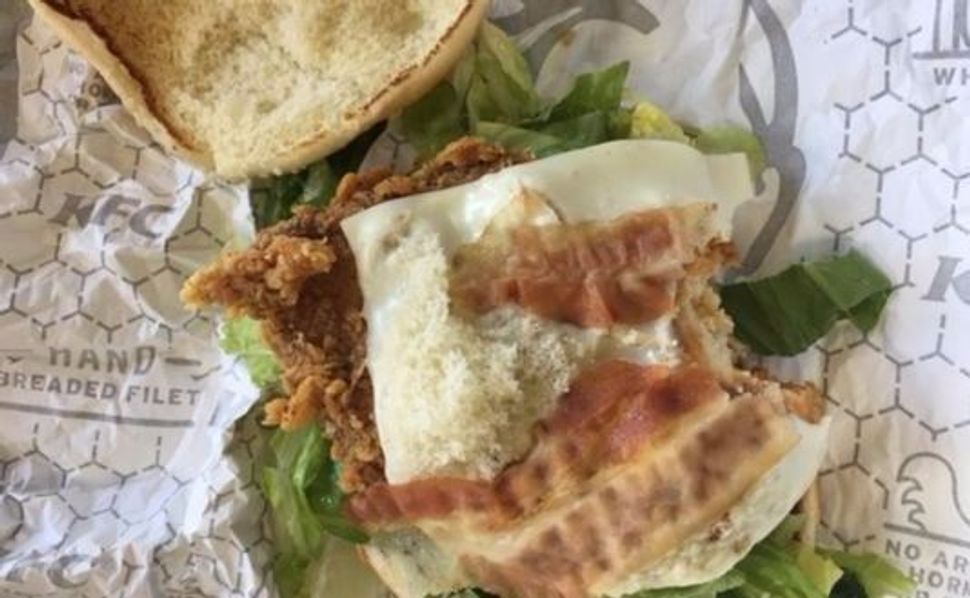 A sandwich with bacon served to Muslim customers at a Michigan KFC. Image by Majed Moughni

A Jewish woman has filed a lawsuit against a Detroit-area Denny’s restaurant for serving her bacon.

Angela Montgomery, 30, of Sterling Heights, Michigan, said she found bacon in the “loaded veggie” omelet served to her last month at her neighborhood Denny’s.

The lawsuit says Montgomery “is a practicing Jew whose religion forbids the eating of any pork product,” according to a report Monday in the Detroit Free Press.

Montgomery says in the lawsuit that the waitress and manager apologized and said it was a mistake since the bacon container was next to the containers for vegetables in the restaurant’s kitchen. She also said they offered her a new omelet at no charge but that her appetite had been ruined by the knowledge that she had eaten bacon.

Montgomery told the Free Press that she was “poisoned” by the restaurant.

“It’s like the most vile, disgusting creature on planet Earth that’s not supposed to go in your body, and I ate it. To me, that’s a poisoning. I was poisoned,” she told the newspaper.—With JTA