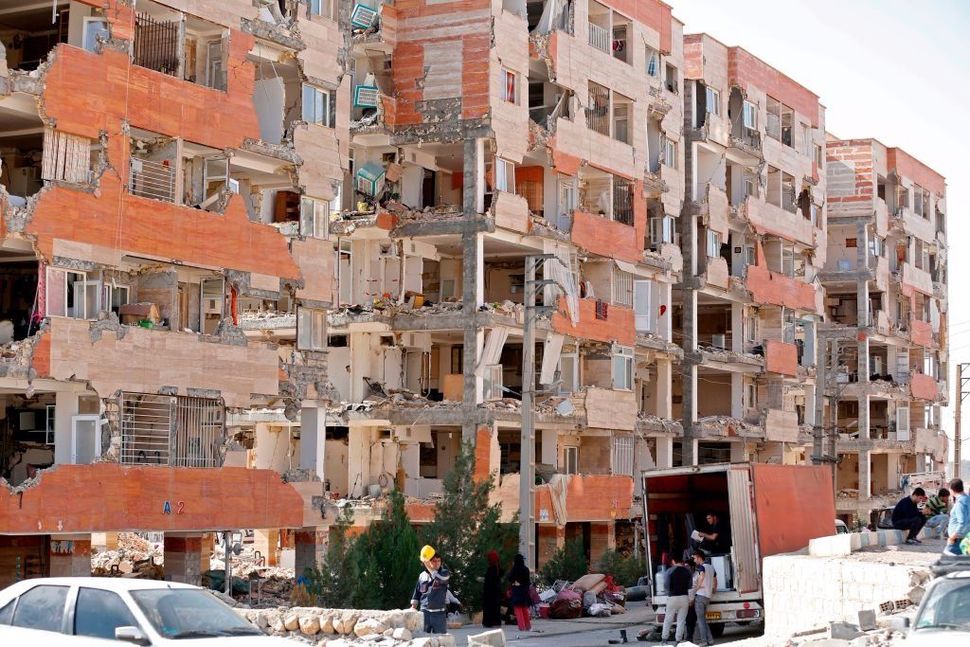 A picture taken on November 15, 2017 shows a view of the buildings left damaged by a 7.3-magnitude earthquake that struck days before in the town of Sarpol-e Zahab in Iran’s western Kermanshah province near the border with Iraq, leaving hundreds killed and thousands homeless. Image by ATTA KENARE/AFP/Getty Images

(JTA) JERUSALEM (www.jta.org) — Israel offered humanitarian assistance to the victims of the earthquake that killed hundreds of people in Iran and Iraq, but was turned down.

Israeli Prime Minister Benjamin Netanyahu told American Jewish leaders gathered in Los Angeles Tuesday that was motivated to direct the aid by photographs of the devastation caused by Sunday’s magnitude 7.3 earthquake, which killed at least 530 people in Iran and several in Iraq.

“I just saw the pictures of the destruction in Iran and Iraq from this week’s earthquake, and I saw these heartbreaking images of men and women and children buried under the rubble,” Netanyahu told the annual General Assembly of the North American Jewish federation movement.

“So I am proud to announce tonight that a few hours ago I directed that we offer the Red Cross medical assistance for the Iraqi and Iranian victims of this disaster.”

“I’ve said many times that we have no quarrel with the people of Iran,” he added. “Our quarrel is only with the tyrannical regime that holds them hostage and threatens our destruction. But our humanity is greater than their hatred. Israel continues to be a light unto the nations and this is what I am proud of. And all of you can be proud of Israel’s morals, and Israel’s might.”

According to an official in Netanyahu’s office, the offer was immediately rejected. “This shows the true face of the Iranian regime,” the official said.

According to The Times of Israel, in 2003, Tehran rebuffed an Israeli aid offer after an earthquake hit the southeastern Iranian city of Bam in 2003, killing more than 26,000 people. In response two two earthquakes tin the Iranian province of East Azerbaijan, which killed more than 300 people and injured some 3,000, Israel did not offer assistance, citing the rejected offer.