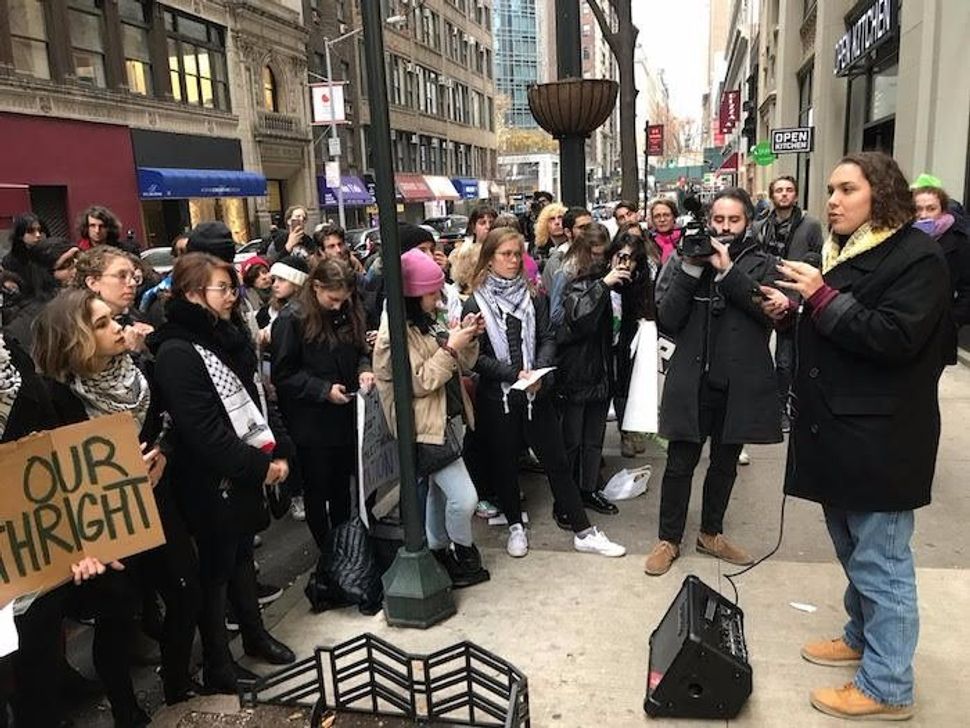 More than 100 people protested outside Birthright Israel’s New York headquarters Sunday as part of a campaign calling on Jewish young adults to boycott the free trips to Israel that Birthright provides.

The event, organized by Jewish Voice for Peace, is part of that organization’s #ReturntheBirthright campaign, which includes a pledge to refrain from the sponsored trips that JVP says more than 1,000 people have already signed.

Both Jewish and Palestinian students took part in the protest, which featured songs in English and Hebrew as well as chants like “Birthright? Birth-wrong!”

One student named Jenny, a JVP member from New York University, said that she had gone on Birthright and regretted it. “After spending long days and sleepless evenings discussing the oppression that our people faced as Jews, I could not hear to bear the same rhetoric used against Palestinians,” she said.

Birthright was criticized by liberal Jewish groups last month after it announced that it would no longer bring groups to meet Arab-Israelis, a move the organization claimed was only temporary.

JVP’s protest had originally been intended to take place outside Birthright’s annual gala, but the shindig was postponed after billionaire donor Sheldon Adelson, Birthright’s top financial backer and a supporter of many right-wing causes, broke his hip.

“We wish Mr. Adelson a speedy and complete recovery. However we remain outraged that Birthright was set to bestow upon him their ‘Guardian of the Jewish Future’ award, at a time when young American Jews- Birthright’s central constituency – grow increasingly alienated by the far-right, ultra-nationalist politics favored and funded by Adelson in America and Israel,” JVP campus coordinator Ben Lorber said in a statement.