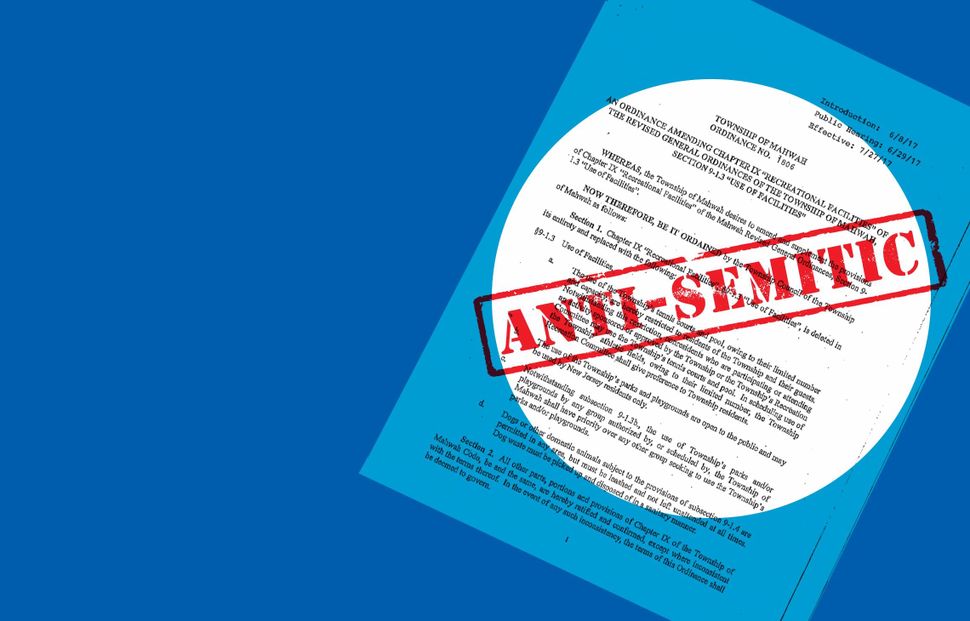 Mahwah, New Jersey, was sued by the state’s Attorney General in October for passing discriminatory ordinances to prevent the “infiltration” of Hasidic Jews into the township. On December 17, the council voted to rescind an ordinance which limited the use of the town’s public parks to New Jersey residents. They also passed a resolution that they would not amend the town’s sign ordinance — as they had planned to in July — to prohibit the creation of an eruv. An eruv is a ritual fence made of string, used by Orthodox Jews to denote where they can carry objects and push strollers on the Sabbath.

The attorney general’s lawsuit argued that both laws were meant to discriminate against Hasidic Jews.

The township of 25,000 also faces another suit from the administrators of an eruv system used by Hasidic Jews in neighboring Rockland County, New York.

The council has denied any wrongdoing in passing the laws. A town attorney urged the rescinding of the parks law as a “strategic move.” Council members were instructed not to comment on the changes.

The Anti-Defamation League praised the council’s actions. The ADL’s New Jersey regional director, Joshua Cohen, said the move shows that “all faiths in New Jersey are protected against intolerance, exclusion and discrimination.”

Legal experts say that rescinding the ordinance may be a prelude to settling the state’s lawsuit. Mahwah’s mayor, Bill Laforet, told the Forward in October that he estimated the cost of fighting both suits could exceed $10 million.

Despite the council’s recent actions, they have still allowed anti-Semitic language at council meetings. At a meeting on December 14th, one resident spoke of Hasidic Jews “sucking the blood” from a New York town, and asked council members to “remove the infection” of Hasidic Jews in Mahwah. (No Hasidic Jews currently live in Mahwah, according to Hasidic community leaders in Rockland County.) The council did not censure the woman.

Correction, December 26, 2017, 9:40 PM — An earlier version of this article misstated the actions taken by the Mahwah council on December 17. The council rescinded a parks law and resolved not to pass a planned amendment to their signage law.