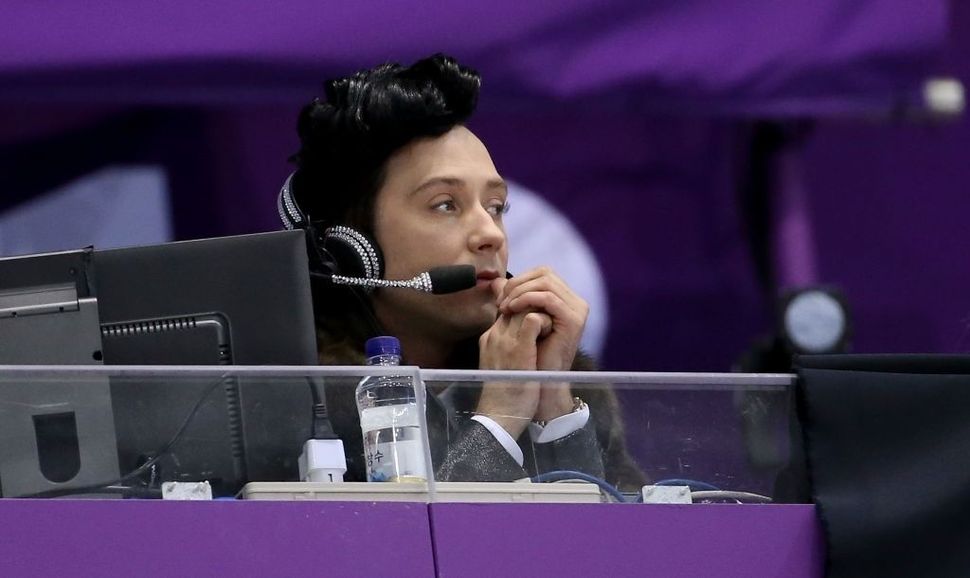 Johnny Weir, the former Olympic figure skater and current NBC color commentator, is known for his flashy outfits and willingness to speak his mind on nearly every subject. Such was the case in 2006, when he told The Washington Post that he considers himself “a little bit” Jewish — even though he was raised Roman Catholic — and that he may have been Jewish in a past life.

Weir has been open about his childhood obsession with the Holocaust — he told the Albany Times-Union in 2011 that one of his favorite books to this day is the Shoah-themed children’s book “When Hitler Stole Pink Rabbit.”

But that obsession went one step further in his Post profile, where journalist Libby Copeland wrote that Weir “says he’s had his past lives read and found out that most recently he was a Jewish girl from Poland during World War II. ‘I mean, it makes sense if you think about it,’ he says. ‘Like, what 4-year-old gets into learning about how 6 million people were exterminated?’”

At the time, Weir wore multiple necklaces, including two Stars of David and an Israeli Defense Forces dog tag, along with an Italian evil eye charm, a pendant of the Virgin Mary and the letter “D” in honor of the Christina Aguilera song “Dirrty.”

Weir’s necklace collection has also included a Kabbalah pendant, and Weir copped to wearing a red Kabbalah string in 2005.

“A friend introduced me to Kabbalah actually before Esther [Madonna] started doing it,” Weir told Salon. “For a while I was getting a big head about how good I was becoming and what was going on with me, and it just sort of helped me stay centered and that sort of thing.”

Weir’s Jewish ties didn’t stop there. Like many figure skaters, Weir has skated to music from “Schindler’s List.”

And in 2011, he married Russian-American Jewish lawyer Viktor Voronov and expressed interest in converting to Judaism. But Weir and Voronov divorced acrimoniously in 2015, and it is unclear if a conversion ever occurred.