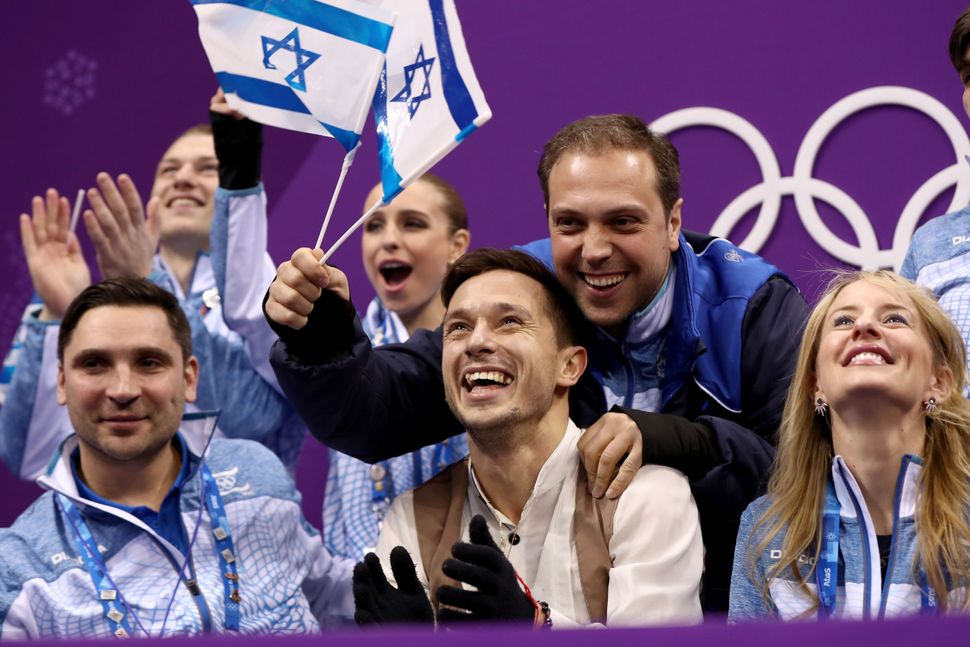 It’s an incredible time to be a Zionist. No, hear me out: Gal Gadot has been unofficially elected High Emperess of the Universe, the Netanyahu family keeps entertaining us with darkly amusing leaked recordings of their private conversations leaked to the world, and Israel has sent their largest Winter team to the Olympics in the history of the country. The ten athletes representing Israel at the 2018 Olympics in Pyeongchang hail from Ukraine, America, the UK, and of course, Israel.

Much like the story of the birth of Israel, the Olympics are about risking everything in a courageous fight to make your soul’s dearest wish a lived reality while lighting a flame that illuminates the power of shared identity, not to be too dramatic. And this year Israel is massively represented by a crack team of athletes who’ve triumphed over a desert climate to become ice masters. So I’m not saying that if you don’t watch the Winter Olympics you’re supporting BDS, but I’m just saying … you should probably watch the winter Olympics.

Let’s get to know these Lions of Zion! Spoiler alert: they’re determined ice-beasts with charisma and beauty to spare, and the training to back it up. And many, many of them make a strong argument for embracing Soviet immigrants to Israel. Israel is strengthened, the athletes can attest, by its diversity. 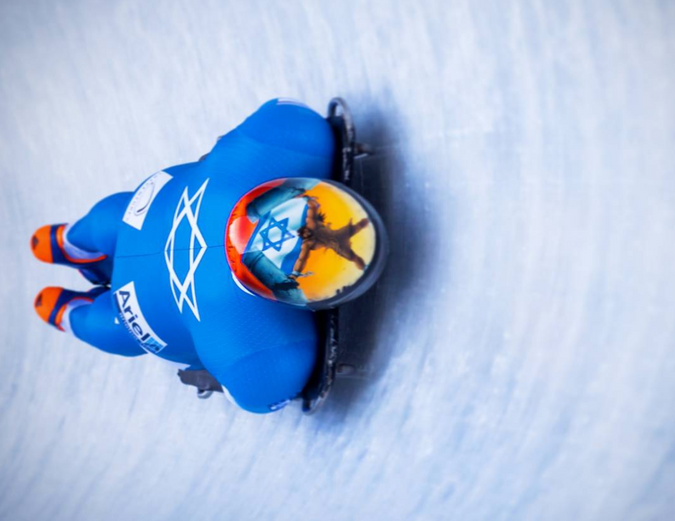 What can we say about the Aliya-making, Jewish day school-attending, MIT graduate Modern Orthodox Olympian nicknamed “The Hebrew Hammer” other then that we know over 300 nice young Jews who we would like to set him up with, and that’s just on the Upper West Side? In an interview with the Forward in January, Edelman told our reporter, “I want to challenge the perception of what Jews and Israelis can do in sports.” The longtime ice hockey competitor is Israel’s first ever Olympic skeleton athlete, having taken up skeleton himself just five years ago, because it looked like “a thrill.” He told the Forward, “There’s so much pride in representing Israel as a Jew, it’s hard to describe the feelings.” Watching AJ Edelman talk about his Zionism is approximately the same feeling as gazing at the picture of the Israeli soldiers liberating the Kotel in ‘67 while pouring a bottle of Soda Stream on your own head. 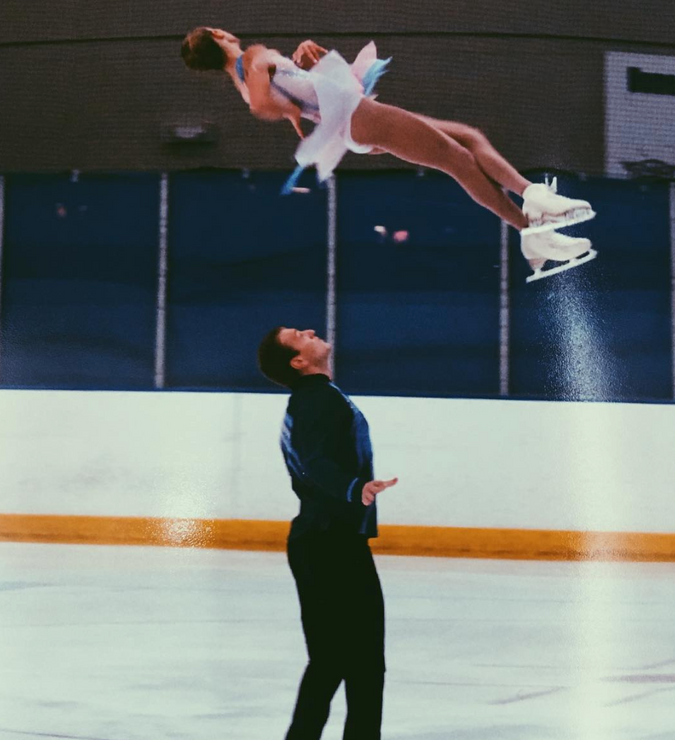 Paige Conners has one of the most spectacularly unlikely stories of any athlete at the Pyeongchang games. The Pittsford, New York native is only 17, but she’s been skating since she was three years old. Conners dreamed of an Olympic bid as a solo women’s figure skater, but became violently ill just before try-outs and was unable to skate. Seeing her daughter’s desolation, Conners’ mother recommended that she try out for the Israeli team, where Karen Conners holds dual-citizenship. But when the 17 year-old skater reached out to the Israeli national team, she was told she could only compete as a pairs skater, a discipline she had never once practiced. “My thought was — this guy holds you up with the air and spins you around and he throws you? And I’m supposed to be okay with this?” Conners’ dad Mark told ABC Rochester. But the defiant Conners paired up with Ukrainian pairs-veteran Evgeni Krasnopolski just six months before the try outs to qualify for the Israeli team, and re-learned her entire sport as a duo. Krasnopolski, who immigrated to Israel with his family as a three year-old from Ukraine, was half of the first ever Israeli pairs skater at an Olympics, in 2014. “We’re so lucky that we really connected,” says Conners. And yes, their free skate is to John Williams’ theme from “Schindler’s List.” 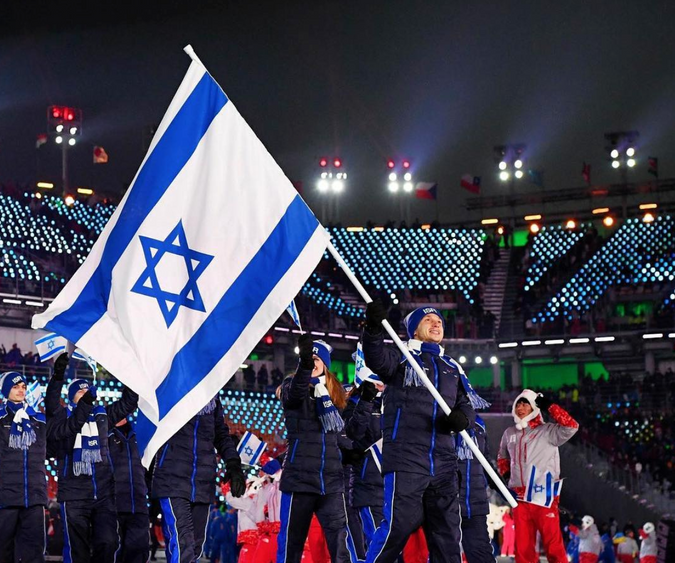 Alexei Bychenko, the Israeli team flag-bearer, has already heated up Pyeongchang with an arresting rendition of Hava Nagila that even my Russian colleagues proudly admit is reminiscent of the Russian dancers from “Fiddler On The Roof.” For a straight injection of Soviet-Jewish pride and pure athletic glory, check out the routine that landed him in second place far ahead of the US champion Nathan Chen on Thursday night. 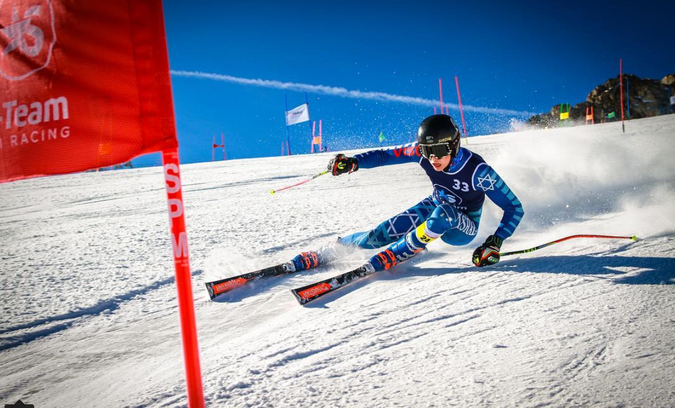 Itamar Biran, reppin’ the blue and white. Image by Instagram

A top skiing star usually owns around 100 pairs of skis. Skiers from countries like Israel, including alpine skier Itamar Biran, own two: one for practice, one for competition. Biran, a 19 year-old born in London but raised in Switzerland, is only the second Israeli man to ever compete in alpine skiing at the Olympics. The trilingual athlete could have skied for England, but chose Israel instead. “Since I was 13, I knew I would race for Israel,” he says. “It’s really just a thing of pride.” 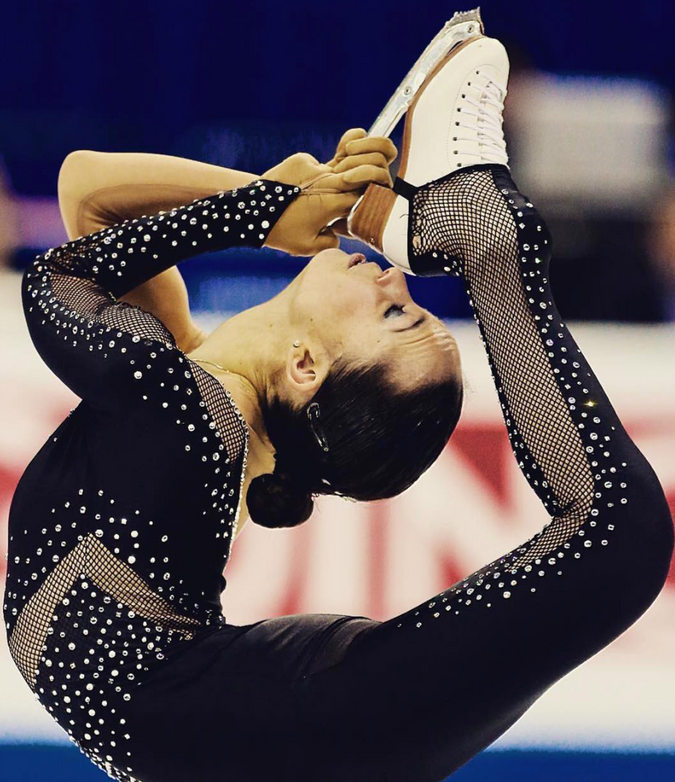 Aimee Buchanan spinning at the 2016 European Championships. Image by Instagram

The Dallas native and longtime figure skater made aliyah four years ago at age 20, and never looked back. Knowing that her star could rise higher on the Israeli team than it would fighting for a spot on the competitive American team, within a year she was the country’s women’s figure skating champion. One of Buchanan’s routines is choreographed to Barbra Streisand’s Avinu Malkeinu, which she believes costs her some points at competitions in countries like Poland. She told the JTA, “to really stand with all the struggles that Israelis and all the country of Israel [have] been through,” makes her journey to Pyeongchang special. “To be able to stand strong and show the world it’s not just a country struggling — they’re people,” she said.

Daniel Samohin is Israeli athletic royalty. Samohin’s parents, who emigrated from Russia (notice the theme here?) in the 1990s, are a rhythmic gymnast and a champion figure skating coach, respectively. Samohin, born in Tel Aviv, grew up mostly in the US and trains in Hackensack, New Jersey along with Bychenko, Connors, and Krasnopolski. The 18 year-old is the first ever Israeli skater to win the World Championship Junior’s title — his routines are choreographed by his mother, and he is coached by his father. 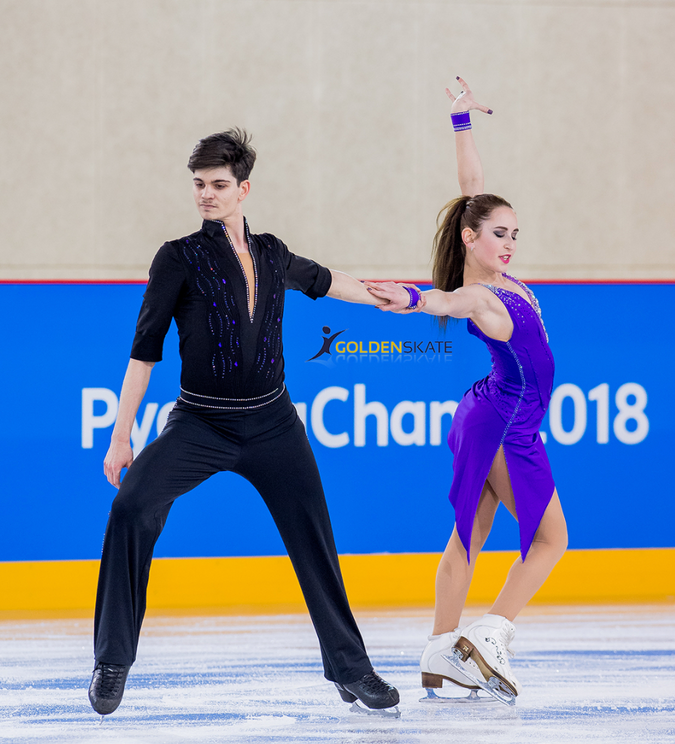 Tankova and Zilberberg, the 20 year-old and 24 year-old ice dancers from Ukraine and Kiryat Shmona, Israel, respectively, will be dancing to another classic Jewish melody at the Pyeongchang Olympics. Nope, not hava nagila or Schindler’s list. The pair will preform their free skate program to “Deliver Us” from the Exodus-inspired animated movie, “The Prince of Egypt.”

With a positively tasty name and a healthy dose of Ukrainian-Israeli confidence, Vladislov Bykanov is ready to win. “I’ve gained a lot of experience at the highest level and I feel ready to go up against the best in the world,” he told the JC. The 28 year-old has served as a pioneer for Israeli speed skating, becoming the first Israeli to qualify for the Olympics in his catergory in 2014 at Sochi. The Ukrainian-born Bykanov moved to Israel at five and lives in Kiryat Shmona, where the quadrilingual skier returns home in between doing little things like achieving a silver medal in the 2018 European championships.