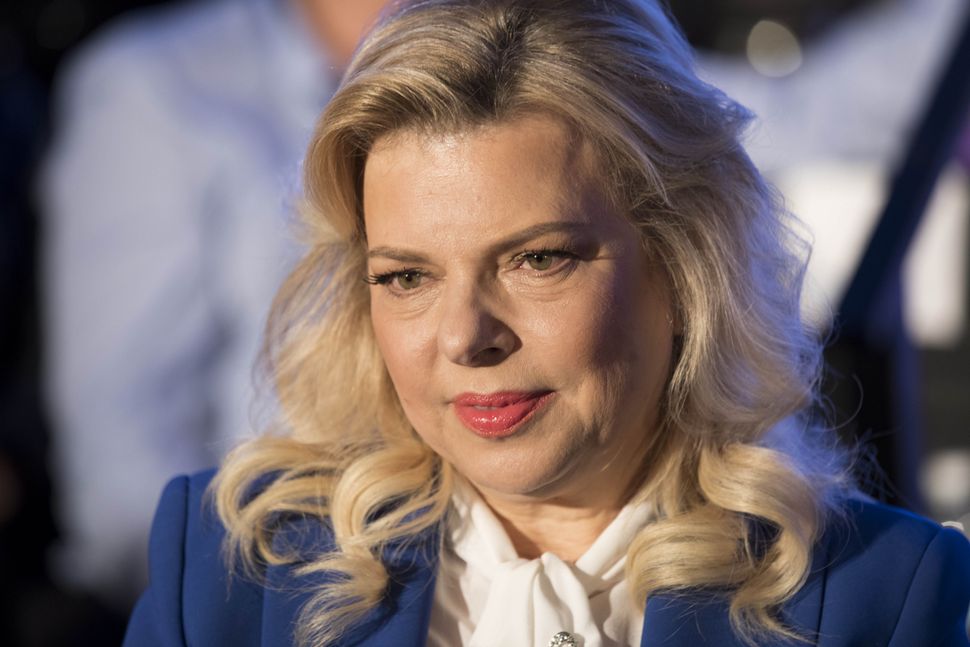 Sara Netanyahu, B.A., M.A., and don’t you forget it. Image by Getty Images

Likudnik, Shas voter, Yesh Atid-er, or just a gal who crumples up the newspaper and throws it at the wall when she reads about Israel’s confusing parliamentary system — whoever you are, you have to admit there is nothing in the world like the leaked recording of a furious member of the Netanyahu family.

For the second time this month, audio recordings of a member of Israeli Prime Minister Benjamin Netanyahu’s family have been leaked to the press and released on the internet. And just like the release of Yair Netanyahu invoking what sounded like his father’s corruption to coax his friend into giving him money to pay a prostitute, this recording is one for the comedy books as well as the history books.

An audio recording from 2009 of Sara Netanyahu berating an aide has been leaked to the Israeli news site “Walla!” In the clip, Netanyahu loses her temper over a gossip column concerning her that the aide, according to Haaretz, had been responsible for overseeing through publication. In the column, Netanyahu, who is currently dealing with her third lawsuit from a former employee charging her as verbally and emotionally abusive, took issue with a line in the gossip column.

In the essay, Netanyahu is apparently described as “obligated to perform public service” as prime minister’s wife. A working child psychologist who apparently felt she wasn’t identified properly as such, Netanyahu is caught on recorder furiously shouting, “PSY-CHO-LO-GIST,” every syllable emphasized in outrage. “B.A.! M.A.! THAT’S IT!” she states, screaming her credentials at the aide. In response to the offending sentence that refers to Netanyahu’s “obligation,” the professional psychologist screams, “THIS PRIME MINISTER’S WIFE DOES PUBLIC SERVICE EVERY DAY! IN HER PROFESSIONAL CAPACITY!” And then, with derision that would impress a teenager, “I. Cant.”

Frankly, it is a must-listen.

The comments, which otherwise have an appealing sort of feminist mystique about them, are left in an unflattering light by the three lawsuits that have been brought against her, all alleging that vicious mistreatment of employees. The past two lawsuits ended with Netanyahu being forced to pay major financial damages to former employees; the third, by an employee who claims she and her co-workers were treated like “slaves,” is pending. Sara Netanyahu is also under police investigation for allegedly using large amounts of state money for personal dining expenses. Ice cream gets expensive.

The Prime Minister, who loves a good Facebook video, took to the net to condemn the press, which loves to “trample a basic right for each person: the right to privacy.” Netanyahu claims that his wife was en route to meet with Holocaust survivors at the time of the leak, which, true or not, is an alibi you can’t help but respect.

Benjamin Netanyahu may decry the leak of his son’s humiliating corruption/prostitution/stripping tape, but Sara Netanyahu comes off in this tape as something of a feminist hero. Could Israel do better than a first family recorded trading alleged corruption for prostitution petty cash and screaming about their degrees? Yes, undoubtedly. But could they do better in terms of free, public entertainment? Not a chance.