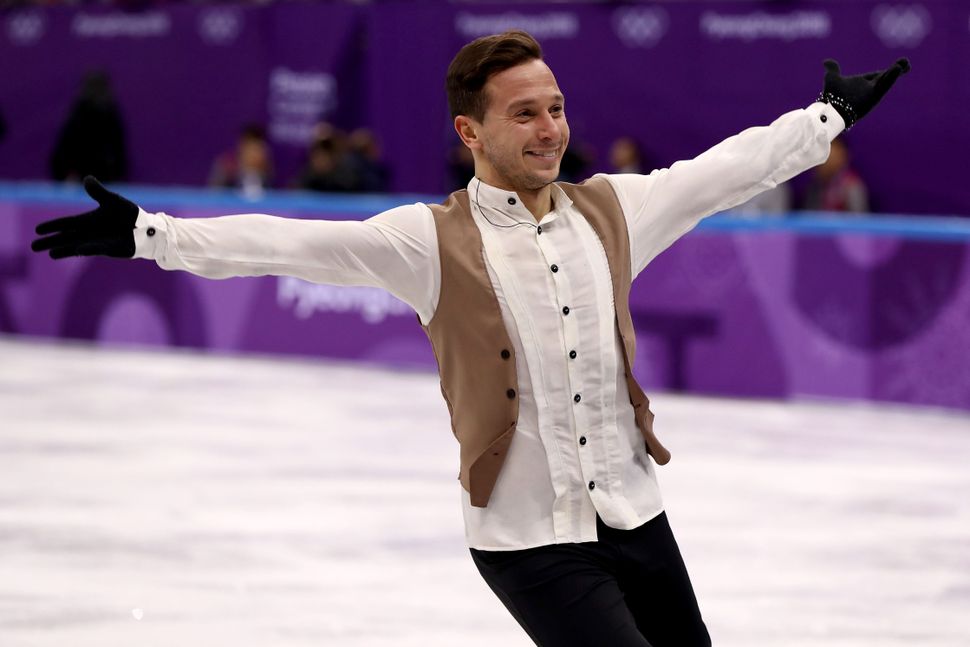 Representing Israel on Thursday night in the men’s short program in the group skate competition, Ukrainian-born figure skater Alexei Bychenko took to the ice with a vigor. In one of the first events of the Pyeongyang 2018 Olympics, Bychenko needed a score of above 86.79 to beat his season’s best.

As the opening strains of “Hava Nagila” rang out, a nod to his Judaism and the country he now skates for, Bychenko exuded the confidence of a bar mitzvah party motivator, the exuberance of a schnapps-drunk uncle, and the technique of a world class figure skater. With a flawless series of triple lutzes, laybacks, and a perfectly executed quad jumps, Bychenko crushed his season’s best, attaining an 88.49. He ended the night in second place, just behind Japan and far ahead of Nathan Chen, the 18 year-old American champion.

At 30 years-old Bychenko, who also goes by Oleksii, has been a professional skater for half of his life. Representing Ukraine until 2009, he chose to switch allegiances to Israel, citing heritage on his mother’s side. Unusually, Bychenko slowly but distinctly improved his scoring as he approached 30; he finished in 21st place at the 2014 Olympics but has since regularly medaled at major competitions. He is the flag-bearer for the Israeli team and is widely considered Israel’s strongest figure skater, known throughout the international world of figure skating for the consistency of his performance.

With the confidence that only a man in a billowing peasant top and shimmering taupe-colored blouse can pull off, Bychenko delivered a crisp, rollicking program to Hava Nagila. Kicking up his heels to an arrangement of the tune that seemed to combine the classic medley with the music in “Lord of the Rings” that accompanies the Ring Wraiths charging towards Mordor, Bychenko nailed each of his moves. He was smiling the entire time.

Deadspin lamented that Bychenko performed to “the most cliched Jewish song of all time,” but we have to disagree. There was such electric joy tinged with danger in Bychenko’s performance that you could practically hear the Cossacks at the door. “He says one of his hobbies is partying,” a commentator said, as the champion went in for a final death-defying spin. Bychenko’s skate is getting the party started in Pyeongchang for Israel and for all the rest of us.