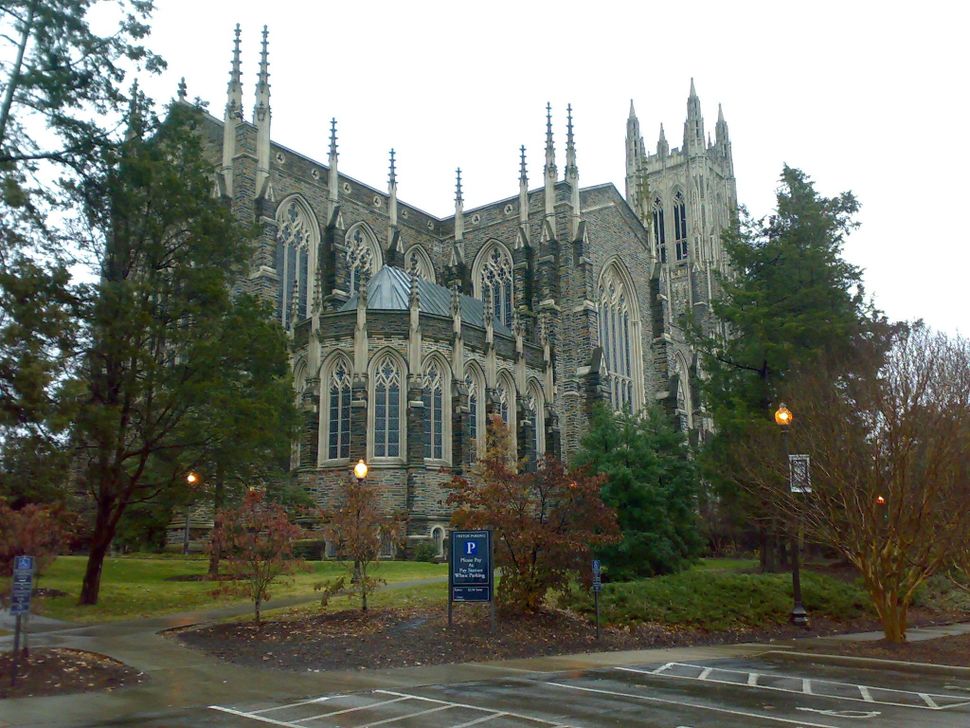 Anti-Semitic posters were found Monday at Duke University and elsewhere in the city of Durham, North Carolina.

One poster depicted a figure pointing a gun at a stereotypical Jewish man with a beard, long nose and yarmulke who had tentacles wrapped around the earth, the Herald-Sun newspaper reported.

“Right of revolution,” the poster says. “Your ancestors threw off foreign oppression, time for you as well.”

Another campus poster said “Greedy Jews” and “End Zionist Oppression,” while a sticker posted at a local bus station said “Master Race Or Disgrace” and “Kill.”

“I was deeply disturbed and, to be honest, frightened,” Duke professor Gavin Yamey told the Herald-Sun. “I’m Jewish and these vile anti-Semitic threats, including the image of a gun pointing to a Jew, really rattled me.”

The posters and stickers were reportedly labeled National Socialist Legion. According to the Anti-Defamation League, that group is a new neo-Nazi group that split from Vanguard America, whose members reportedly included the man charged with killing a counter-protestor in Charlottesville, Virginia last year.

Other NSL fliers have been spotted from California and Colorado to Tennessee and Florida, the ADL told the paper.

“This is an increasingly common tool used by the group to create intimidation,” regional director Doron Ezickson said. “The tactic is meant to draw attention … and create an appearance that they are more prevalent than their numbers would support.”

The incident came less than two weeks after the Durham City Council voted to become the first city in the country to ban the police department from participating in exchanges in Israel.