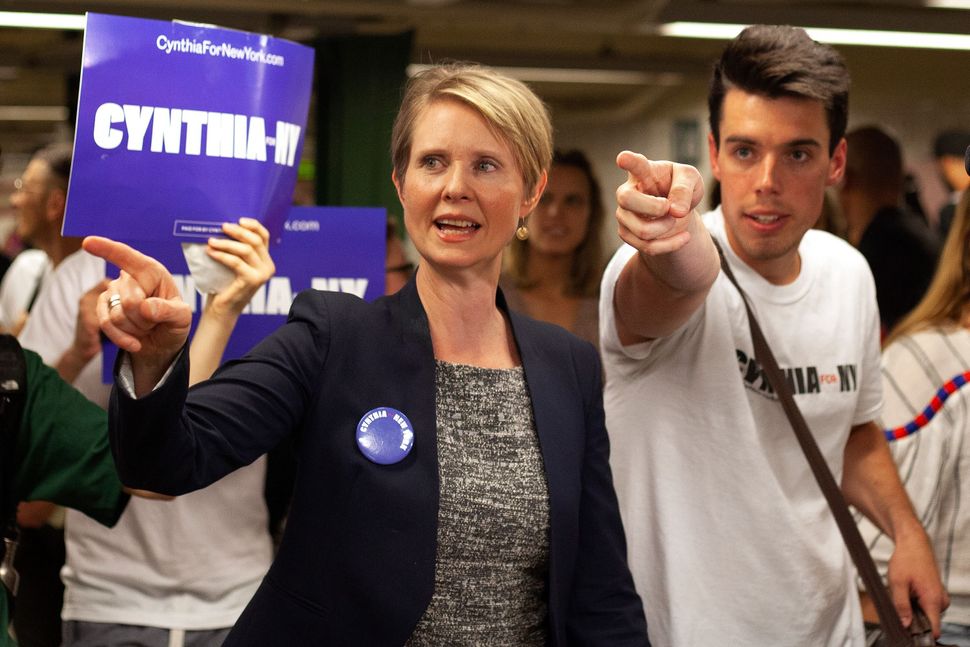 Nixon, who has promoted her experience as an education activist during her campaign, dodged the question while commuters darted around her during a Wednesday press conference at the Union Square subway station in Manhattan.

The former “Sex and the City” actress said she was “not going to weigh in on that today” when asked her position on oversight of yeshivas, but did hint at her displeasure with Democratic state Sen. Simcha Felder for holding up budget negotiations over regulations for the private Jewish schools.

“We’re very close to having the Democratic majority in the state senate that we should have had the last five years, and a lot of people are up for election this fall, not just me, and I am very confident that we will retake the senate fully, and I think when we do, then Simcha Felder will not be in such a crucial position that he’s in right now,” she said.

Felder has rejected Gov. Andrew Cuomo’s advances and continues to caucus with Republicans, giving them a single-vote advantage in the legislature’s upper chamber. The Brooklyn senator also held up the state’s $168 billion budget until other lawmakers agreed not to more strongly regulate the school’s teaching of English, math, history or science.

Leaders in the Orthodox community told the Forward they wanted Nixon to address funding for the schools, which they described as a “crushing” financial burden on some Jewish families.

Nixon has been a strong advocate for improving education standards for nearly 20 years and was part of a group of activists who successfully sued the state for additional funds for city schools.

The candidate did weigh in on progressive candidate Alexandria Ocasio-Cortez’s surprise win over incumbent Rep. Joe Crowley during Tuesday’s primary.

“She ran an incredible grassroots campaign,” Nixon said, “and she showed us that when you give New Yorkers a chance, when you give Democrats a choice in a primary, they’re going to go for the progressive, particularly right now…with Donald Trump in the White House.”

Nixon then touted her similarity with Ocasio-Cortez in supporting issues including single-payer healthcare, 100% renewable energy and refusing corporate donations.