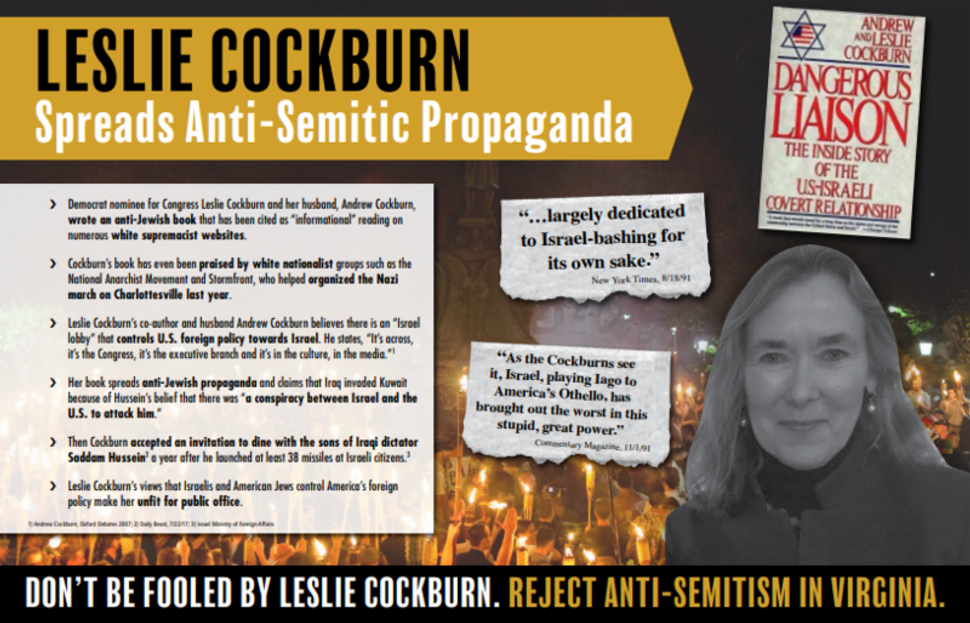 A Republican campaign flyer linking a Democratic candidate for the U.S. House of Representatives with last year’s white supremacist march in Charlottesville, Virginia has been slammed by J Street, which backs the candidate, as one of the most “disgusting political attacks we’ve ever seen.”

The flyer, sent by the Republican Party of Virginia, claims that journalist Leslie Cockburn — who is running in Virginia’s expansive 5th district, which includes Charlottesville — “spread anti-Semitic propaganda” after writing an “anti-Jewish” book they said was praised by neo-Nazi groups including Stormfront. The ad also superimposed a picture of Cockburn over tiki torch-carrying white supremacists who marched through the University of Virginia while chanting “Jews will not replace us” during the deadly 2017 protests.

“Because she co-authored a book decades ago critical of Israel, the mailer accuses her of spreading anti-Semitic propaganda. That’s ludicrous,” the left-wing Jewish group’s national political director, Ilya Braverman, wrote in response. “Criticizing Israeli policies doesn’t make someone anti-Israel. And it ABSOLUTELY doesn’t make someone anti-Semitic. Throwing around such accusations diminishes the very serious and growing threat of anti-Semitism in this country.”

Cockburn co-wrote the 1991 book “Dangerous Liaison: The Inside Story of the U.S.-Israeli Covert Relationship” with her husband. A New York Times review described the text as “largely dedicated to Israel-bashing for its own sake.”

The candidate’s website says if elected, she will respect the relationship between the United States and Israel’s intelligence agencies and “do everything in my power to encourage its most productive and creative use to promote peace in the region and a two-state solution.”

The district, which covers Charlottesville and stretches west of Richmond up toward the D.C. suburbs, has a small Jewish population, ranking 302nd out 438 congressional areas in terms of Jewish residents.

Cockburn is running against Republican Denver Riggleman to replace incumbent GOP Rep. Tom Garrett, who announced he was retiring to deal with an alcohol problem.

Though the district leans Republican and President Trump carried it by 11 points in 2016, Democrats believe they have a shot with Garrett leaving during a potential “blue wave” election year.