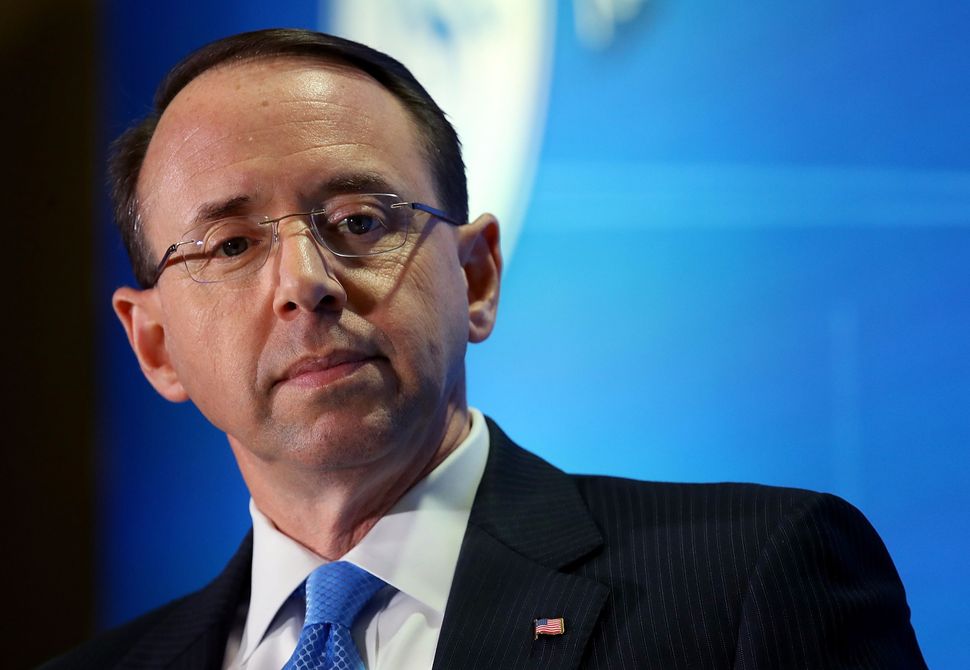 Deputy Attorney General Rod Rosenstein wiil stay in his job at least until he meets with President Trump later in the week, White House spokeswoman Sarah Sanders said as reports swirled that he would either quit or be fired.

Conflicting accounts swirled after Axios said Rosenstein, the man in charge of the Russia probe, verbally resigned to White House Chief of Staff John Kelly, citing an unidentified source with knowledge of the matter. Several hours later Sanders finally tweeted out an official statement, saying the deputy attorney general spoke with Trump following reports he had talked about invoking the 25th Amendment. The president was in New York Monday attending the United Nations General Assembly and it was not immediately clear exactly when or how the two men spoke.

Some legal experts said if Rosenstein quits, Trump would have a freer hand to fill the post with a loyalist under the federal Vacancies Act — and that his room to maneuver would be more limited if Rosenstein is fired.

Rosenstein oversees the probe of Robert Mueller into allegations of collusion with Russia by Trump and his campaign. He was tasked with the handling the explosive investigation after Attorney General Jeff Sessions recused himself because of his work on the 2016 presidential campaign.

The Times reported on Sept. 21 that the deputy attorney general suggested he wear a wire to record the president after the firing of former FBI director James Comey. He also reportedly talked to other cabinet members about invoking the 25th Amendment to remove Trump from office for being either mentally or physically unfit to serve.

Some sources told the Times Rosenstein made the remarks sarcastically and was never serious about trying to force out the president.

Solicitor General Noel Francisco was expected to take over the investigation if Rosenstein was forced out.

Rosenstein’s fate could further complicate both the Russia investigation and Republican hopes to hold onto control of Congress.—With Reuters