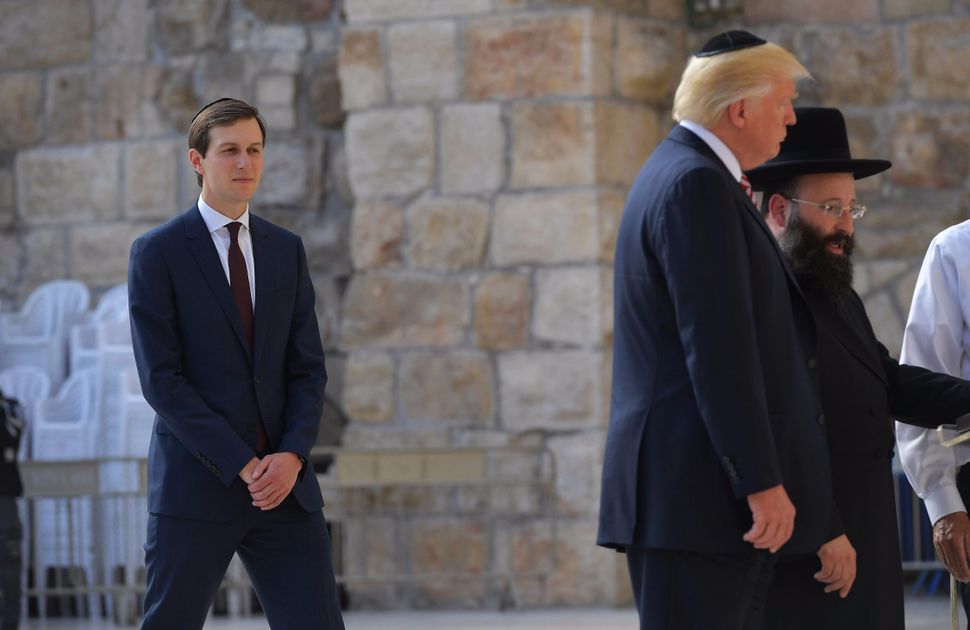 Jared Kushner looks on as Trump talks with Rabbi Shmuel Rabinovitch, who is in charge of maintaining the Western Wall prayer site, during Trump’s visit to Israel in May. Image by Getty

Jared Kushner hasn’t had anything to say to the Hebrew Immigrant Aid Society (HIAS).

In the early days of the Trump administration, the organization shared with the president’s son-in-law documentation of his grandparents’ immigration to the United States, with no response, the New Yorker reported. It still hasn’t heard from him, days after a gunman killed 11 at prayer in a Pittsburgh synagogue, allegedly motivated by his hatred of HIAS and refugees.

Mark Hetfield, president of HIAS, told the New Yorker that he also hasn’t heard from President Trump nor Secretary of State Mike Pompeo, despite HIAS being a State Department contractor.

The file Hetfield was hoping to share with Kushner shows that his grandparents fled from Russia to escape genocide and “resettled” (visa processing, finding a home with access to basic services in a welcoming community) with the help of HIAS, according to the New Yorker. He said he wanted to clue the White House senior adviser in to everything HIAS does: It provides resettlement services but also lobbies for raising the maximum number of refugees admitted to the U.S.

But he said he never heard back, not even after the attack.

“We’ve heard from civil servants, but not institutions,” Hetfield told the New Yorker. “There has been no offer of support. Not even an acknowledgment.”