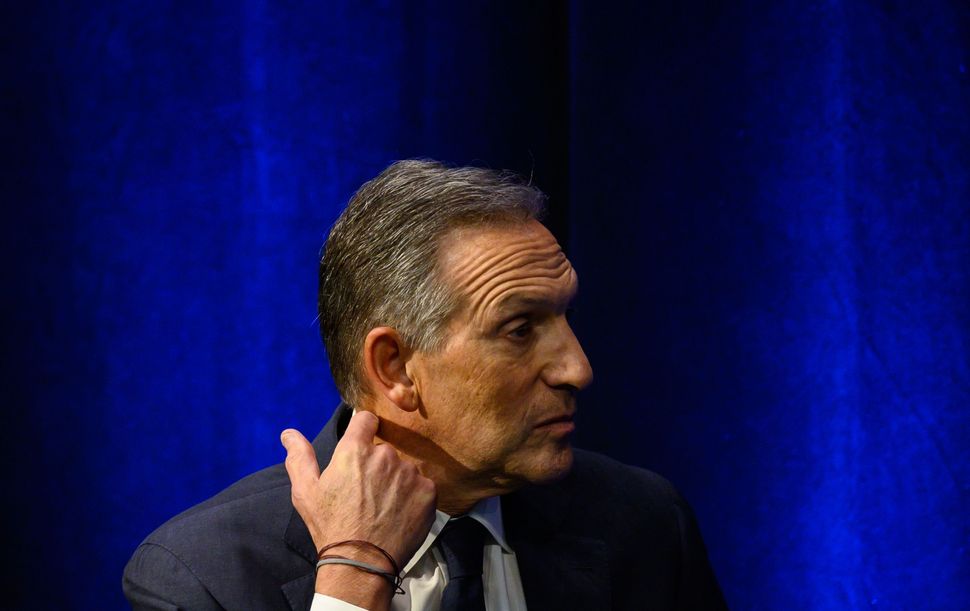 Howard Schultz at a Barnes and Noble event where he was heckled. Image by Getty

The man who heckled Howard Schultz, the ex-Starbucks CEO and possible presidential candidate, is a nice Jewish boy from Brooklyn. He spoke with Gothamist about his history of heckling,, his belief in the power of heckling and his tried and true heckling method.

Andy Ratto, an activist, called out Schultz during the latter’s appearance at a Manhattan Barnes and Noble promoting his new book.

“Go back to Davos with the other billionaire elite who think they know how to run the world,” Ratto added. “This isn’t what Democracy needs right now!”

He was quickly removed from the bookstore by security.

Schultz has not officially announced his candidacy, but said he might run in a 60 Minutes interview broadcast Sunday.

Ratto told the Forward in messages sent via Twitter that he sees his Jewish identity as playing a role in his heckling.

“I think it’s part of a long-standing tradition of brash Jewish humor and sarcasm that I see as part of our community’s heritage,” he said.

Ratto added that he views Schultz through the lens of “radical Jewish leftism”: Whereas some Jews might treat Schultz as one of their own because he is broadly liberal and Jewish, Ratto considers Schultz a “class enemy.”

Ratto told Gothamist he thinks that Schultz is only running to protect his own money, and found fault with Schultz’s early rejection of “Medicare for All.”

“When someone accumulates billions of dollars on the backs of the labor of their employees and then turns around to say they want to become president to protect their own interests at the expense of others, we should be clear about what’s happening,” Ratto told Gothamist.

Ratto said he believes heckling is an efficient way to get politicians to hear the opinions of regular citizens. He cited New York State Governor Andrew Cuomo’s assertion that it was a single man who grabbed his lapel and asked him to look into the proposed temporary shutdown of the L train that led Cuomo to push for reversing the long-planned shutdown.

Ratto has also heckled Cuomo himself, as well as former White House press secretary Sean Spicer — at the very same Barnes and Noble where he heckled Schultz.

Ratto said only one part of his heckling was planned — the bit about Schultz being an “egotistical billionaire a*****e.”