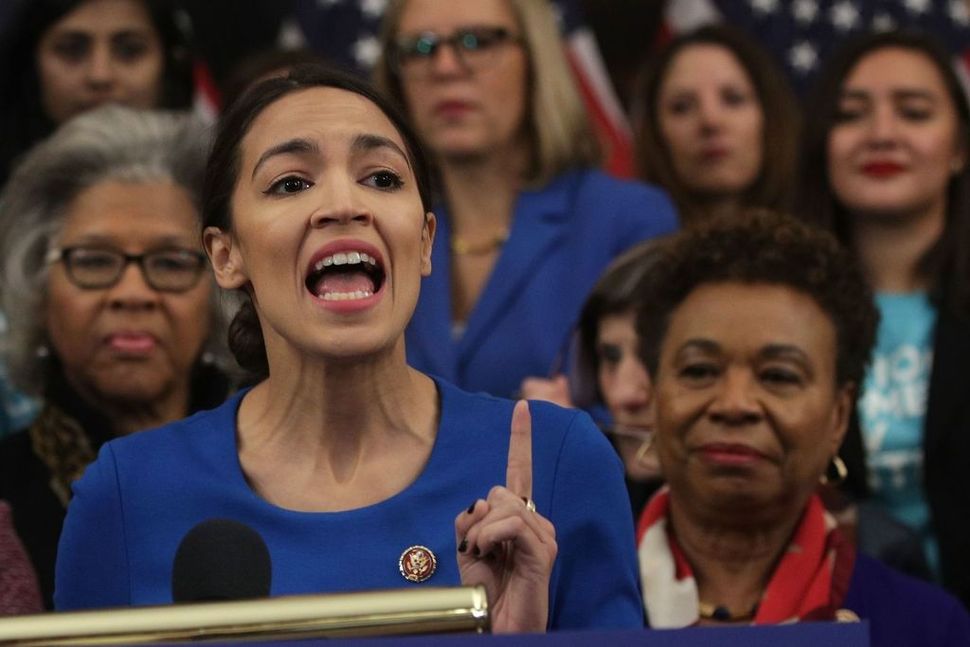 Rep. Alexandria Ocasio-Cortez speaks as other House Democrats listen during a news conference at the U.S. Capitol, January 30, 2019. Image by Alex Wong/Getty Images

Rep. Alexandria Ocasio-Cortez said Sunday that she would be reaching out to the Jewish community after being criticized for praising British Labour Party leader Jeremy Corbyn, with whom she had a phone call to discuss issues of shared concern.

Corbyn, a longtime staunch critic of Israel who has called members of Hamas and Hezbollah his “friends,” has been accused for years by British Jewish institutions of allowing anti-Semitism to fester in his party. A September 2018 poll found that 85% of British Jews think that Corbyn himself is anti-Semitic.

Corbyn, like Ocasio-Cortez a fellow socialist, tweeted on Sunday that it was “Great to speak to @AOC on the phone this evening and hear first hand how she’s challenging the status quo.”

“It was an honor to share such a lovely and wide-reaching conversation with you, @jeremycorbyn!” the freshman New York Democrat replied. “Also honored to share a great hope in the peace, prosperity, + justice that everyday people can create when we uplift one another across class, race, + identity both at home & abroad.”

Ocasio-Cortez was slammed on social media for taking the call, with some accusing her of anti-Semitism. One follower, Jewish activist and Forward columnist Elad Nehorai, urged her to educate herself on Corbyn’s history:

I’m a huge huge fan of yours. I hope you’ll take a look at the amount of Jews trying to call attention to Corbyn’s long, documented history of anti-Semitism.

The left’s blind spot in this regard can still be fixed. But we need leaders like yourself to listen.

Ocasio-Cortez directly responded to Nehorai. “Thank you for bringing this to me,” she wrote. “We cannot + will not move forward without deep fellowship and leadership with the Jewish community. I’ll have my team reach out.” Ocasio-Cortez’s chief of staff later pledged to set up a call or meeting between Nehorai and the congresswoman.

The episode was praised by Jewish community leaders.

Of course. Looking forward to the discourse and community-building ahead!

.@AOC — @ADL welcomes a dialogue with you because Jews in UK & across Europe are afraid. As an important voice for all people, we need you to challenge Corbyn on his persistent #antisemitism & remind him that intolerance has no place in #UK, America or anywhere.

Ocasio-Cortez, who said in December that she had Sephardic Jewish ancestry, had previously raised hackles by calling Israel’s actions last summer, when dozens of Palestinians were shot on the Gaza border, a “massacre.” She said in a later interview with PBS that she was “not the expert on geo-politics on this issue” and was dedicated to learning more.