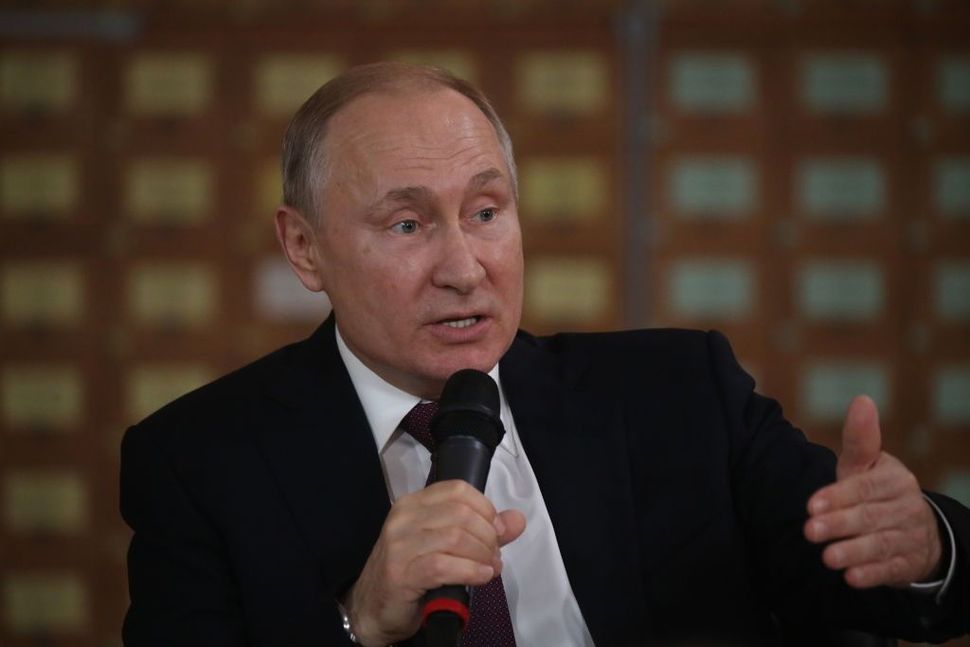 (JTA) — Russian President Vladimir Putin made a joke invoking the anti-Semitic trope about Jews and money during a visit to Crimea.

During a visit with local residents and religious leaders on Monday in Crimea, a local Jewish leader made a comment about financial difficulties.

Putin replied “So the Jews have problems with finances! Only such a thing could happen in Crimea.” He also said to the bearded ad black-hatted Jewish man in Hebrew “todah rabah,” or thank you very much.

The exchange was first reported in English in a tweet by Washington Post Moscow correspondent Anie Ferris-Rotman, who included a video of the exchange.

Putin today, responding to a Jewish community member in Crimea: “So the Jews have problems with finances! Only such a thing could happen in Crimea” (forced laughter all round) He also tells him, in Hebrew, “thank you very much” https://t.co/fWNvW6wxFt

Putin also said that the Jewish community in Russia was making a large contribution to his country’s development.

“I hope that Jews in Crimea will play the same positive role,” he said. “Judaism is also among our traditional denominations, traditional religions, and I am very pleased that religious life is developing here in Crimea.”

Some 10,000 Jews live in Crimea, and the community has been deeply supportive of Russian annexation of the peninsula.