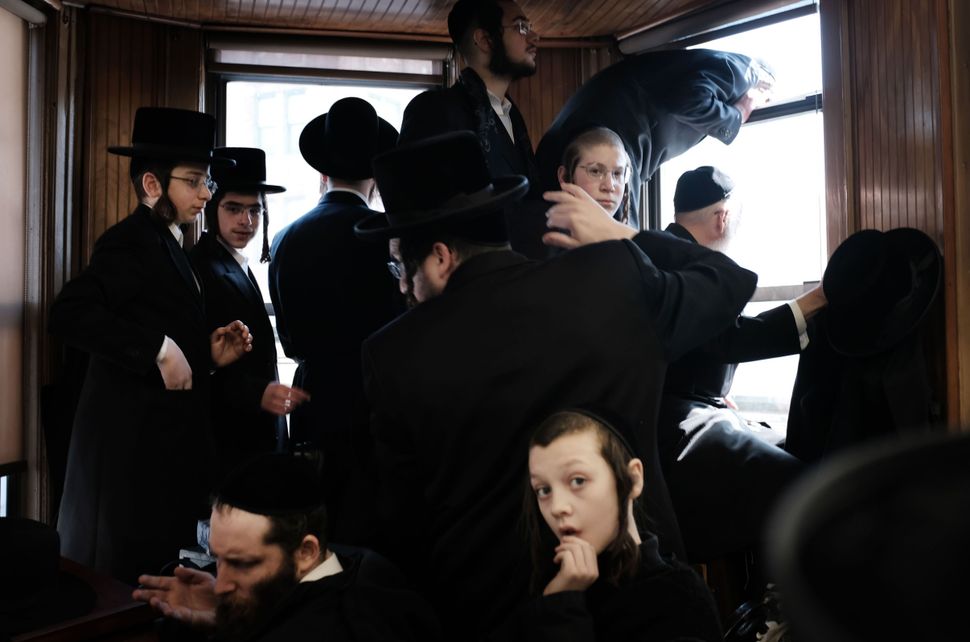 Students at a yeshiva watching the funeral of the Skulener rebbe last week in Borough Park, one of the two Hasidic neighborhoods hit hard by the ongoing measles outbreak. Image by Getty

New York City Mayor Bill de Blasio declared a state of emergency in select parts of Brooklyn where a measles outbreak has festered in the borough’s ultra-Orthodox community.

The declaration will require unvaccinated people in the area to receive the measles-mumps-rubella (MMR) vaccine that protects against measles infections. De Blasio said that people who refuse to get vaccinated could face fines.

“This is the epicenter of a measles outbreak that is very, very troubling and must be dealt with immediately,” de Blasio said at a news conference in Williamsburg. De Blasio had previous urged the ultra-Orthodox community to vaccinate in March.

New York City has seen 285 reported cases of measles since the beginning of the outbreak in October, nearly all among Hasidic Jews, and mostly among children. There have been 465 cases of measles reported nationally this year, and the number of infections is growing at a historic rate. The high infection numbers are being driven primarily by outbreaks in the ultra-Orthodox community in Brooklyn and Rockland County, just outside New York City, as well as in the Portland metro area.

Last month, Rockland County, which is home to tens of thousands of Hasidic Jews, declared a state of emergency, barring unvaccinated minors from being in public spaces for 30 days. But a lawsuit filed by parents at a Waldorf school in the area led a judge to strike the ban down with 20 days left to go.

Anti-vaccine parents have compared their being targeted by health officials to the persecution faced by Jews during the Holocaust. One woman wore a yellow star to a protest of the Rockland County ban. Hasidic Jews in Rockland County have expressed their fears that the state of emergency would further alienate them and sow mistrust among non-Jews in the region.

In Rockland County and in Brooklyn, the outbreak is hitting Hasidic communities that are receptive to misinformation about vaccines, with some even going so far as to defy their rabbis, who urge them to vaccinate.