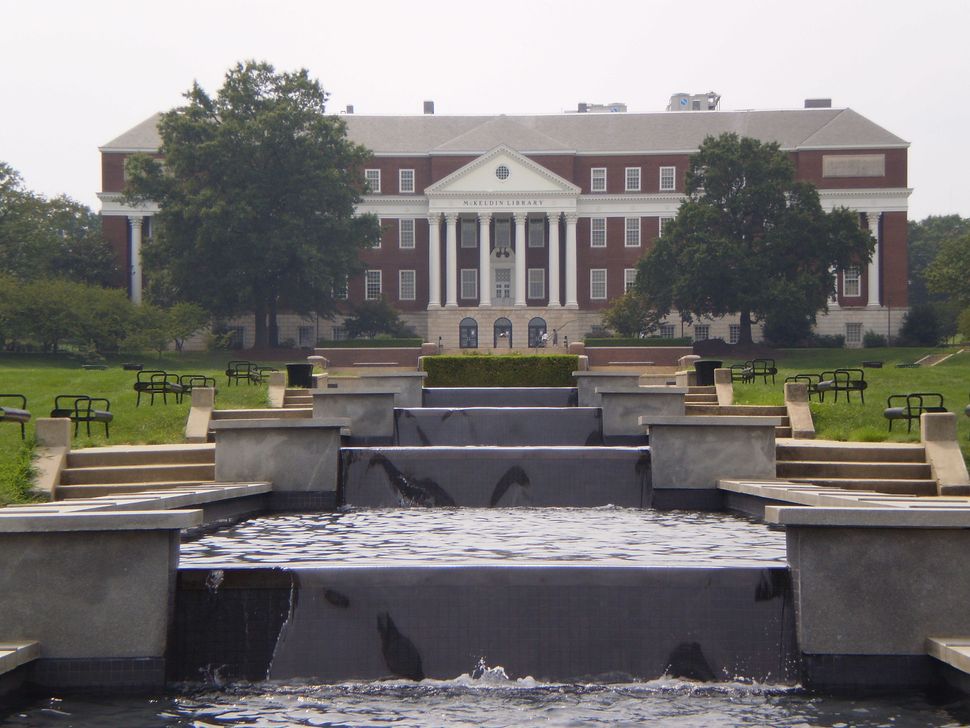 McKeldin Fountain at the University of Maryland. Image by Wikimedia

(JTA) — The student government of the University of Maryland rejected an Israel divestment resolution.

The resolution was defeated on Wednesday night after a five-hour meeting by a vote of 25 against, 9 in favor and 2 abstentions.

More than 100 students addressed the Student Government Association prior to the vote, the University of Maryland student newspaper, The Diamondback, reported. Seventy-four students spoke in opposition to the bill, and 55 spoke in favor of it.

The meeting took place during Passover, when many Jewish students were home for the holiday. More than 400 students attended the meeting in the Stamp Student Union’s Colony Ballroom. Campus police officers were stationed at every entrance to the venue, the newspaper reported.

The student government told Fox News that it was not possible to move the vote since Wednesday is the last day of the association’s legislative session when bills are heard.

Some 650 students signed a petition by #DivestUMD, an initiative of Students for Justice in Palestine. The resolution was endorsed by campus groups including the Pride Alliance, Political Latinx United for Movement and Action in Society and the Muslim Alliance for Social Change, the Diamondback reported. A petition against the resolution was signed by 1,086 students. The resolution called on the university to divest from companies doing business in Israel that “are contributing to and/or exacerbating egregious human rights violations in occupied Palestine.”

In 2017, the university’s student government scrapped a BDS bill before it came to a vote.

“We are very proud of the students at UMD who once again stood up against this campaign of hatred and propaganda,” Rena Nasar, managing director of Campus Affairs at StandWithUs, said in a statement. “BDS has no place on campus and has only served to divide students and damage efforts to bring Israelis and Palestinians together.”