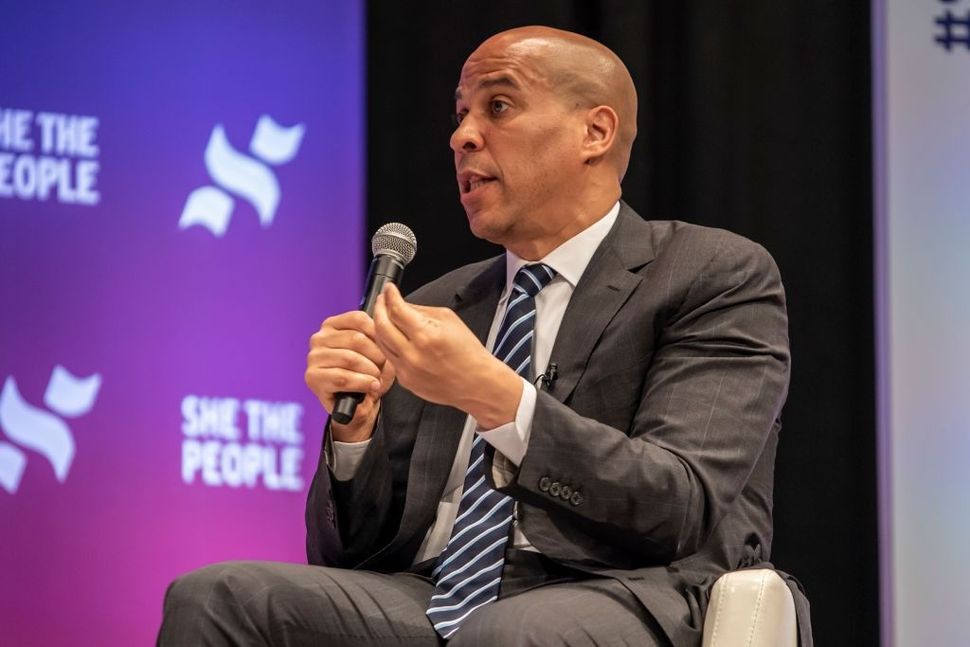 Democratic presidential candidate Sen. Cory Booker (D-NJ) speaks to a crowd at the She The People Presidential Forum at Texas Southern University on April 24, 2019 in Houston, Texas. Image by Sergio Flores/Getty Images

Speaking at a forum for Democratic presidential candidates, Sen. Cory Booker defended Rep. Ilhan Omar from attacks on her from President Trump and others, calling them “toxic” and “reprehensible.”

During a question-and-answer forum, an audience member said that Omar had been “critical of the outside influence of AIPAC in determining U.S. foreign policy, including funding of Israel. Subsequently, she has received condemnation from the President and members of her own party, as well as death threats. What will you do as president to protect the right of courageous women of color to criticize U.S. policy even when directed at allies?”

“The criticisms of the congresswoman Omar, what Donald Trump have been saying about her, is reprehensible,” Booker said. “It is trafficking in Islamophobia, and it should be condemned by everybody. This kind of selective condemnation should be a chorus of people condemning her.”

Several Jewish organizations defended Omar earlier this month after Trump tweeted a video juxtaposing her comments about the September 11, 2001 terror attacks with images from that day, saying that they took her words out of context and “incite fear and hate in the hearts of people in this country.”

Omar apologized earlier this year for using what many considered anti-Semitic tropes in her criticisms of AIPAC, the pro-Israel lobbying organization. But she has defended other criticisms of Israel and its American supporters as legitimate discourse.

Speaking to constituents at the AIPAC Policy Conference last month, Booker alluded to Omar’s AIPAC remarks and called them “absolutely unacceptable,” according to an audio recording acquired by the Intercept.