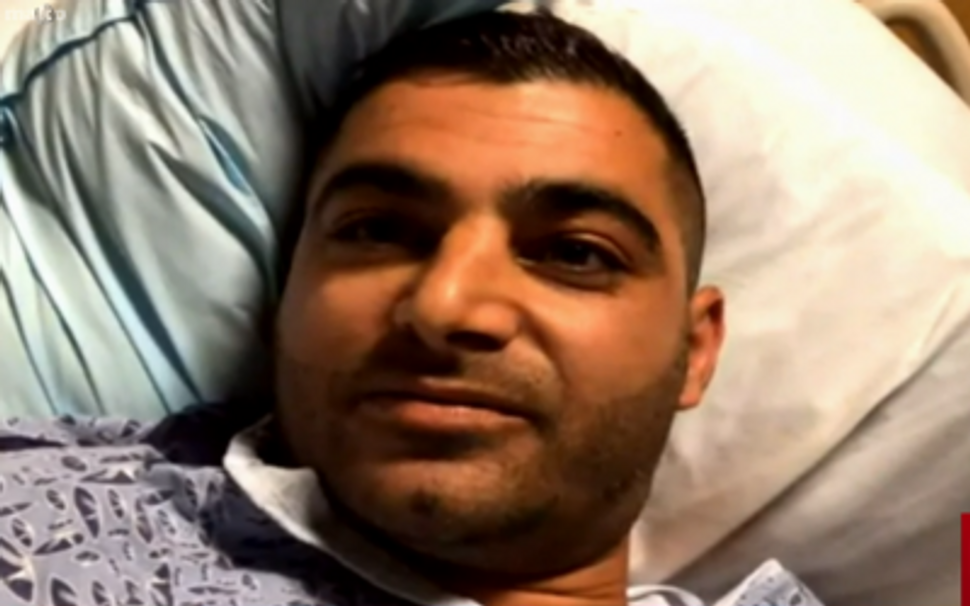 Almog Peretz, in his hospital bed. Image by Screenshot: Channel 12

This man is being called a hero. A friend says 34-year-old Almog Peretz saved children during today’s synagogue shooting in Poway. Hear the story tonight on @fox5sandiego pic.twitter.com/FKBIc9tcCL

Almog Peretz, 34, had the training necessary to react quickly to a life-threatening emergency. He is Israeli, and is from Sderot — a town located half a mile from the border with Gaza, and subjected over the years to rocket attacks. Residents have only 15 seconds after a a rocket alarm sounds to get to a bomb shelter.

“This is sad, but I am originally from Sderot so we know a bit about running from the Kassam rockets,” Almog told Israel’s Channel 12, according to multiple outlets.

Peretz reportedly saved the lives of several children when a gunman burst into a Chabad synagogue in Poway, California, Saturday morning and shot the rabbi. Peretz grabbed several young kids who were sitting near him and hustled them out a side door.

“A person with a big rifle, like an M16, entered the synagogue and started shooting everywhere,” Peretz told Channel 12. “At first we thought the ceiling had collapsed, but then I turned around and saw he was aiming his weapon at me.

“There were many small kids next to me. I took a little girl who was our neighbor and three nieces of mine and ran. I opened the back door and we ran with all the children to a building in the back. I hid them in that building.

“As I picked up the girl, the terrorist aimed his weapon at me. I was injured in the leg.”

“He grabbed all the kids in his hands and was just running towards the exit (when) he saw another kid over there,” Danny Almog, another person at the synagogue, told local news services. “He grabbed him and started running and (that’s when) the shooter shot him in the leg. He didn’t care. He kept on running with the kids and just ran out.”

Almog said that one of the children Peretz instinctively grabbed was Almog’s daughter, Yuli.

Peretz was eventually taken to the same hospital where the synagogue’s rabbi, Mendel Goldstein, and a young girl from the synagogue were being treated for injuries from the shooting. Medical officials have said that all three will survive.

There were other acts of instinctive heroism in the Poway synagogue in the seconds after the shooting began.

Shimon Abitbol, the Israeli father-in-law of Danny Almog, jumped on his grandson — Almog’s son — when he heard the shots go off.

“Without thinking twice I lay down on my grandson and protected him,” Abitbol told Times of Israel. “After I counted seven or eight gunshots and there was a lull — I assume the weapon jammed — I took the grandson and rushed outside through a side door; we gathered all the children there.”

Abitbol, a paramedic with the Magen David Adom service, also tried to perform CPR on Lori Gilbert-Kaye, who ultimately died of her gunshot wounds at the hospital.

Peretz had only moved to California from Sderot a few months before the attack, according to Haaretz.

“It doesn’t matter where we go, we have to look out for ourselves,” Peretz told an Israeli radio station. “In Sderot, where I used to live, didn’t they also fire rockets at us? I didn’t believe this would happen in a place like this.”