What Really Happened In Gaza 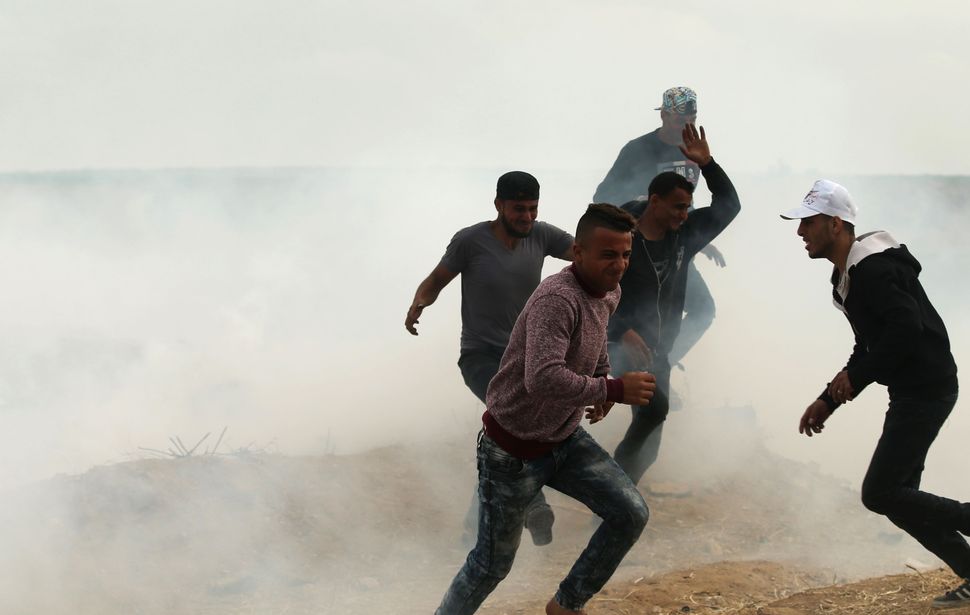 This weekend, hundreds of Gazans were injured by the Israeli Defense Forces during a Palestinian demonstration near the border with Israel. To some, like Israel’s Defense Minister Avigdor Liberman, Israeli soldiers deserve a medal for the amount of restraint they showed in not mowing down more civilians. To others, the whole event was a “propaganda victory” for Hamas.

But the truth is a lot more complicated.

The protest was by far dominated by nonviolent protest. Indeed, the media coverage of the protest has completely ignored the fact that Hamas did not organize the protest. And yet, once Hamas decided to get involved, they successfully hijacked the protest from its independent organizers.

Hamas, like all other factions, used the demonstration for a good photo-op session and sought to advance their vested interests through the protest.

Was Hamas wrong to hijack the protest? Absolutely. But how did Hamas’ participation in the protest undermine the authenticity of its non-violence or the genuineness of people’s determination to challenge their condemnation to a slow death in Gaza’s prison?

Here’s what actually happened in Gaza: By the early morning, a long human chain was forming at tents assembled 700 meters away from the separation fence. Whole families joined together to chant, telling the world, “We are here!”

In the early morning, families were sitting in groups eating breakfast, watching the borders and sharing stories of Palestinian displacement from 1948. The excitement was palpable. Everyone was peering at the green lands behind the fence and even contemplating the Israeli soldiers close by on the other side. Every person there had a heartbreaking story and a profound reason to stand in the face of immediate danger, unarmed.

My younger brother, who last week was denied — for the fifth time — a travel permit out of Gaza for an urgent eye operation that if not performed will permanently cost him his sight, joined the protest to assuage his burning anger.

A close 33-year-old friend, one with a Master’s degree in Arabic studies who hates Hamas, yet has never found a job because of the blockade, and was never allowed to leave Gaza for the same reason, joined in the first wave of young protesters who approached the fence.

Throwing rocks was extremely discouraged, yet teaching and enforcing complete non-violence among despairing and furious young teenagers is nearly impossible.

Some from the extremely poor village of Khuza’a eventually raced towards the fence with handful of rocks. This was a symbolic act, since the Israeli snipers were completely protected behind huge sand barriers. A rain of teargas and live bullets burst against them in response, and then live fire.

Was it wrong to throw rocks? Absolutely. But did it necessitate the immediate shooting at kids who posed no direct threat to the soldiers?

My asthmatic brother was at least 700 meters away when he fainted from the tear gas; the kid next to him was shot. While Israel claims that it only shot those who approached the fence, my brother believes that whether he stood a meter closer to the fence or further away, his chances were the same, as even people running away from the fence were given no second chance by the soldiers.

Mainstream media outlets remained silent while the death toll rose to 16 and hundreds were seriously injured. Two Gazans eventually fired at the Israeli soldiers, and this “retaliation” incident became an excuse for the Western media to claim parity in the attacks, even while 30,000 civilians were deemed terrorists by Israeli politicians. If any thoughts and prayers were sent, they were sent to the young IDF soldiers who missed Passover celebrations.

Hamas insisted on a nonviolent protest in the media, in street talks, at schools, universities, mosques and shops throughout Gaza. Hamas did not -– and cannot — force anyone to run towards their death at the fence. They cannot drag people out of bed and shuttle them to the buffer zone. Not even their own personnel can be forced to partake in such an event if they don’t believe in its aims. Frustrated masses are highly unlikely to be manipulated into facing death for the sake of dancing to someone else’s tune.

If it weren’t for the 11-years of suffering under an unbearable and ever-tightening blockade, no one would have shown up to the protest.

What Really Happened In Gaza