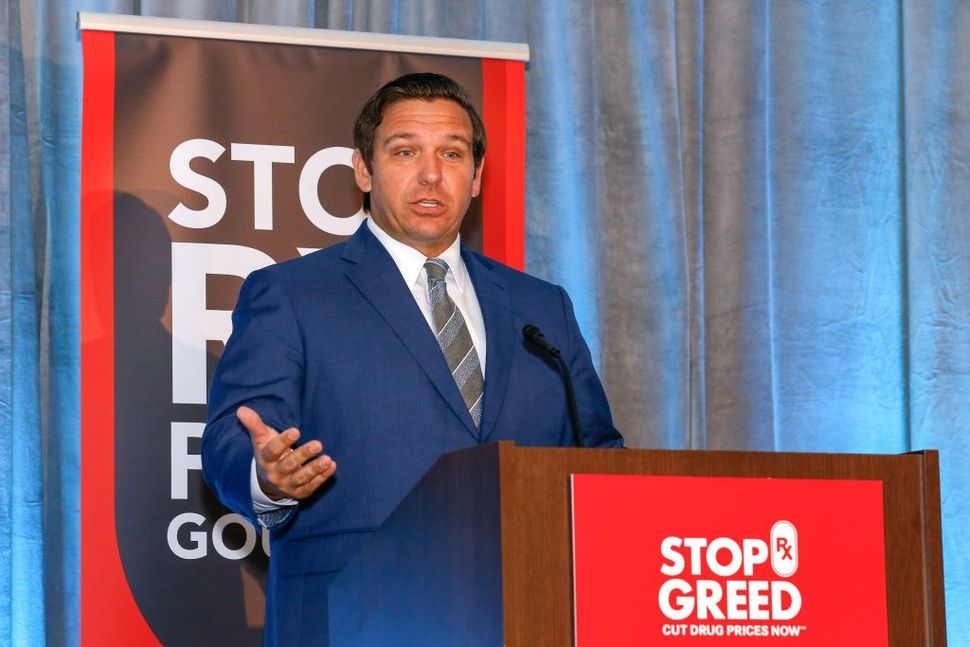 Florida Governor Ron DeSantis addresses the audience of the first of a series of “We Hear You” Town Halls to hear from older Americans about how the high cost of prescription drugs is affecting them at Florida State University’s Turnbull Conference Center on April 23, 2019 in Tallahassee, Florida. Image by Don Juan Moore/Getty Images for AARP

Florida Gov. Ron DeSantis will convene a meeting of the state cabinet in Israel later this month, the News Service of Florida reported last week.

DeSantis, a Republican, successfully ran for office last year promising to be the “most pro-Israel governor” in America. He said last week that while in the Jewish state between May 25-31, he may sign a bill recently passed by the state legislature that strengthens protections against anti-Semitism in public schools, Orlando Weekly reported.

DeSantis’s trip was planned with the state economic development agency Enterprise Florida, and the governor will be delivering the keynote address at the Israel-American Business Summit, the News Service reported. But it’s unclear how much taxpayers will be on the hook for transporting the entire state cabinet across the Atlantic – as well as how a cabinet meeting held in a foreign country will be able to comply with the state’s strong laws protecting public access to government procedures. The Florida Channel, the state-funded public access network, is not planning on covering the Israel cabinet meeting, the channel’s CEO said Monday, but a spokeswoman for the governor’s office said that all events in Israel “will comply with sunshine laws.”

Local and state-level political leaders often travel to foreign countries to drum up business opportunities in their areas, or to extend connections between minorities in their communities and their countries of origin. A number of mayors, including Los Angeles Mayor Eric Garcetti, are currently in Israel through a trip arranged by the American Jewish Committee.

Trips like Garcetti’s and DeSantis’s also have a political component, Politico’s Florida Playbook explained on Monday. “Past governors have made this same type of trip during their first year in office,” the newsletter wrote. “A pro-Israel message was a big part of DeSantis campaign, so the trip seems like a natural extension of that political message. DeSantis’ support of Israel is unquestioned, but follow the political math: Florida Cabinet meeting + bill signing + meeting with Israeli heavyweights = great future campaign fodder.”