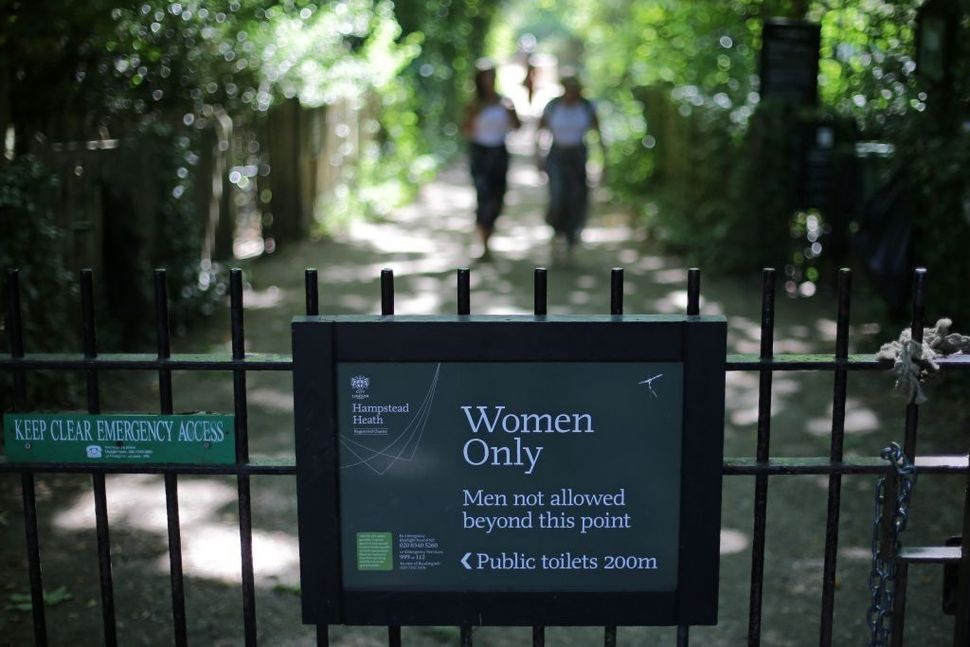 The sign indicating the ‘Women Only’ swimming pool is seen attached to gates on Hampstead Heath in central London on June 27, 2018. Image by DANIEL LEAL-OLIVAS/AFP/Getty Images

(JTA) — A women’s-only pond in North London will now be open to transgender swimmers, which will prevent Orthodox Jews from using the pond.

A group of haredi Orthodox women are planning to fight the decision, the London-based Jewish Chronicle reported.

Under Jewish law, women cannot be dressed immodestly in front of men. Trans women are still considered men according to Orthodox Jewish law, which prevents the women from swimming there.

The decision concerning the pond on Hampstead Heath was announced this week. Edward Lord, who headed the committee that approved the change, said it “will ensure our public services do not discriminate against trans people.”

Transgender women already are allowed to use the ladies’ pond, but the change means their right of access is now enshrined in formal rules, according to the Evening Standard.

A judicial review challenge is being prepared against the City of London’s decision, and the Orthodox Jewish women are expected to be part of it, the Jewish Chronicle reported. The decision came after a “public consultation,” according to the report.

The decision to allow trans women to use the pond is consistent with the city’s non-discrimination policy.

The Hampstead ponds also include one for men only and one for mixed swimming.