Republicans Donate To Marianne Williamson To Keep Her In Democratic Debates 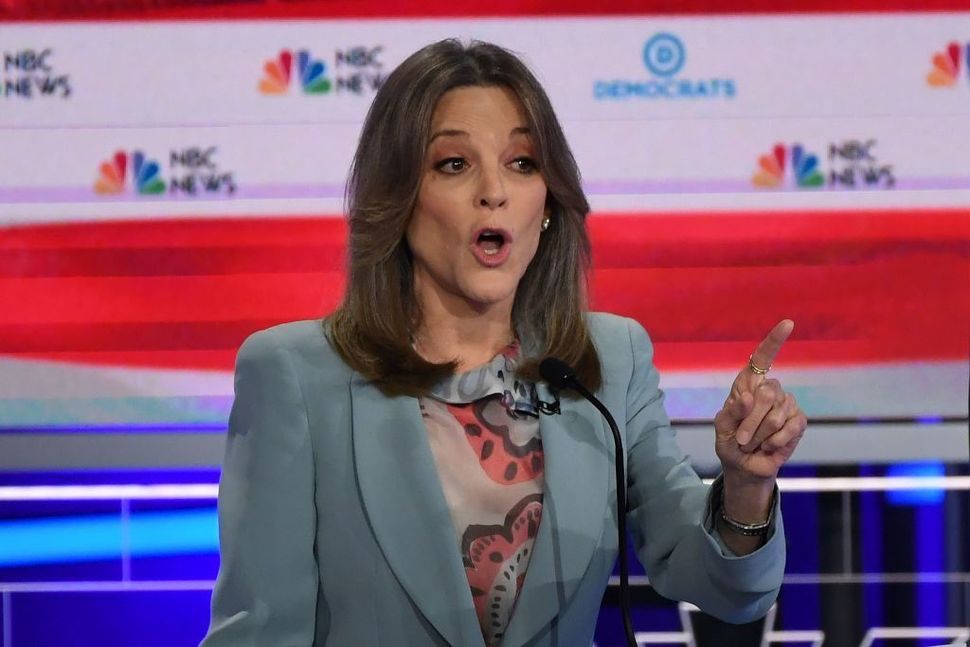 (JTA) — Republicans are opening up their checkbooks to keep Jewish self-help author Marianne Williamson in the race for the Democratic nomination for president.

It’s not they are falling in line with her idea to “harness love” to defeat President Donald Trump. It’s that they want to keep her in future Democratic debates. For her entertainment value.

Republican strategist Jeff Roe, who ran the 2016 presidential campaign for  Sen. Ted Cruz, R-Texas, posted a tweet at the end of the second debate on Thursday night calling on Republicans to donate $1 to Williamson’s campaign.

“Please, calling on all republicans to go to https://www.marianne2020.com/  and donate $1 to keep this vibrant democrat on the debate stage. One debate performance is not enough. #DemDebate2020,” he tweeted.

Another two nights of debates are scheduled for next month. But In order to appear in future debates, beginning in September, candidates for the Democratic presidential nomination must garner 2 percent of support in the polls, and at least 130,000 unique donors, according to requirements set out by the Democratic National Committee.

Republicans began responding to Roe’s call, according to USA Today, posting photos of the receipts of their campaign donations.

“So I, sir, I have a feeling you know what you’re doing. I’m going to harness love for political purposes; I will meet you on that field and, sir, love will win,” she said.

Please, calling on all republicans to go to https://t.co/fFZ5mdLRRq and donate $1 to keep this vibrant democrat on the debate stage. One debate performance is not enough. #DemDebate2020 https://t.co/MFHWVfHXey

Republicans Donate To Marianne Williamson To Keep Her In Democratic Debates