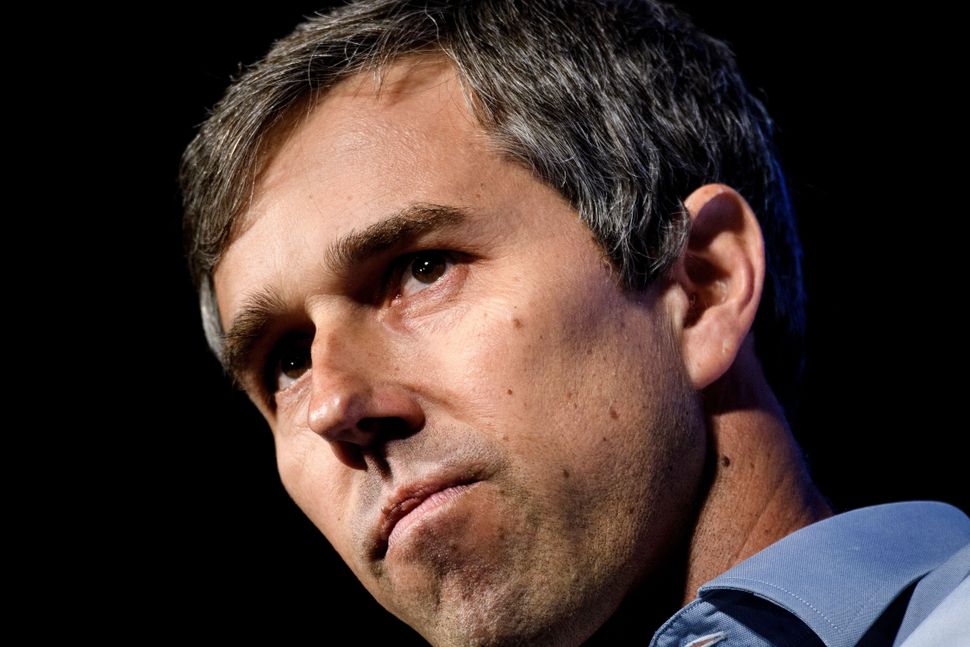 O’Rourke made the comments on Monday. Image by Getty

Beto O’Rourke compared a recent Donald Trump rally, at which supporters chanted “Send her back!” in reference to Rep. Ilhan Omar, to the Nazi party rallies at Nuremberg.

“Yes, President Trump is a racist,” O’Rourke told a reporter for ABC News in response to a question asking whether Trump is racist. “What we saw in North Carolina last week was almost an impromptu Nuremberg rally.”

O’Rourke made the comments while touring Ellis Island in New York City on Monday.

“What we saw in North Carolina last week was almost an impromptu Nuremberg rally.” https://t.co/W8IiWIyzvZ pic.twitter.com/3O4933X98r

At Trump’s event last week, a rally for his 2020 campaign, the crowd began chanting “Send her back!” after Trump mentioned Omar. Trump had previously suggested in a tweet that Omar and three other female Congresswomen of color “go back” to their supposed countries of origin. Trump’s comments in that episode received widespread condemnation and were widely labeled as racist.

O’Rourke in his comments referenced the infamous Nuremberg rallies from the 1920s and 1930s, immortalized in several propaganda films, most famous among them Leni Riefenstahl’s “The Triumph of the Will.” At the height of the Nazi party’s power in the years leading up to the German invasion of Poland, hundreds of thousands of Germans would attend the rallies to salute Hitler during the party’s annual conference. At the 1935 rally, Hitler introduced the Nuremberg Laws, which legally determined who was a German citizen based on Jewish ancestry.

O’Rourke’s comments come about a month over Rep. Alexandria Ocasio-Cortez (one of the four Congresswoman targeted by Trump) compared the detention centers at which people trying to immigrate to the United States are being kept as “concentration camps.” Her comments touched off a debate about to what extent current conditions and administration policies can be compared to things that happened in the lead-up to and during the Holocaust. Several high profile politicians, including Bernie Sanders, who is Jewish, publicly criticized Ocasio-Cortez for making the comparison.

While some prominent figures condemned Ocasio-Cortez, thousands of young Jewish protesters have barricaded Immigrations and Customs Enforcement offices and detention centers in recent weeks under the banner of “Never Again,” the refrain first meant to mean that there should never be another Holocaust.