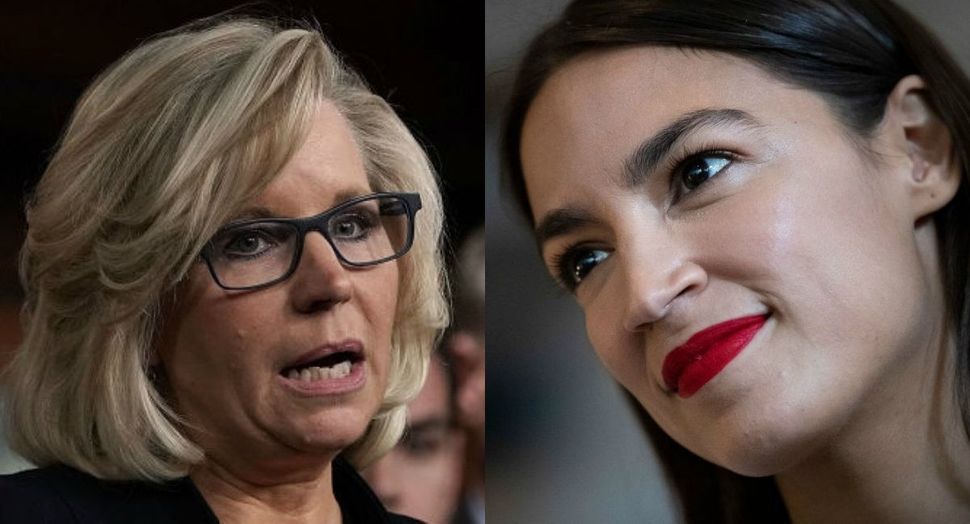 Question: When is it appropriate to describe a detention center for immigrants as a concentration camp? Meta-question: Millions of Americans, including intellectuals, politicians, and religious leaders, are engaging in this discussion — what does that tell us about America?

A fervent, raging discourse on this topic of naming immigrant and refugee detention camps has exploded in a place you might associate more with lighter fare — Twitter. The debate started with a description of the centers as “concentration camps” by lightning rod Representative Alexandria Ocasio-Cortez, and snowballed with a condemnatory tweet by Representative Liz Cheney.

But considering that the controversy centers around the way we remember the Holocaust, what are actual Jewish people saying?

We collected 18 searing tweets from both sides of the debate, from Jewish people.

You can join in with your opinion in this poll:

Is it ok to refer to the US government’s detention of immigrants at the border as “concentration camps”?

Just go ahead and pin this to the walls of Capitol Hill pic.twitter.com/3gntGiLh3S

Jew here. @AOC’s point is exactly why we say “Never forget.” The Holocaust did not begin with the murder of 6 million Jews. It began with the same dehumanization, deportation, and internment we see today. You, sickeningly, invoke the Holocaust to minimize their suffering. Shame.

Let me say this very clearly as the son of a Holocaust survivor: The only apology I want is from people who seek to weaponize false charges of antisemitism against the left while ignoring the very real threat of anti-Jewish hatred on the right pic.twitter.com/VHLBaDqFmM

She‘s well versed in this history. That’s how she recognizes it as it repeats. Liz, you should read #FacingHistoryAndOurselves https://t.co/ffAqUWFEZF

“You can’t make Hitler analogies until there are at least six million dead” say people who make Stalin analogies when the top marginal tax rate goes up by 3%.

There are an incredible number of lies people are trying to sell today to get people to look away from Trump’s concentration camps. Let’s dispense with one of the big ones: the idea that they can’t be camps because the conditions inside are fine.

That’s a lie. People are dying.

deeply appreciating Jewish Twitter & Historian Twitter for explaining why yes, these are concentration camps & yes, this is how it began (which doesn’t mean that’s how it has to end). The Nazis tested the public to see what it would tolerate. That means our moment is now.

Insisting that the Holocaust was uniquely evil and can’t be compared to anything else is a ploy to place it outside of history & politics.

People who do this are trying to distract from the obvious parallels with the campaign of escalating dehumanization happening here and now.

Wow. Yad Vashem directly calls out AOC for her comparison of U.S. immigrant detention facilities to Nazi concentration camps and asked her to learn more about the issue.

Really embarrassing to the people who tried to defend it yesterday. https://t.co/7YBcMNv5RZ

John Cusack pushes the “Jewish money controls everything” trope, AOC minimizes the Holocaust, but sure, Liz Cheney and Meghan McCain are the problem.

Wake up. We have concentration camps in America

How many times have we gone through the “detaining illegal immigrants is another Holocaust” cycle in the last two years?

This is at least round three.

Why do we treat this idiotic formulation as shocking and necessitating a full-bore response each time?

It’s more depraved than that. They’re using mock outrage over the memory of the Holocaust to minimize outrage over mass internment camps. https://t.co/DFl3AOjmG3

When it comes to arguing about calling them concentration camps, I’m anti-semantics.

As a Jewish American who spent his childhood attending family holidays with old folk who had numbers tattooed on their arms, I can’t tell you how repulsive @Liz_Cheney’s pandering and exploitative philosemitism is.

She needs to brush up on her history.https://t.co/bxy6UnFtRI

Hey, all the non-Jews voicing their opinions on concentration camps, we missed you on Holocaust Remembrance Day ?

And a few choice tweets from non-Jews:

I know what concentration camps are. I was inside two of them, in America. And yes, we are operating such camps again.