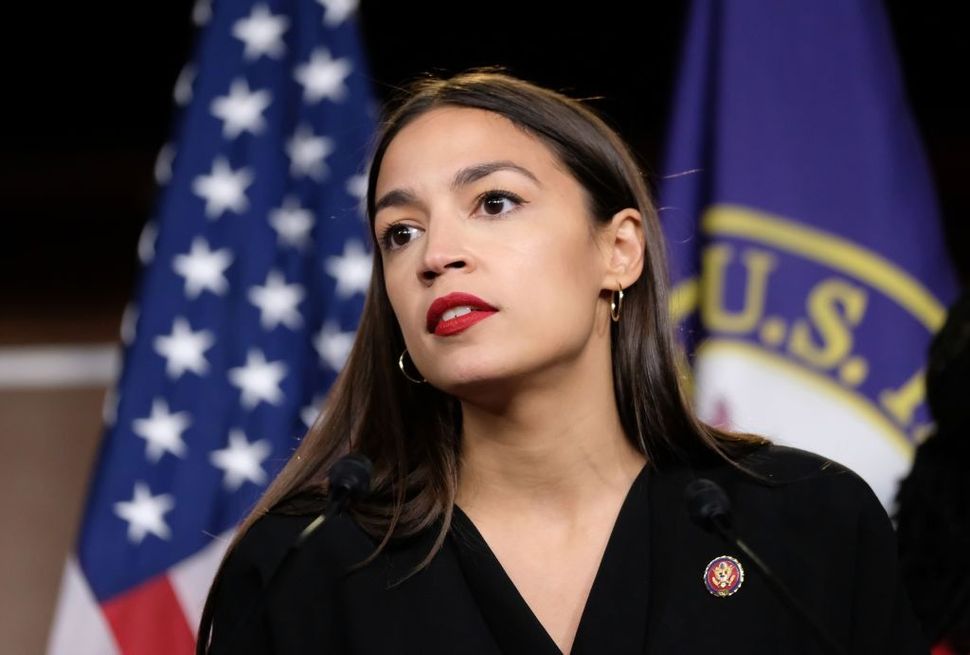 Rep. Alexandria Ocasio-Cortez speaks at a press conference at the U.S. Capitol on July 15, 2019. Image by Alex Wroblewski/Getty Images

Rep. Alexandria Ocasio-Cortez has signed on as a co-sponsor of Rep. Ilhan Omar’s resolution defending boycotts, a document that is widely understood as a specific show of support for the boycott, divestment and sanctions (BDS) campaign against Israel.

The resolution does not specifically mention Israel, but Omar told Al-Monitor before filing the resolution that the document was an “opportunity for us to explain why it is we support a nonviolent movement, which is the BDS movement.”

Ocasio-Cortez and Omar were two of 17 members of Congress to vote against a resolution condemning BDS last week.

“Ultimately it comes down to protecting free speech,” Ocasio-Cortez told BuzzFeed News after last week’s vote. “And my concern with being overly punitive on nonviolent forms of protest is that it forces people into other channels and I would hate to be a part of, you know, paving that kind of path.”

Omar’s resolution has attracted controversy because its preamble defends historic boycotts of Nazi Germany and apartheid South Africa — leading opponents to claim that the measure implicitly compares Israel to those two regimes.

The other two members of Ocasio-Cortez and Omar’s “Squad,” Reps. Rashida Tlaib and Ayanna Pressley, are also co-sponsors of the resolution — though Pressley, unlike the three others, voted in favor of the anti-BDS resolution. Pressley explained in a subsequent Twitter thread that she was an opponent of the BDS movement but wanted to show support for the right to boycott in general. Civil rights legend Rep. John Lewis, an original co-sponsor of Omar’s resolution who is also against BDS, shared similar language.

Rep. Tulsi Gabbard, a presidential candidate who voted for the anti-BDS resolution, signed on as a co-sponsor to Omar’s resolution on Tuesday. There are 15 co-sponsors in total so far.

Resolutions are symbolic measures that do not have the force of law.