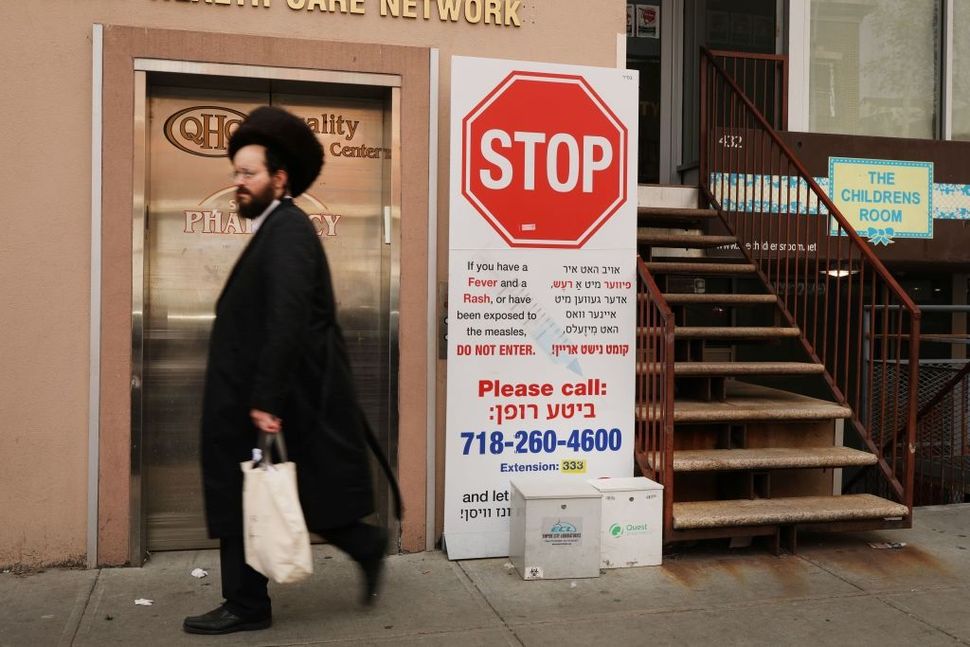 A sign warns people of measles in the ultra-Orthodox Jewish community in Williamsburg on April 19, 2019 in New York City. Image by Spencer Platt/Getty Images

(JTA) — The measles outbreak concentrated in Orthodox Jewish neighborhoods in New York City is considered over.

There have been no new infections over the last two incubation periods, signaling the end of the outbreak, city health officials said on Tuesday, The Associated Press reported.

This means that an emergency order mandating vaccines will be lifted, according to the report.

The order required people in those neighborhoods to be vaccinated or pay fines of up to $1,000.

“Staying up to date on vaccines is the best way for people to protect the health and safety of their friends, family and neighbors,” Barbot told the AP.

The outbreak began in October of 2018 and was mostly concentrated in Orthodox neighborhoods in Brooklyn. There were 654 cases reported up to Tuesday, which is the most in 30 years, according to the report.

In June, New York State lawmakers revoked the religious and personal-belief exemptions for vaccines. Unvaccinated students have 14 days from the start of school to prove they received the first dose of each immunization.

The Brooklyn outbreak has been tied to an unvaccinated child who contracted the disease during a trip to Israel.