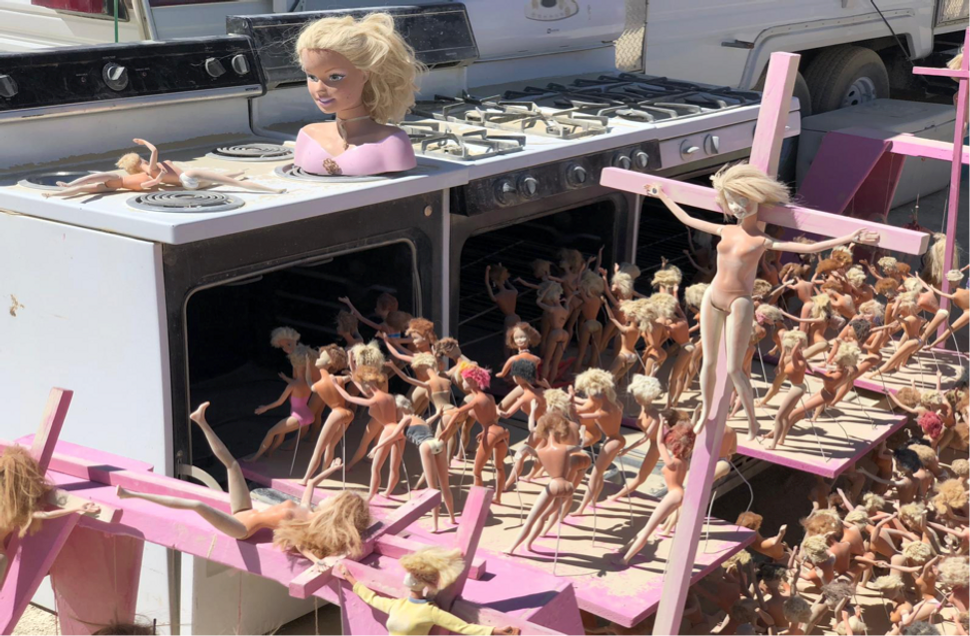 Burning Man is an annual gathering of 70,000-plus seekers, mystics, tech bros and influencers for nine days of zero inhibitions in the Nevada desert.

Many attendees bring their own art installations, fitting in with the event’s principle of “radical self-expression.” One such installation, which has been present since at least 2000, is surely radical: The Barbie Death Camp and Wine Bistro.

The installation features hundreds of Barbie dolls trapped between pink walls, with some depicted as marching into kitchen ovens at gunpoint (GI Joes are holding the guns).

The evocation of the Holocaust continues elsewhere: A sign above the installation claims that the installation is brought to you by “The Mattel Co. and Auschwitz Inc., Purveyors of Fine Lampshades and Soap Products Since 1939.” And in black on the bottom of the sign are the words “Arbeit Macht Plastic Frei,” a reference to the German words – translated as “work will set you free” – that hung on the gates of the Auschwitz concentration camp.

The creator of Barbie Death Camp, James Jacoby, told J Weekly that he is Jewish.

“We certainly don’t want to trigger anybody,” said Jacoby, who goes by the name “Doc Pyro” at the festival. “But Burning Man is not a safe space. It’s not Yale University. You don’t get to run and hide from something you don’t like. There’s 1,100 theme camps. If you don’t like ours, go to another one.”

“We have received a number of complaints,” Seth Brysk, the San Francisco regional director of the Anti-Defamation League, told J. “Certainly individuals have a right to free expression. But using that free expression to trivialize the Holocaust for the sake of political, social or artistic ends is still deeply offensive and inappropriate. And we would ask people not to do so.”

But another Jewish Burning Man attendee, Ron Feldman, told J that the installation was akin to Holocaust satire like the song “Springtime for Hitler” in “The Producers.”

“It’s ironic. It’s political critique and commentary,” he said. “It’s definitely not anti-Jewish in any way.”

Burning Man did not respond to a request for comment.