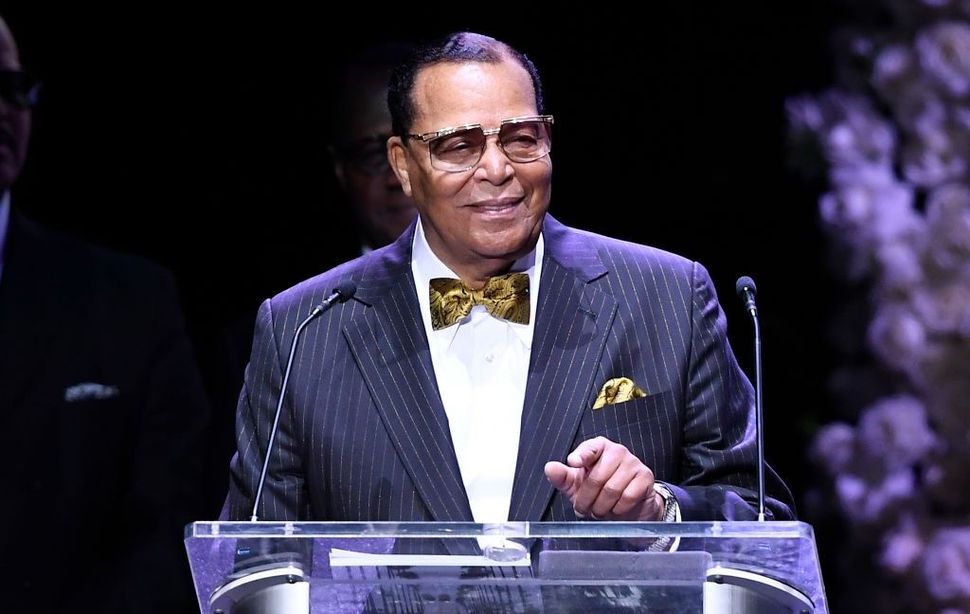 Minister Louis Farrakhan of the Nation of Islam speaks during the rapper Nipsey Hussle’s memorial ceremony at STAPLES Center on April 11, 2019 in Los Angeles. Image by Kevork Djansezian/Getty Images For All Money In Records and Atlantic Records

Farrakhan said it was “not an accident” that the United States Holocaust Memorial Museum in Washington is next-door to the Bureau of Engraving and Printing, where dollar bills are created.

“God would never have had to give commandments to the children of Israel, thou shalt not steal, if they weren’t crooked,” he also said.

Anderson continued to tweet positive things about Farrakhan until 2013, the Free Beacon reported. “[W]oke up watching the Honorable Minister Louis Farrakhan speak. Pretty good as usual,” he wrote in August 2010.

Anderson served as a regional field director for then-president Barack Obama’s 2012 reelection campaign and has more than decade of Democratic and progressive political experience, according to his LinkedIn account. He tweeted that he had begun working for the Buttigieg campaign on August 27. Buttigieg’s campaign declined to comment to the Free Beacon.

A Forward analysis in July found that Buttigieg had received the most money in campaign donations from Jewish donors out of all the Democratic presidential candidates.

But he was criticized by some Jews earlier for using the word “Pharisee” to describe religious hypocrites. The first-century Pharisees included the rabbis of the Talmud. Buttigieg’s campaign said in April that he would no longer use that term.

Buttigieg was also criticized for meeting in April with the Rev. Al Sharpton, the political activist who was blamed by many Jews, as well as civil rights activist Coretta Scott King, for inciting or exacerbating the 1991 Crown Heights riots with anti-Semitic rhetoric.