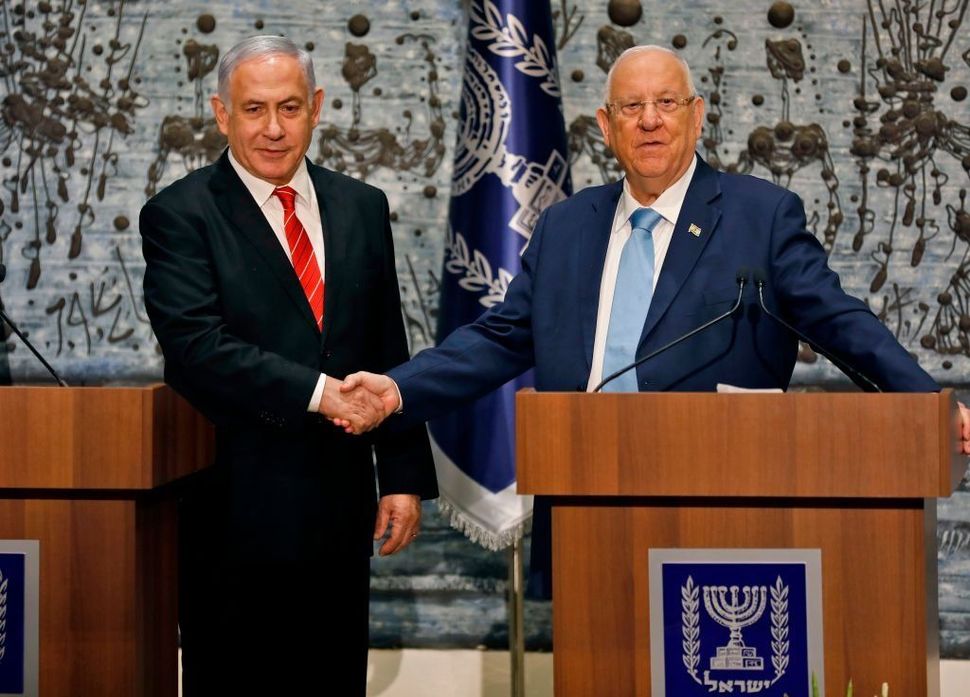 Israeli President Reuven Rivlin announced Wednesday that he was assigning Prime Minister Benjamin Netanyahu the responsibility of going first in his attempt to form a governing coalition.

Opposition leader Benny Gantz’s Blue and White alliance actually won one more seat in the Knesset than Netanyahu’s Likud party, but more elected Knesset members from all the elected parties endorsed Netanyahu for prime minister than they did his rival.

Israelis went to the polls earlier this month for the second time in a year after Netanyahu was unable to form a government coalition after the first election in April. Rivlin encouraged Netanyahu and Gantz this week to team up and form a unity government in order to avoid an unprecedented third election in 12 months. But talks between Likud and Blue and White were inconclusive, leading Rivlin to task Netanyahu with going first.

But Rivlin said he was still hopeful that a unity government would be formed. “The people don’t want another election,” he said at a press conference with Netanyahu.

The Prime Minister said he was open to “joint leadership,” but only if it was formed quickly.

No Israeli political party has ever won more than half of all Knesset seats, so any would-be prime minister has to reach agreements with smaller parties in order to build a governing majority.

There are 120 seats in the Knesset, and Blue and White won 33 seats compared to Likud’s 32. But party leaders representing 55 Knesset members told Rivlin that they wanted Netanyahu to be prime minister, while Gantz only got 54 endorsements.

Gantz originally had 57 endorsements, thanks to the support of the Joint List of Arab parties, which hadn’t backed a prime minister candidate since 1992. But three Joint List members representing the Arab nationalist faction Balad un-endorsed Gantz on Tuesday, citing his “Zionist ideology, his right-wing positions that are not much different from those of Likud, his bloody and aggressive military history,” and other factors.

Netanyahu will have up to six weeks to form a coalition, though it won’t be easy. For starters, there’s no way for him to get the 61 seats necessary without one party breaking its campaign promises about which other parties they’d refuse to partner with. Moreover, Netanyahu will face a pre-indictment hearing on October 2 in connection to accusations of fraud, bribery and breach of trust – all of which will likely distract and possibly embarrass the prime minister.

If Netanyahu fails, Rivlin will have the option to appoint Gantz or someone else in Likud to give forming a coalition a try. Gantz has maintained that he’s open to a coalition with Likud but not while Netanyahu is its party leader.

“Blue and White will not sit in a government whose leader is under indictment,” Gantz said in a statement on Wednesday, according to the Times of Israel. “This issue, along with other essential issues, are more important to us than any discussion on distributing ministerial portfolios or a rotation [of power.]”