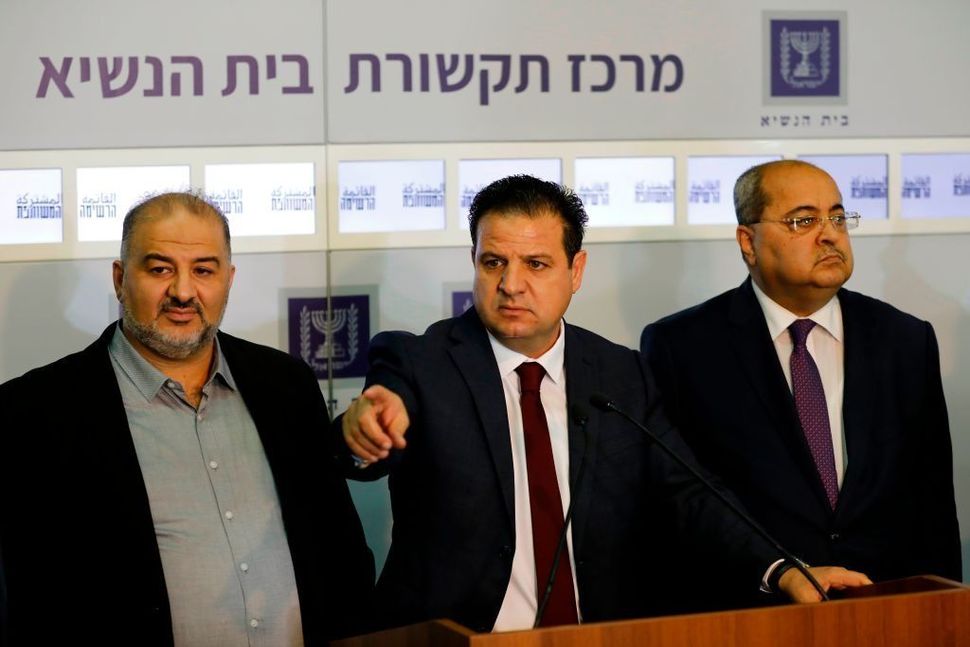 Members of the Joint List (from left) Mansour Abbas, Ayman Odeh and Ahmad Tibi speak to the press following their consulting meeting with Israeli President Reuven Rivlin to decide who to task with trying to form a new government, in Jerusalem on September 22, 2019. Image by MENAHEM KAHANA/AFP/Getty Images

JERUSALEM (JTA) — The Arab Joint List recommended to President Reuven Rivlin that Blue and White head Benny Gantz be tapped to form the next government in order to end the political career of Prime Minister Benjamin Netanyahu.

Joint List head Ayman Odeh explained his coalition’s decision in an op-ed published in the New York Times on Sunday. The article was posted at about the same time as the delegation arrived at the President’s Residence to make its choice.

Rivlin on Sunday afternoon began consulting with the political parties that earned seats in the Knesset to find out who they believe should form the next government.

“We will decide who will be the next prime minister of Israel,” Odeh wrote.  “This will be the most significant step toward helping create the majority needed to prevent another term for Mr. Netanyahu. And it should be the end of his political career.”

He clarified that although the Joint List would recommend Gantz, it would not officially join his government, but vote to support him from outside the ruling coalition.

“My colleagues and I have made this decision not as an endorsement of Mr. Gantz and his policy proposals for the country. We are aware that Mr. Gantz has refused to commit to our legitimate political demands for a shared future and because of that we will not join his government,” Odeh wrote.

The Balad Party, one of the four Arab parties that makes up the Joint List, was opposed to recommending Gantz because of his “Zionist ideology, his right-wing positions that are not much different than the Likud, his bloody and aggressive military history.” Balad representatives did not attend the meeting with Rivlin.

“As we warned, the Arab parties that oppose Israel as a Jewish and democratic state and glorify terrorists recommended Gantz for prime minister,” Likud said in a statement issued after the Joint List meeting with Rivlin.

“Likud will make every effort to establish a stable and strong government committed to maintaining Israel as a Jewish and democratic state. We can’t have a government that relies on Arab parties that oppose the State of Israel,” the statement also said.

Avigdor Liberman’s Yisrael Beiteinu did not recommend anyone during its meeting with Rivlin, the last meeting of the day. Liberman has said he will only support a national unity government with the Likud Party and Blue and White.