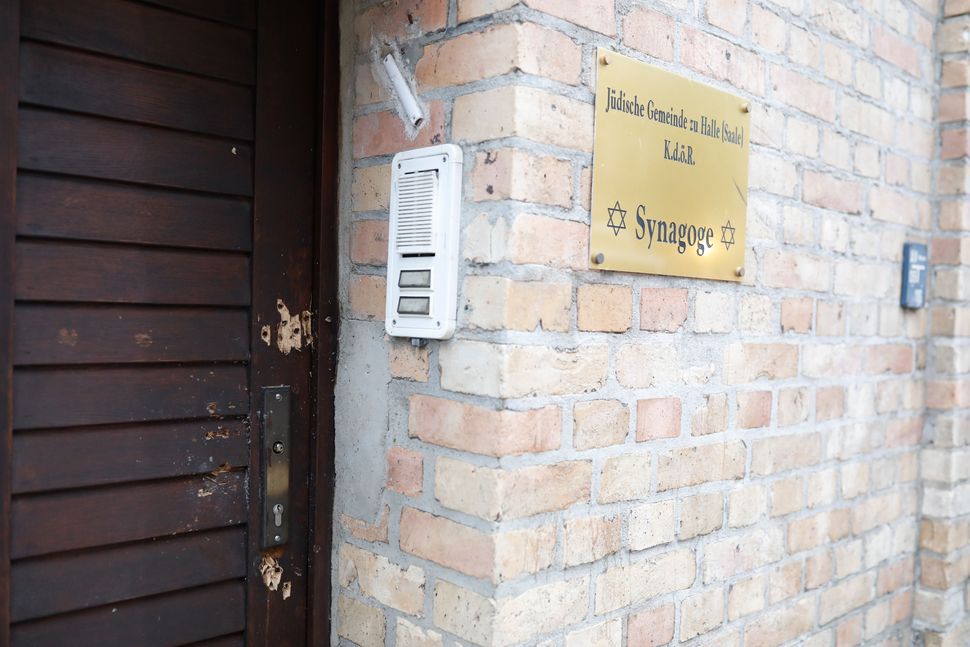 Bullet holes on the door of the synagogue in Haale. Image by Getty Images

On Yom Kippur, 51 congregants in a Halle synagogue watched the feed from security cameras as their would-be shooter tried to break down the door.

He pushed it, fired a few rounds with his gun and even attached an explosive to the jamb. The heavy wooden door wouldn’t budge, CNN reported..

The door and the security system were funded in part by a grant from the Jewish Agency for Israel, a major Jewish nonprofit, Max Privorovsky, a leader of Halle’s Jewish community told The New York Times.

The shooting came at a time of increased anti-Semitic and far-right activity in Europe. Earlier this year, German officials, heeding a rise in attacks on Jews, urged citizens not to wear kippot in public. During the first half of 2019, German authorities registered 8,605 hate crimes, 900 more than the first half of the previous year.

In other German cities like Berlin and Munich, armed guards are a fact of life for congregants. On Sunday in Berlin, a guard stopped an assailant from entering the city’s Neue synagogue. Halle’s synagogue did not have a guard at the door. No one inside the temple was shot. The gunman killed two: a pedestrian outside the synagogue and a diner at a nearby kebab shop.

“It was a miracle that the door held,” Privorozki told The Times. “I cannot imagine what would have happened if it had not.”

Anti-Semitic hate crimes in Germany rose in incidence by almost 20% in 2018. In the U.S., anti-Semitic crimes recently rose to the highest level in two decades, culminating in shootings in synagogue shootings in Poway, CA and Pittsburgh, PA. This year’s high holidays in America saw many synagogues taking new precautions, including using single entrances, denying entry to those without tickets, paying for private security and allowing licensed congregants to come armed.