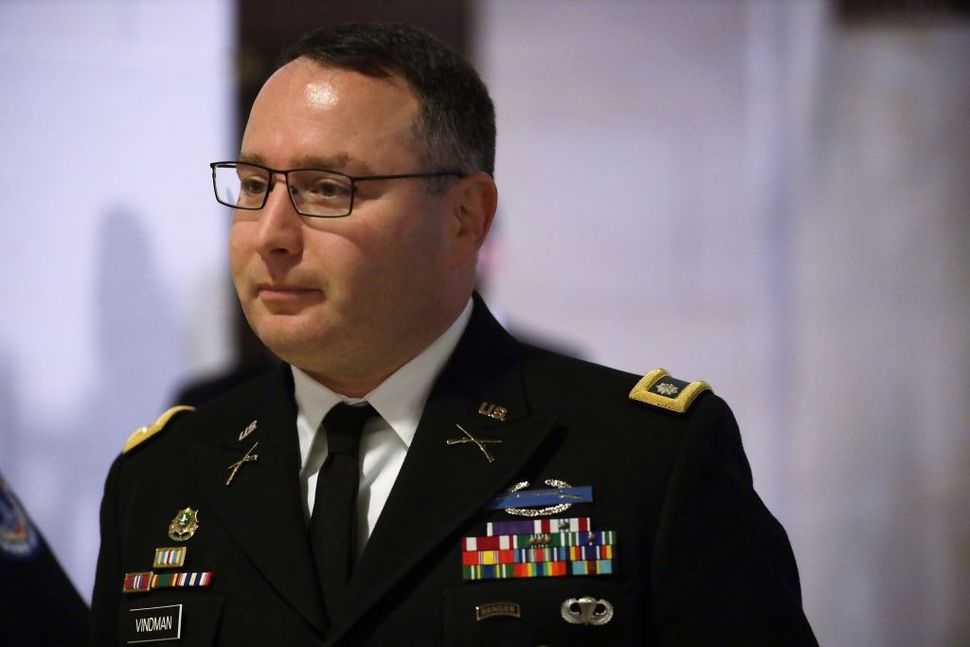 Lt. Col. Alexander Vindman, Director for European Affairs at the National Security Council, arrives at a closed session before the House Intelligence, Foreign Affairs and Oversight committees October 29, 2019 at the U.S. Capitol in Washington, DC. Image by Alex Wong/Getty Images

After reports emerged that National Security Council member Lt. Col. Alexander Vindman was set to testify to Congress about his discomfort with President Trump’s Ukraine policy and actions, conservative commentators began implying that Vindman, a Jewish former refugee from Ukraine, was disloyal to the United States.

“Here we have a U.S. national security official, who is advising Ukraine while working inside the White House, apparently against the president’s interests, and usually they spoke in English,” Fox News Channel host Laura Ingraham said on Monday, referring to Vindman’s interactions with Ukrainian officials who asked him for advice on how to handle Trump. “Isn’t that kind of an interesting angle on the story?”

“I find that astounding,” replied former George W. Bush administration official John Yoo. “And some people might call that espionage.”

Vindman was born in what was then the Soviet Union and came with his family to the United States in 1979, when he was four. “Fox and Friends” host Brian Kilmeade cited his immigration history to say claim that Vindman “tends to feel simpatico with the Ukraine.”

“We all have an affinity to our homeland where we came from,” former Republican Rep. Sean Duffy told CNN, adding, “He has an affinity, I think, for the Ukraine. He speaks Ukrainian. He came from the country and he wants to make sure they’re safe and free.” When asked by CNN host John Berman if he thought Vindman was looking out for America first, Duffy refused to say yes.

Sean Duffy on CNN on Army Lt. Col. Vindman: “It seems very clear that he is incredibly concerned about Ukrainian defense. I don’t know that he’s concerned about American policy … we all have an affinity to our homeland where we came from … he has an affinity for the Ukraine.” pic.twitter.com/dlsYlTnCwR

But not all conservatives were on board with that strategy. House Republican Conference chair Liz Cheney, a staunch Trump supporter, said at a press conference on Tuesday that it was “shameful” to question Vindman’s patriotism.