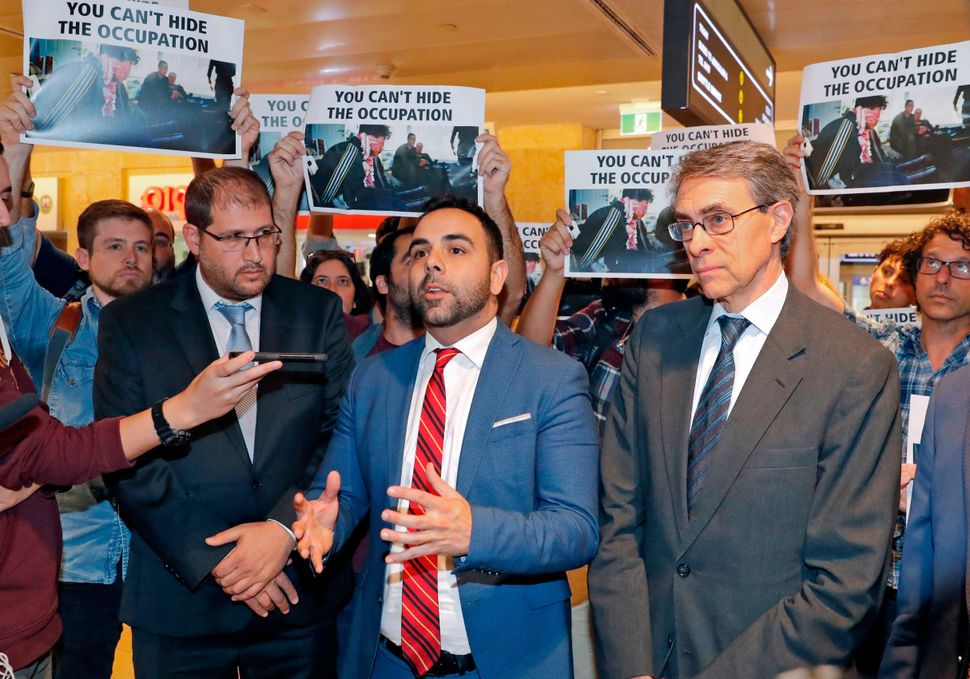 American citizen Omar Shakir (C), the director of the New York-based Human Rights Watch for Israel and the Palestinian territories, delivers a speech at Ben Gurion airport on November 25, 2019, after being expelled from Israel. Image by Ack Guez/AFP via Getty Images

The Israeli government expelled the Israel and Palestine director of Human Rights Watch on Monday, officials from the organization said, the first such deportation under a 2017 law targeting supporters of a boycott movement.

The director, Omar Shakir, departed after the Israeli Supreme Court ruled in favor of a deportation order from last year that had been delayed.

That order is linked to a 2017 law that allows the country to bar entry for individuals who are seen as advocating for a boycott of Israel. The law has been used numerous times to deny entry to people at Israel’s airport or borders — and was invoked by the Israeli government to dissuade U.S. Reps. Ilhan Omar and Rashida Tlaib from visiting Israel and the West Bank this summer.

But activists said that Shakir was the first person who was living in Israel to be removed under the law.

“Israel today joins the likes of Venezuela, Iran, and Egypt in barring Human Rights Watch researchers, but it, too, will not succeed in hiding its human rights abuses,” said Kenneth Roth, executive director of Human Rights Watch in a statement.

The organization announced that Shakir would continue his work in the region, only operating from the Human Rights Watch office in Jordan.

Its statement said that neither Human Rights Watch nor Shakir has actually called for a boycott of Israel, only urged businesses to cease operations in settlements in the Israeli-occupied West Bank.

Israel opted not to renew Shakir’s work visa in May 2018 on the grounds that he tried to get Israel suspended from FIFA and promoted a boycott on social media, Haaretz reported.

Shakir challenged that decision in court, but the ruling was upheld in April. Then, Shakir’s appeal was heard in front of the Supreme Court, but was rejected earlier this month. He was given until today to leave the country.

Today Israel deports me, culminating 2.5 year effort to muzzle human rights advocacy. But its done the opposite: it has made plain Israel’s disdain for intl norms, unified human rights community & @hrw work on Israel/Palestine will continue w/ me at helm from outside #WhoisNext pic.twitter.com/hHpXbW2Z73

“Goodbye, everyone! I’ll be back!” – @OmarSShakir, Human Rights Watch’s Israel-Palestine Director being deported today by the Israeli government for his human rights advocacy, leaving the press conference and heading to the airport… pic.twitter.com/mczUwrMWXl