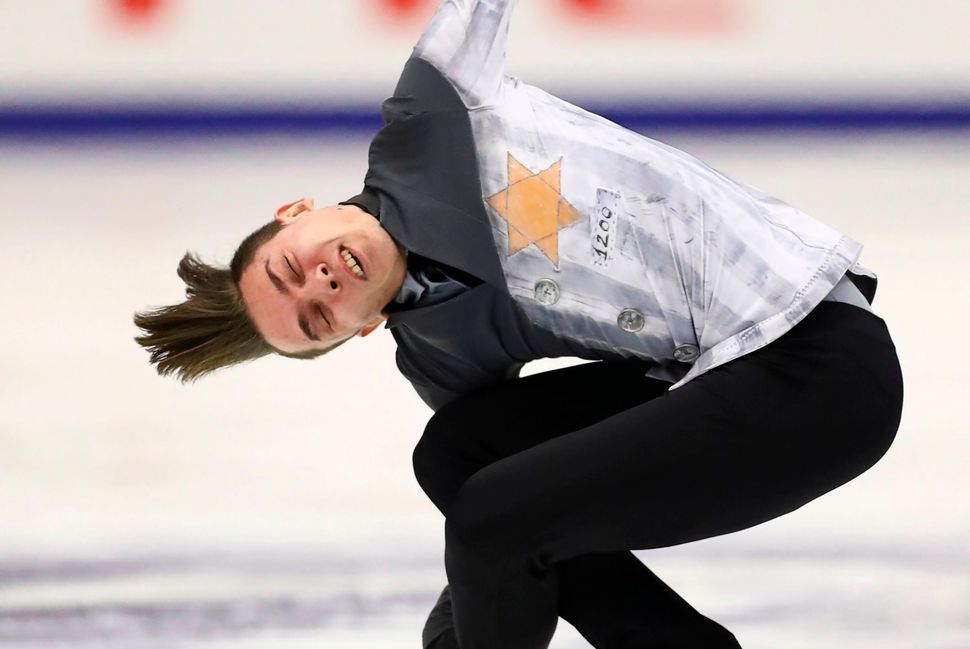 Russia’s Anton Shulepov performs in the men free skating at the Grand Prix of Figure Skating 2019/2020 NHK Trophy in Sapporo on November 23, 2019. Image by JUNKO KIMURA-MATSUMOTO/AFP via Getty Images

A Russian figure skater who recently competed wearing an outfit that is half Nazi-concentration camp guard and half-Jewish prisoner has been nominated for the International Skating Union’s award for best costume.

Anton Shulepov was listed Sunday among the 52 individuals or teams nominated for the ISU’s first annual best costume award.

Shulepov’s entry on the ISU’s online ballot originally featured an image of his free skate costume, the half-victim/half-oppressor getup that he skated in last month accompanied by the theme from “Schindler’s List.”

But after an online outcry, the image was changed to his short program costume of a dark sweater with black slacks, with the ISU claiming that he was actually nominated for his boring costume and not his flamboyant one.

“The ISU regrets that by error the wrong costume (Free Skating instead of Short Program costume) of Mr. Shulepov has been presented for voting,” the organization wrote on Twitter. “This error has been corrected and the ISU sincerely apologizes for this mistake and the bad sentiments it has caused.”

Many people on social media didn’t buy it.

You’re only making this worse, and frankly, it comes across to us Jewish fans as a crap move by a crap organization because a) we called you out, and b) people started tagging Jewish organizations over how wrong it was and is. DO BETTER.

i sincerely doubt you meant to reward a black turtleneck, but regardless of your intent in nominating shulepov, he shouldn’t be allowed to perform in the FS costume. this goes beyond “bad sentiments” or appropriation, it’s turning genocide into cosplay and you’re validating it.

Shulepov has worn his Holocaust-themed costume throughout this skating season, including as recently as the NHK Trophy event in Japan on November 22-24.

Anyone is eligible to register to vote for the awards. Balloting will continue until February 10th.