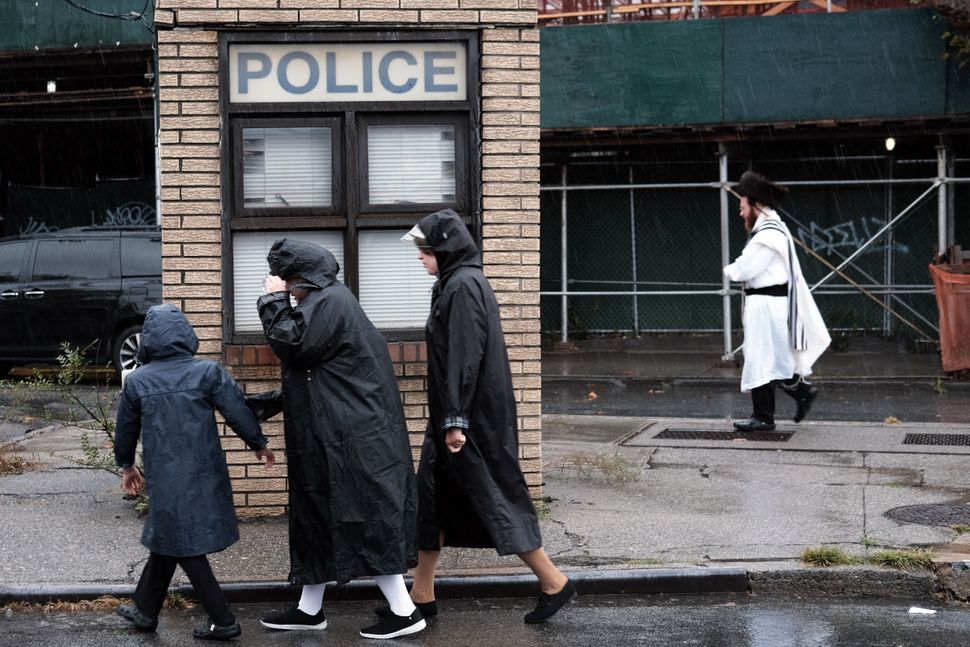 Orthodox Jews walking in Brooklyn on October 9, Yom Kippur, earlier this year. Most of the Jews targeted in assaults in New York are Orthodox and visibly Jewish. Image by Getty

(JTA) — A Jewish man wearing a yarmulke was physically and verbally assaulted in Manhattan in one of three assaults against Jews in New York in just over a 24-hour period.

The alleged assailant, Steven Jorge, 28, reportedly punched the 65-year-old victim in the face, knocking him to the ground, and then kicked him repeatedly. He also allegedly yelled “F**k you, Jew” at the victim, who was looking at his cellphone when the attack began, CBS New York reported.

The NYPD Bias Unit is investigating, according to CBS.

The attack was one of three assaults against Jews in New York in 24 hours, according to the Anti-Defamation League.

Instances of anti-Semitic hate crimes have spiked in New York this year. Hate crimes against Jews appear to be getting more violent, while Orthodox Jews are overwhelmingly targeted for such assaults.

On Tuesday afternoon, a Jewish man was assaulted by a group of teenagers in the Brooklyn neighborhood of Crown Heights. The teens followed the victim down the street, with one hitting him in the head and knocking him to the ground.

The third incident was reported as a case of aggravated harassment in Brooklyn, according to the ADL.

“We are appalled at the sheer frequency and aggressive nature of these incidents,” said Evan Bernstein, regional director for ADL New York and New Jersey. “They’re made particularly heinous by the fact they are occurring during a time when society is supposed to come together in peace for the holidays, and as the Jewish community is particularly on edge as it’s reeling from the deadly attack in Jersey City on Dec. 10.”