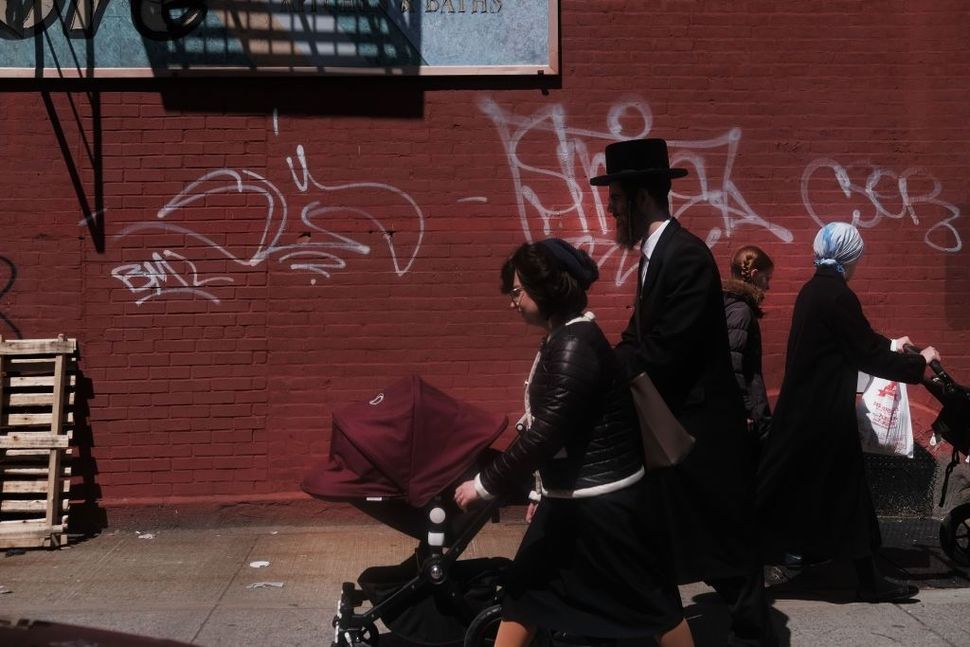 NEW YORK, NEW YORK – APRIL 10: People walk through an ultra-Orthodox Jewish community in Williamsburg on April 10, 2019 in New York City. As a measles epidemic continues to spread, New York City Mayor Bill de Blasio recently announced a state of emergency and mandated residents of the ultra-Orthodox Jewish community in Williamsburg at the center of the outbreak to get vaccinated for the viral disease. Those who choose not to will risk a $1,000 fine. (Photo by Spencer Platt/Getty Images) Image by Getty Images

You’ve all heard the story: A Haredi Jew violently assaulted in broad daylight somewhere in New York City. It happens so often now, with what is almost a chilling regularity, it’s virtually impossible to miss. According to the NYPD, anti-Semitic hate crimes have skyrocketed in the past year; the 145 complaints so far in 2019 alone are sharply up from 88 in that same time frame a year earlier — a year which itself saw a 22% increase from 2017.

As Tablet Magazine’s Armin Rosen put it so pithily, “Everyone Knows.” And yet, as Forward Life editor Avital Chizhik-Goldschmidt pointed out yesterday, nobody cares.

After every attack, the same playbook repeats itself: The perfunctory condemnations from elected officials roll in and out, barely stopping for a moment to take a breath. It’s better than nothing, I suppose, but not much better.

Why does no one care? Because the past few decades have seen a steady increase in the otherization of Orthodox Jews, to the point where we are being attacked with bricks and no one cares.

The replies to Chizhik-Goldschmidt’s article on Twitter were instructive. So many were filled with people — other Jews — blaming Orthodox Jews for what has been happening to us. A friend — not Orthodox — texted me in shock at the replies. I was not shocked. I got some of that same treatment last night when I shared an utterly offensive video the Republican Party of Rockland County posted to their Facebook page, which portrayed Orthodox Jews as an invading host that is threatening the good white folks of Rockland. It’s your fault that people hate you.

If you thought the anti-Semitism was a “left/right” thing, I have news for you. Republican Party of Rockland County posts this overtly Naziesque video, saying the Jews are threatening “our homes, our families, our schools, our water, our way of life.”pic.twitter.com/n6mvP63jSY

No other minority group in this country would be subjected to this sort of rhetorical abuse — to say nothing of the violent attacks — and see the same sort of wholesale hand-waving we see when Orthodox Jews are abused.

But it doesn’t start with physical violence. It starts when people deliberately otherize Haredi Jews in pursuit of whatever their agenda happens to be. The Rockland County issue is perhaps most overt, but similar situations are playing out further upstate, in Kiryas Joel and Chester, and in New Jersey towns bordering Lakewood where I live. In each of these instances, Jews are portrayed as greedy developers, outsiders who want to “invade” these towns, with misinformation about their supposedly nefarious plans spread via Facebook pages which do more than just dabble in overt anti-Semitism.

People feel embattled by change that features new neighbors who speak strange languages, commit no violence and double the value of your real estate.

Somehow, when it comes to Orthodox Jews, people allow themselves to give voice to the kind of bigotry that if they are unlucky enough to feel towards any other minority, they know to keep to themselves.

And instead of calling it out for what it is, the media just parrots these “concerns” devoid of any context as to the motivations of the people who are asserting them — providing the necessary validation for these smears, as though there are “two sides” on issues of anti-Semitism. While the New York Times reported that the former and current town supervisors of Chester once said that “every day” they are “doing what we can to alleviate 432 Hasidic houses in the town of Chester,” they also allowed them to assert that they were not motivated by anti-Semitic animus, (“It’s not anti-Semitic to say it’s going to be a Hasidic development”) but that “They want to get more than what they are entitled to.”

Just this week, NBC New York’s Sarah Wallace interviewed proud members of one such anti-Semitic Facebook group that routinely posts about the County Board, which, per the Facebook posters, has “sold out for a couple of sheqels,” because “the law only applies to certain people and doesn’t apply to others.” Wink, wink.

Another smear campaign which has had a similar effect is the one concerning the regulation of secular instruction in Yeshivas across New York State. Hysterical calls for “emergency regulations” abound, as those behind the effort solicit others who know nothing about Yeshivas to their aid. They represent the graduates of Haredi Yeshivas as the perpetually poor and ignorant, forever dependent on — and taking advantage of — the public dole.

It doesn’t matter that those who have actually researched Yeshivas have come away with an entirely different picture, one that allows for cultural differences while respecting others as individuals. To them, the numbers are irrelevant, the control over curriculum must be wrested away from the Rabbis who are responsible for what they assert — publicly — is wholesale abuse and neglect.

The recent outbreak of measles certainly did not help matters, because it allowed those same people to advance the same sort of tropes they use in their effort on education. Thus, Naftuli Moster, executive director of Yaffed — the organization behind the education campaign — accused Mayor de Blasio of “pandering to that the reason why the Hasidic community had such a low vaccination rate was due to “insularity” and because “science is not really taught.” Some stopped talking this way after vaccination rate numbers released by the New York State Health Department proved this to be false — the average vaccination rate in Jewish K-12 schools being above that which is assumed necessary for “herd immunity.” But as Emma Green pointed out in The Atlantic, while the measles outbreak is more or less behind us, “The outbreak of anti-Semitism, however, might prove much harder to contain.”

We Haredi Jews are the most visible of the Jewish community, and our tradition of what is right and what is wrong often flies in the face of what contemporary thinking is on any given subject.

As a result, we have been continuously otherized and — perhaps worse — deindividuated, to the extent that people no longer consider us as individual people. Needless to say, where nobody is all that human, everything is on the table. It’s why people would believe everything negative — no matter how ludicrous — about a Haredi Jew. It’s why media wouldn’t stop for a second and think that it might just be inappropriate to present anti-Semitism as anything but what it really is — hate.

And it might just be why people can beat other people with a paving stone while the world just shrugs and moves along.

Eli Steinberg lives in Lakewood, New Jersey with his wife and five children. They are not responsible for his opinions, which he has been putting into words over the last half-decade, and which have been published across Jewish and general media. You can tweet the hottest of your takes at him @DraftRyan2016.