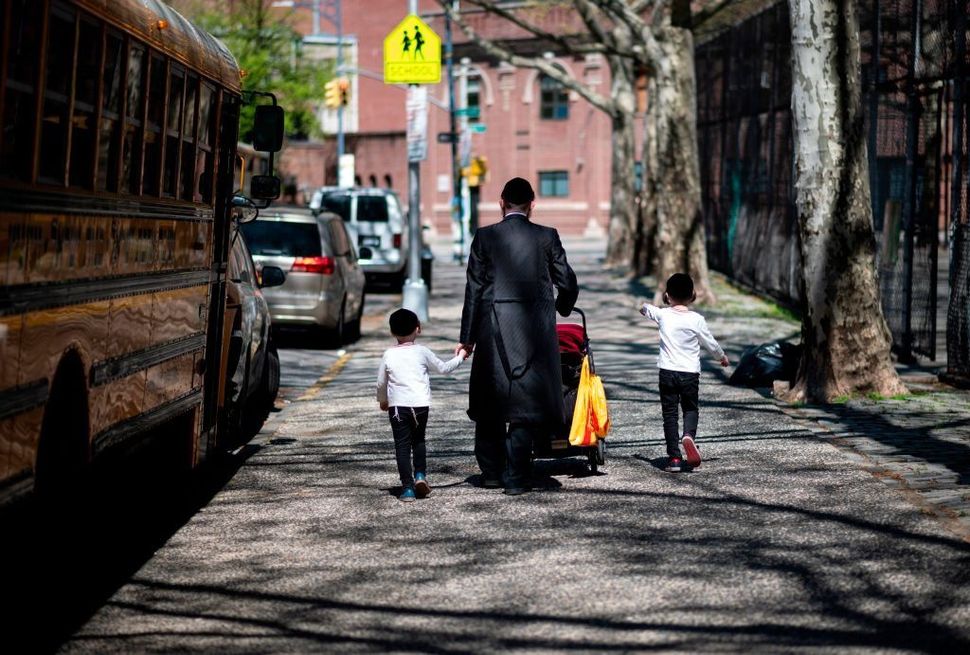 A Jewish man walks with his children down a street in a Jewish quarter in Williamsburg Brooklyn in New York City on April 24, 2019. – A New York county hit by a measles outbreak declared a state of emergency in March 2019 and banned non-vaccinated minors from public places in a bid to prevent the once-eliminated disease from spreading. Vaccinations are in theory required to go to school in the United States, but 47 of the 50 states — including New York — allow exemptions, notably for religious reasons. In New York, an Orthodox Jewish community in Brooklyn has been hardest hit. They were infected by visitors from Israel, where an outbreak of measles began a year ago. (Photo by Johannes EISELE / AFP) (Photo credit should read JOHANNES EISELE/AFP/Getty Images) Image by Getty Images

Over generations, no matter their religious practice, Jews have shared a commitment to educating their children. In New York, the government has set the standards for that education and taken the legal responsibility to ensure that every child in every school, whether public, private or religious, receives an education that meets those standards. And yet, we find ourselves in an extraordinary situation, where rabbis in some of our most vulnerable communities have chosen to deny children the secular education they are entitled to and relegate them to a life of poverty and dependency. It is even more disheartening that our elected officials have chosen to be complicit in this disgrace.

For decades, yeshivas have received millions — if not hundreds of millions — of tax dollars from New York State lawmakers for transportation, security, lunch, textbooks, and even academic intervention services. Some yeshivas cover as much as two-thirds of their budget with public funds.

Yet, we have little to no accountability for that money, even as certain Ultra-Orthodox leaders openly flout state law which requires all nonpublic schools to provide an education that is “at least substantially equivalent” to public schools. That’s because lawmakers have historically prioritized politically powerful voting blocks ahead of student wellbeing, and they’re doing it on our dime.

The fact is we have no idea if these schools are even in compliance with state educational requirements to teach secular studies, but we have reason to suspect that they’re not. According to a report commissioned by Young Advocates for Fair Education (YAFFED) in 2017, Hasidic boys receive only 90 minute or less of secular instruction a day in elementary school, and none in high school. This leaves them unable to read and write in English, perform basic math, or understand the science behind vaccines.

It’s an ongoing crisis, but despite recent efforts by the New York State Education Department (NYSED) to implement very basic oversight, these Ultra-Orthodox leaders are fighting to keep our children in the dark ages. Pilpul and gematria are simply not a substitute for writing a clear English sentence and understanding basic math concepts.

In April a consortium of yeshivas and Catholic schools (and even some elite private schools) filed suit against the state basically claiming religious freedom from oversight. Mind you, the state’s very reasonable guidelines would’ve entailed an inspection only once within the next two to three years, and then once every five years thereafter to see if schools can show they provide academically rigorous instruction in required subjects, including the five core classes: English, History, Science, Mathematics, and Civics. But a judge ruled against the state on procedural grounds, and now the yeshivas are back to business as usual.

This is not only a shonda for the Jews, but for our democracy. Too many politicians are happy to provide cover — and money — to institutions that proudly shut their doors to regulation but welcome our cash, no strings attached. That’s outrageous and it’s got to stop. If an institution funded by the taxpayers is unwilling to allow state education inspectors onto their premises twice every decade, they shouldn’t be receiving taxpayer funds. Period. But politicians are willing to waste our money because a handful of Rabbis can make or break them at the ballot box. That’s why we have a moral and social obligation to speak out, both as Jews and as New Yorkers: the state must enact emergency regulations immediately.

The state’s requirements for substantial equivalency are straightforward and do not pose an unreasonable burden on private schools genuinely seeking to provide their students with a comprehensive education. According to the Education Department’s guidelines, such instruction would amount to around three-and-a-half hours per day of secular education. Catholic and elite private schools would easily clear the mark, and most Jewish schools would as well.

It’s time for lawmakers to do their job and put children — and their civic responsibility — first.

Susan Lerner is the Executive Director of Common Cause/NY and Ester Fuchs is a Professor of International and Public Affairs and Political Science at Columbia and former senior advisor to Mayor Bloomberg.