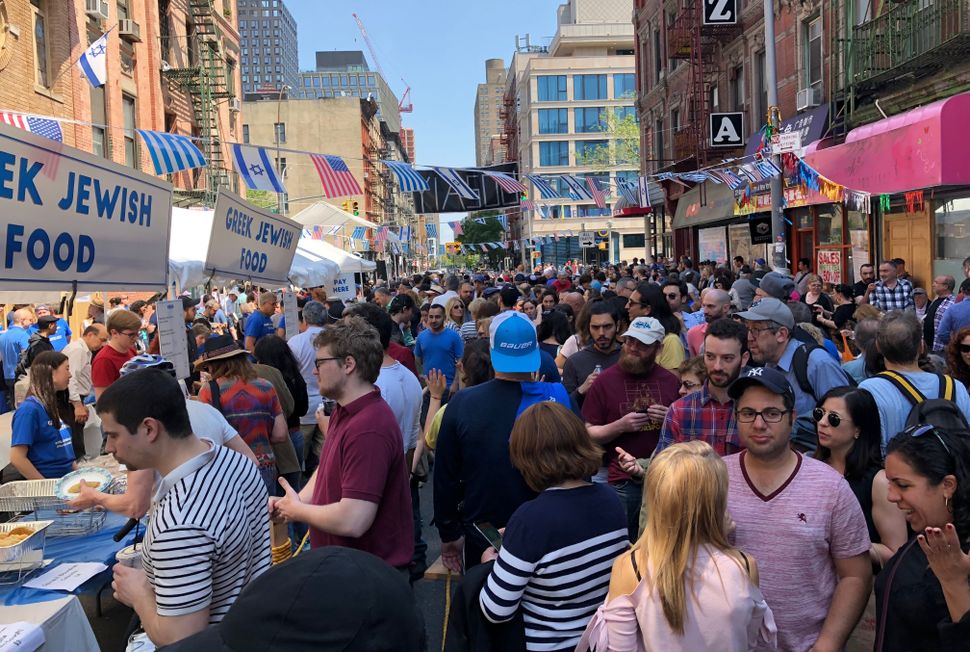 An estimated 10,000 people came through the festival over six hours. Image by Ari Feldman

I say, “Jewish Lower East Side.”

Those foods, as Jewish and as native to LES as schmaltz and herring, were on sale by the thousands at the fifth annual Greek Jewish Festival, hosted by Kehila Kedosha Janina, a nearly 100-year-old synagogue on Broome Street that preserves a rare strand of Greek Judaism.

The festival is part of KKJ’s efforts — and those of Greek Jews around the world — to revitalize the heritage of one of the world’s oldest Jewish communities. And yet it is a novelty in its own right: A loud, proud, public celebration of a culture that was strangled and then nearly destroyed utterly in its home country. For Greek Jews who attended Sunday, it provoked nostalgia, hope and that peculiar feeling of knowing that in order to preserve a fading culture, you must change it.

“It’s very incongruous,” said Arielle Angel, the editor of the quarterly magazine Jewish Currents, whose father’s family came to the U.S. from Greece after the war. “The sense of real loss of culture that is the fact of a lot of Greek Jewish life, in contrast with this event full of people, it’s kind of, like, you get whiplash.”

KKJ’s congregation was founded in 1906, by immigrants from the historic Jewish hub of Ioannina, in western Greece. It is widely known as the only synagogue in the Western hemisphere that carries on the Romaniote tradition, the ancient strand of Greek Judaism — neither Ashkenazic nor Sephardic — that is more than 2,300 years old, and predates the Diaspora from the ancient Israelite kingdoms in Israel.

Now, however, the synagogue is home to a mosaic of various Jewish heritages: part Romaniote, part Greek Sephardic, with elements from the various lineages of Jewish communities around the Mediterranean thrown in from immigrants the community welcomed throughout the 20th century. Though its nearly 100-year-old building has been in continuous use its entire life, attendance has dwindled as families have moved to the outer boroughs and suburbs. On Yom Kippur last fall, services saw about fifty people in the chairs around its Sephardic style bimah. 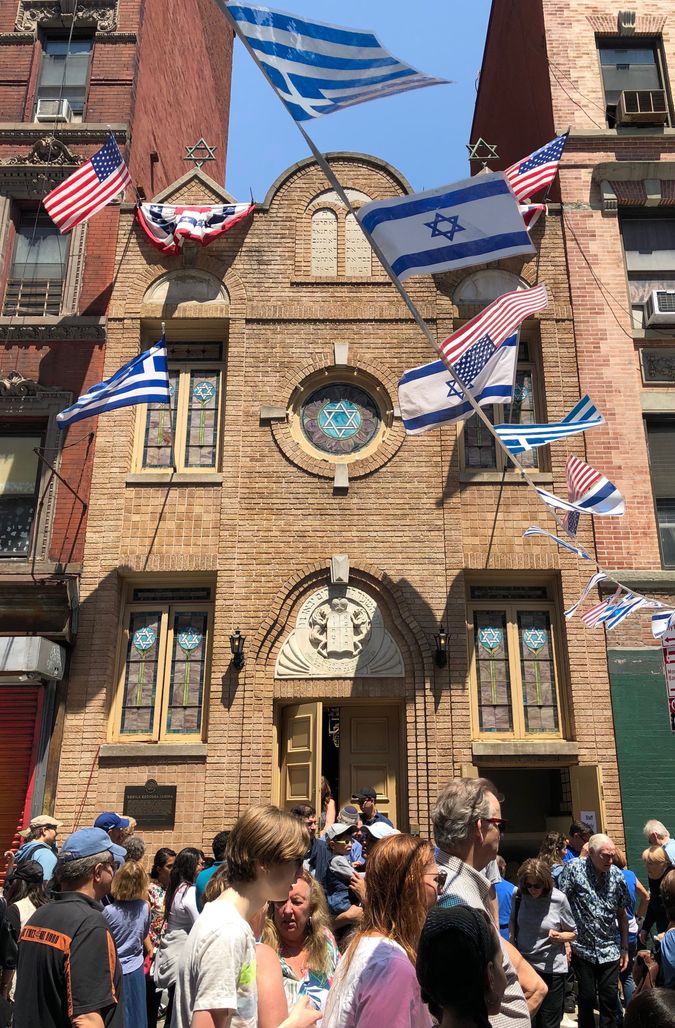 Kehila Kedosha Janina, on Broome Street in the Lower East Side. Image by Ari Feldman

The festival is the brainchild of the Marcus family: Marvin Marcus, the current president of the synagogue, and his son Andrew, a member of its board of trustees, coordinate the festival each year. The younger Marcus, 27, was raised across the Manhattan Bridge in Downtown Brooklyn, but spent nearly every Shabbat at KKJ — a Forward article about KKJ from 2004 attests to that fact.

Each year, the festival, held in front of the historic synagogue just around the corner from the Tenement Museum, has grown in popularity. Andrew Marcus said they estimated 10,000 people passed through this year.

It was the perfect early summer day for a festival: hot enough for a couple tourist bros here and there to go shirtless, not so hot that you feel like the concrete jungle was baking you from the feet up.

The crowd was a mix of Jews from both within and without the Five Boroughs, along with Chinese and Hispanic New Yorkers who live in the area and the ineluctable troupes of hipsters and hypebeasts pausing on their afternoon crawls to boozy brunches and retail shopping to hear the electric mandolin or sample the koulourakia, delicious Greek butter cookies. Representatives from every constituency could be seen in the area cordoned off for dancing at one point or another throughout the afternoon.

Click here to see a video of one of bands that performed Greek Jewish and Sephardic music at this year’s festival, taken at the 2017 festival.

Yet the festival was primarily a chance for Greek Jews from the Tri-State area to bask in the kind of celebration of Greek Jewish culture that rarely happens anywhere, let alone in Greece — for lack of numbers, if not lack of pride.

In the decades leading up to the Holocaust, Greek Jews were subject to pogroms in places like Thessaloniki, (also called Salonika) home to the country’s largest population of Jews. Yet because those cities were adjacent to countries that were cooperating with the Nazis, the Greek Jewish community was deported to Auschwitz-Birkenau — and liquidated there — extremely quickly. As much as 90% of Greece’s prewar Jewish population was murdered, likely a higher proportion than any other country. 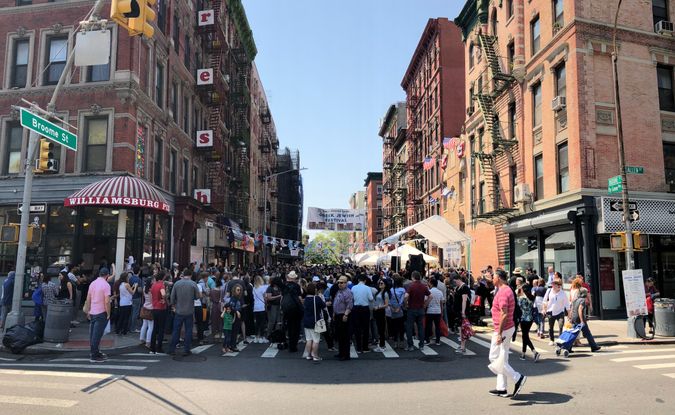 The crowd at the Greek Jewish Festival, from across Allen Street. Image by Ari Feldman

David Gatenio, one of the festival’s main funders, lost much of his family in the Holocaust, and came to the U.S. as a small child. His father owned a clothing store a few blocks over from KKJ. Now, Gatenio, 72, is known by the porcelain Zeus heads he has affixed to the dozen-or-so properties he owns around the city. “To guard the buildings,” he says.

He still lives his Greek Jewish heritage: When asked about what the festival means to him, he told his family’s story, from the destruction of his many relatives in the Holocaust, to the ghetto keepsakes he took from Greece that he has donated to Holocaust museums.

As he mentioned his home city of Drama, others around him could be heard playing Greek-Jewish geography: ancestors from Athens, from Thessaloniki, from Volos. At one point, Gatenio stopped mid-sentence to strut Greek-style in his seat, elbows out, when the theme from “Zorba the Greek” came on over the speakers. 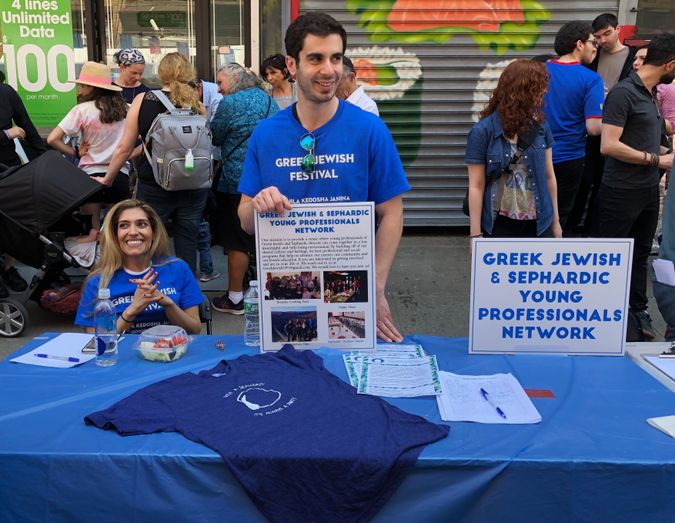 The Jewish communities of America in general and New York City in particular tend to fall back on an Eastern European-centric idea of what Jewish culture means — an idea now popularly known as Ashkenormitivity. The festival was a proud statement against that cultural hegemony, nearly to the point of Ashkenindifference.

At one point in my conversation with Gatenio, a middle-aged man stopped by our table.

“What’s your name?” the man asked me.

Man: “So you’re not Sephardic.”

A younger man, about early thirties, overheard the conversation and chimed in.

“He has Ashkenaz hair,” he said, gesturing to my head dismissively.

The first man walked away without a word. 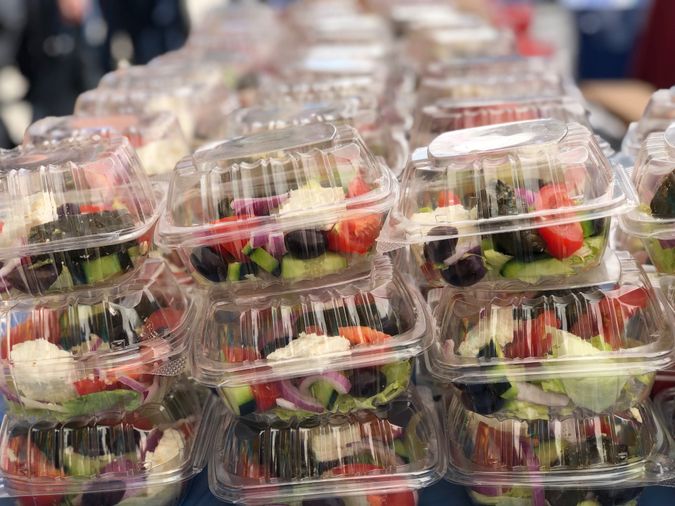 Over 700 Greek salads were sold at the festival. Image by Ari Feldman

For Avi Colonomos, 24, seeing this festive rebuttal to Ashkenormitivity felt “refreshing, but bizarre,” since, like many American Greek Jews, he has never lived out his Greek Jewish identity outside of family traditions: speaking Ladino with his grandfather, eating bourekas constantly, drinking Greek coffee (it’s like Turkish coffee) and taking trips to Greece.

“It’s a lot of at-home customs, culture, music, food, in the public sphere,” he said of the festival.

Colonomos, whose family identifies as Romaniote, noted the strange position Greek Jews often find themselves in: some non-Jewish Greeks don’t know — or won’t admit — that there are Greek Jews, while many non-Greek Jews just don’t know. And because of that minority position, both in Greece and America, opportunities to celebrate Greek Jewish culture in public have been few, perhaps nonexistent.

Colonomos, who was raised in Atlanta, said he only heard about the festival today, and was urged to go by his girlfriend. (She’s of Hungarian descent.) He predicted that when he told his Greek grandfather about the festival later, he wouldn’t know what to make of it.

“He’s not gonna have any sense of what a Romaniote festival could look like in New York City,” he said.

Angel, the Jewish Currents editor, noted that because of how decimated the Greek Jewish community was during the Holocaust, there is little communal memory to say what a Greek Jewish festival looked like.

“It’s very hard to know if we can actually get it back, or what it even looked like,” she said. 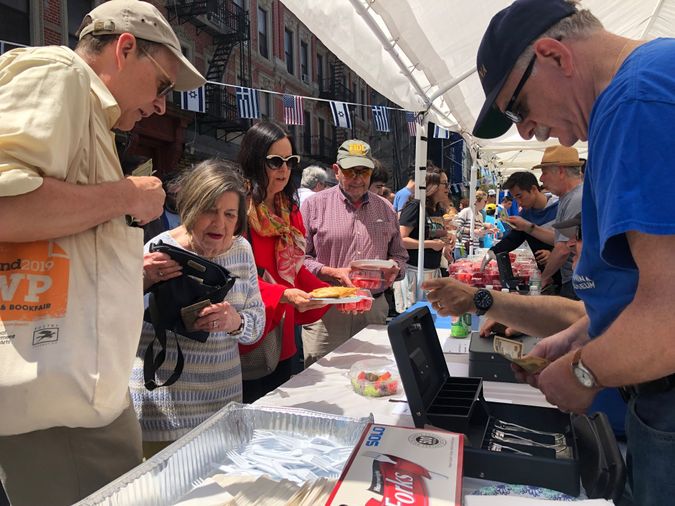 Andrew Marcus admits that the festival is an “innovation” in the long history of Greek Judaism, similar to KKJ’s decision 20 years ago to turn its women’s balcony into a museum, to use what remains of the Greek Jewish community to strengthen it and educate others about its history.

Creating something so new to strengthen the legacy of one of the oldest continuous Jewish communities in the world requires some interesting cultural stretches. Many of the performers Sunday were Greek – not Greek-Jewish — musicians, and Marcus said that they have taken inspiration from the festival put on by a nearby Greek Orthodox church. For Marcus, that’s taking a page out of his ancestors book.

“Our community would take the best of what the general culture had to offer and make it Jewish,” Marcus said. “This is us staking our claim to our heritage on our own terms.”

Angel, who helped man a booth at the festival a few years ago, said that she believes the festival is necessary — a stepping stone to a stronger community, with better education and more visibility in the Jewish world.

“What this festival is now, is putting down a flag, and saying we’re here, and allowing us to find each other,” she said. 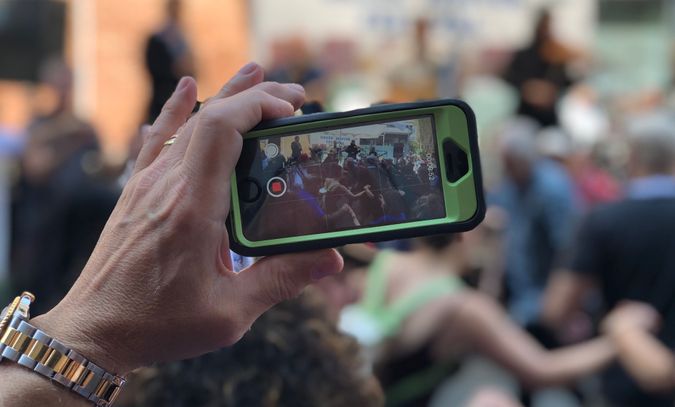 People dancing to Greek music at the festival, as seen through the iPhone of a festival-goer. Image by Ari Feldman

Clarification, 5/23/19 — This article has been clarified to note that Arielle Angel helped man a booth at the festival, but did not organize it, and that KKJ is not a Sephardic synagogue, but a Romaniote synagogue that has some Sephardic congregants.

What to read next: