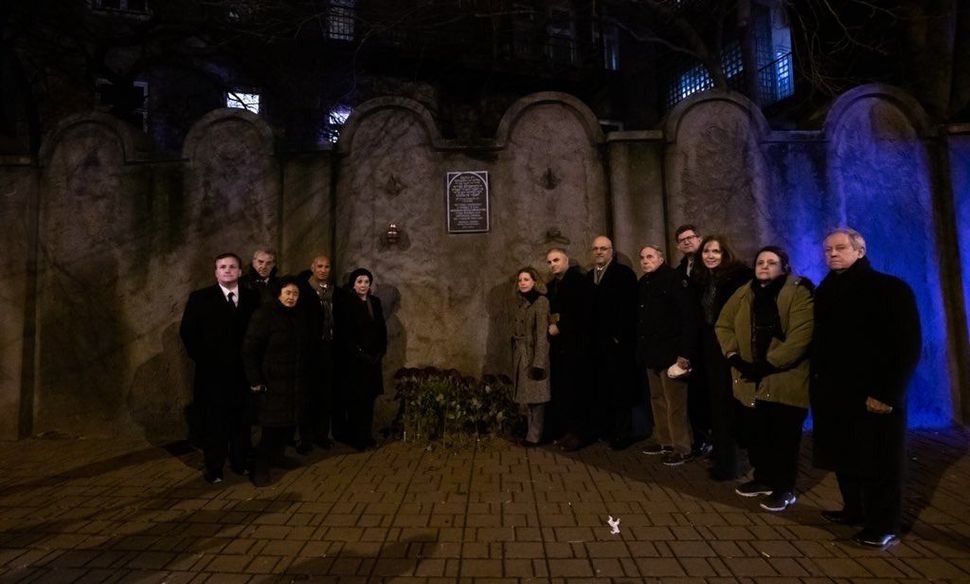 The bipartisan delegation led by Pelosi visited JCC Krakow on Tuesday after visiting the site of the former Auschwitz Nazi camp and touring the Auschwitz Memorial and Museum in advance of the 75th anniversary of the liberation of the camp.

The delegation, after being welcomed by JCC Executive Director Jonathan Ornstein, began its visit in Frajda, JCC Krakow’s preschool where they met the JCC’s youngest members. The delegation had a private meeting with Ornstein, 84-year old Holocaust survivor Zofia Radzikowska and Rabbi Avi Baumol, who was representing Polish Chief Rabbi Michael Schudrich.

Tonight, our bipartisan delegation concluded our visit to Poland by laying roses at the last remaining portion of the Ghetto Wall in Krakow’s Jewish quarter to honor the victims and survivors of the Holocaust. pic.twitter.com/IW0tmmnG8d

Ornstein told the Congress members about the JCC’s leading role in rebuilding Jewish life in Krakow, and Radzikowska spoke of her journey from surviving the Holocaust as a child to being JCC Krakow’s most active member.

Before visiting the JCC, Pelosi visited the Auschwitz Museum and saw the exhibition “Shoah” prepared by the Yad Vashem Institute.

“In memory of every single person killed in Auschwitz. Let them rest in peace. We all should commit ourselves to fulfill the promise of ‘Never again’,” Pelosi wrote in the museum’s memorial book.

Following their meeting at JCC Krakow, the delegation visited the former Jewish ghetto wall, where they left roses in tribute to Holocaust victims. The group is now headed to Israel before traveling back to the United States.

Along with Pelosi and Schneider, the rest of the delegation was Reps Nita Lowey and Eliot Engel, D-N.Y; Joe Wilson, R-S.C.; and Debbie Wasserman Schultz and Ted Deutch, D-Fla.