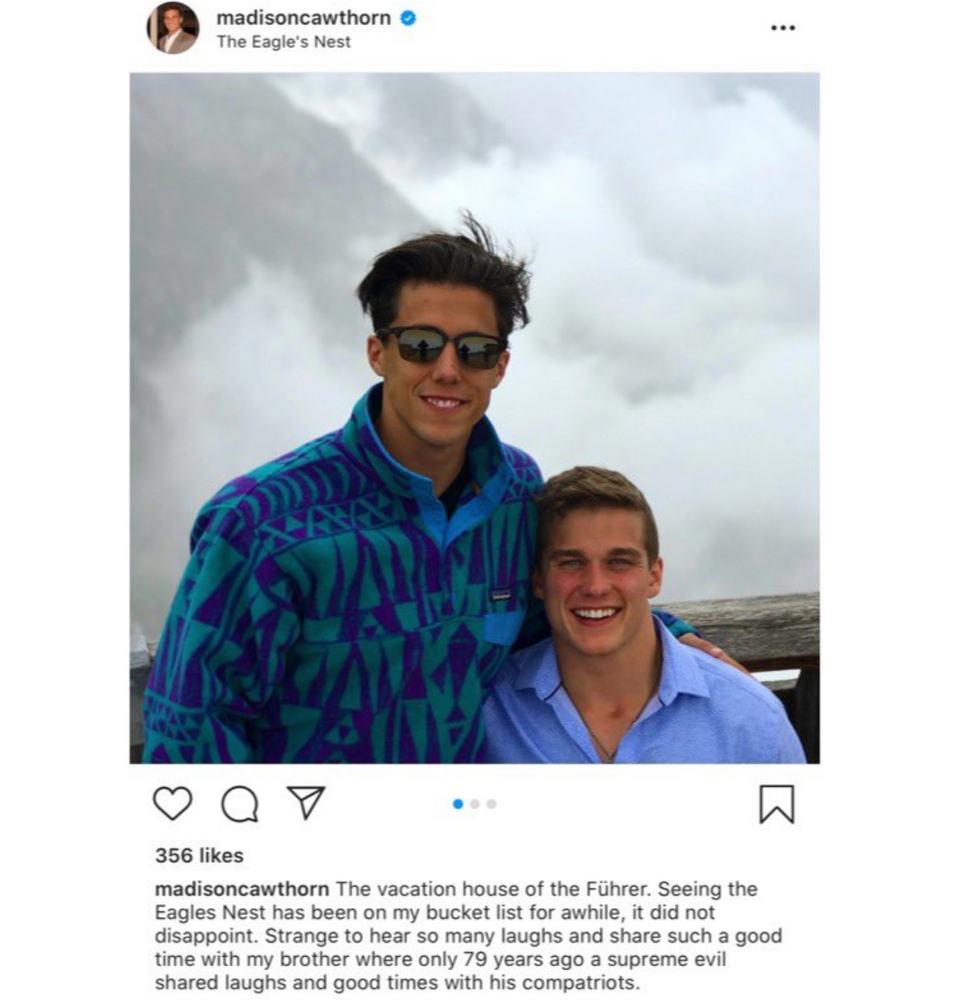 A right-wing Republican congressional candidate in North Carolina has taken down pictures he posted to Instagram from a 2017 vacation to the Eagle’s Nest, the Nazi retreat in Germany that Hitler visited more than a dozen times. Image by twitter

(JTA) — A right-wing Republican congressional candidate in North Carolina has taken down pictures he posted to Instagram from a 2017 vacation to the Eagle’s Nest, the Nazi retreat in Germany that Hitler visited more than a dozen times.

Just seeing these @CawthornforNC Instagram posts from 2017…my god.

Referring to Hitler with the honorific “Führer.” Saying a visit to Hitler’s vacation home where he planned out unspeakable atrocities as a “bucket list” moment…as if it’s a visit to the Grand Canyon pic.twitter.com/AvgNSe23cO

Madison Cawthorn’s pictures were removed Monday, the same day that a report in Jezebel made the case that he is “following the playbook of other, more successful far-right Republicans in recent years, attempting to rebrand his extreme views … as squarely in the mainstream of the Republican Party.”

In addition to calling Hitler “Führer,” a term of reverence, Cawthorn also named his real estate company SPQR, a term popular among white nationalists, and displays in his home an early American flag that the Anti-Defamation League says has been appropriated by far-right extremists, according to the Jezebel report.

Cawthorn defeated a Republican who had been endorsed by President Donald Trump in June’s primary. Since the primary, however, the 25-year-old candidate has worked to convey his support for Trump, according to a report by AVL Watchdog, a nonprofit news organization covering the portion of North Carolina that Cawthorn is seeking to represent in the House of Representatives.

The AVL Watchdog report published over the weekend includes many of the same details as the Jezebel report, as it spells out the far-right vision that Cawthorn, who would be one of the youngest-ever congressmen if elected, is offering local voters. But it did not include the Eagle’s Nest vacation photos, in which Cawthorn said a trip to Hitler’s retreat had been on his “bucket list.”

After the Jezebel report was published, the pictures began circulating on social media before they were deleted. Among those who shared the photos on Twitter was Moe Davis, the Democrat opposing Cawthorn in North Carolina’s 11th District, a traditional Republican district in the western part of the state.

The two men are competing to fill the spot in Congress vacated by Mark Meadows after he became the Trump White House chief of staff earlier this year. Davis is a retired Air Force colonel who resigned as Guantanamo Bay’s chief prosecutor to protest a policy allowing evidence obtained through torture to be used in trials. While he is considered a long shot to win in November, population shifts mean the district may not be as safely Republican as it once was.

“Hitler’s vacation retreat is not on my bucket list,” Davis tweeted Monday.