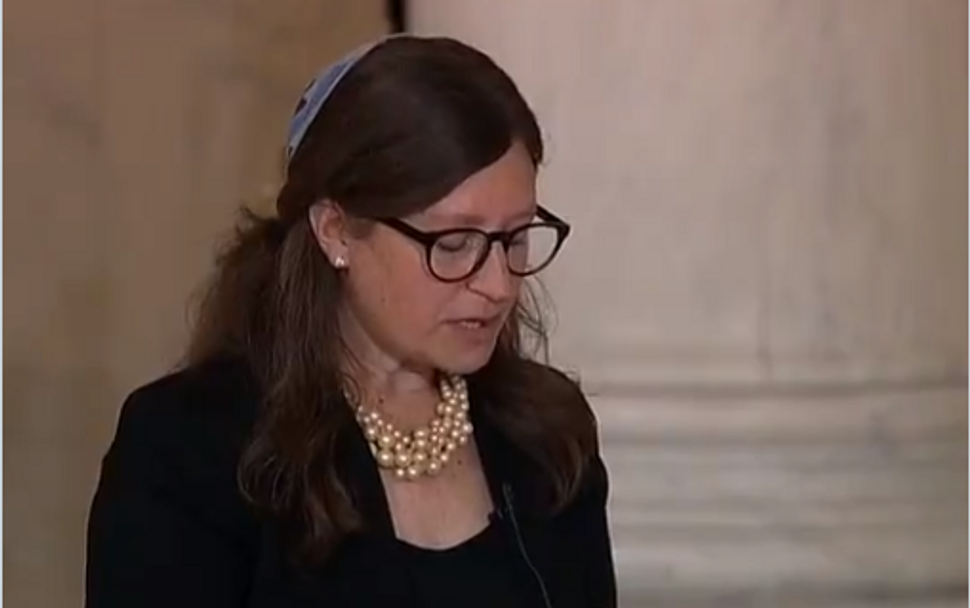 “This was Justice Ginsburg’s life’s work, to insist that the Constitution deliver on its promise that ‘We the People’ would include all the people,” she said. “She carried out that work in every chapter of her life.”

She also sang Psalm 23 in Hebrew and ended with El Malei Rachamim, a prayer traditionally said for the deceased.

Holtzblatt is a rabbi at Adas Israel Congregation in Washington, D.C., who revamped the synagogue’s bereavement programs and co-created the adult learning curriculum, among other projects, according to the synagogue’s website. In 2015, she co-wrote a feminist essay about the Passover story with Ginsburg.

She is a Schusterman Fellow, a board member at Avodah, a committee member for the United Synagogue of Conservative Judaism and the director of the Jewish Mindfulness Center of Washington.

Holtzblatt was formerly the Hillel Foundation Director of Campus Initiatives and Associate rabbi at Yale University Hillel and a rabbinic fellow at B’nai Jeshurun.

She was ordained at the Jewish Theological Seminary and is married to Ari Holtzblatt, who clerked for Justice Ginsburg in 2014.

Holtzblatt shared the news of Ginsburg’s death with her congregation during a Rosh Hashanah service and recalled a visit to the justice’s chambers, during which Ginsburg explained the significance of different objects to Holtzblatt’s daughter.

Correction, September 25, 2:13 p.m.: A previous version of this story misidentified the co-authored Passover essay as a Haggadah.