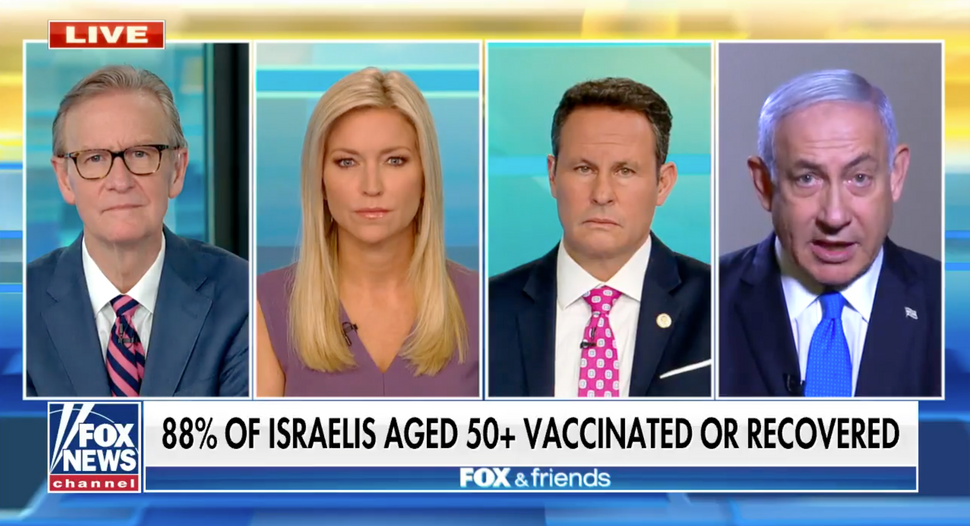 Israeli Prime Minister Benjamin Netanyahu appeared on “Fox & Friends” on Thursday morning — occupying the slot once reserved for former President Donald Trump — and showed some unease when talking about the current occupant of the White House, President Joe Biden.

“What’s your relationship like with President Biden? He’s been in office for 44 days,” one of the Fox & Friends hosts asked the prime minister.

“Well, I’ve known Joe Biden not for 44 days, I’ve known him for close to 40 years, when I came in as a number two in Israel’s embassy in 1982 and he was a young senator from Delaware,” Netanyahu responded. “So we’ve known each other and we’ve had a warm relationship over the years. I think Joe Biden is a friend of Israel, I know he is. I know he is committed to Israel.”

But Netanyahu, who is running for a sixth term in this month’s Israeli elections, was quick to note that “sometimes with the best of friends — in the family, as we say — we can have differences of opinion.”

“The most important thing that I think Joe Biden understands is that my commitment to prevent Iran from getting nuclear weapons is absolute,” the prime minister continued. “And I hope that we see eye-to-eye on everything. But one thing I believe he understands and respects, is that as the prime minister of the one and only Jewish state, we are not going to let a bunch of Ayatollahs wipe us out from the face of the earth or from the map of history. So I will do everything in my power to prevent Iran from getting nuclear weapons, and so far, we’ve been successful.”

Netanyahu’s repeated reference to ‘Joe Biden’ was striking when compared to how he referred to Trump in the same interview — and in previous interviews on the same network. “I brought four historic peace agreements that were helped by President Trump’s peace team,” Netanyahu said earlier in the interview, aired during the 8 o’clock hour on Fox News.

Referring to a person by the first name is common. Addressing Jewish audiences as vice president under President Barack Obama, Biden used to draw laughs from the crowd when he mentioned the line he once told Netanyahu — “Bibi, I don’t agree with a damn thing you say, but I love you.”

In recent weeks, Netanyahu repeated his opposition to the U.S. plan to return to the 2015 nuclear deal with Iran. On Wednesday, during a campaign rally in Jerusalem, Netanyahu told his supporters that his re-election is critical to protect Israel’s interests, as the Biden administration attempts to engage in direct talks with Iran. “The coming months will be crucial in the fight to prevent Iran from acquiring nuclear weapons. I will lead that fight,” he said. He also suggested that his controversial speech to a joint session of Congress in 2015 was what prompted the Arab world to pursue normalization with Israel. The delayed phone call by President Biden, which took place only after four weeks since entering office, was also highly notable to Likud supporters and raised fears of a frosty relationship to come.

But on one issue, the Israeli prime minister showed no daylight with the president — wearing masks. Asked what advice he’d give Americans, Netanyahu said, “The two most important things is get vaccinated as fast as you can and wear a mask. Do that. You know, it’s not a political question. This is what has to be done and that should be done by everyone.”

In the interview, Netanyahu also took pride in his country’s successful vaccination drive. “Israel used to be known — and is known — as a startup nation. From today, it’ll be also known as the vaccination nation, we’re setting the model for the world and we’re very proud of it,” he said.