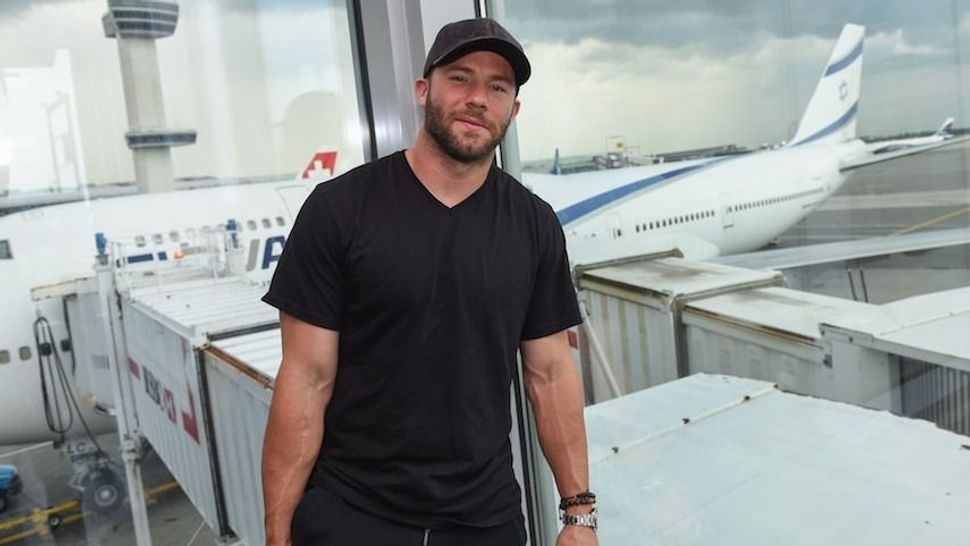 NFL star Julian Edelman on a trip to Israel.

Julian Edelman, one of the most prominent Jewish professional athletes in America, spoke out on Wednesday after it was revealed that a player for the Miami Heat had used an antisemitic slur. “Hate is like a virus,” Edelman wrote in an open letter posted to his Twitter account. “Even accidentally, it can rapidly spread.”

The incident in question occurred when Meyers Leonard, a power forward for the Miami Heat, blurted out the a string of expletives – including “you f—-ing kike bitch” – while he was playing the video game “Call of Duty,” which he was broadcasting for the general public on the platform Twitch.

“So we’ve never met, I hope we can one day soon,” Edelman, a wide receiver for the New England Patriots, wrote in an open letter to Leonard on Wednesday. “I’m sure you’ve been getting lots of criticism for what you said. Not trying to add to that, I just want to offer some perspective.”

Edelman continued: “I get the sense that you didn’t use that word out of hate, more out of ignorance. Most likely, you weren’t trying to hurt anyone or even profile Jews in your comment. That’s what makes it so destructive. When someone intends to be hateful, it’s usually met with great resistance. Casual ignorance is harder to combat and has greater reach, especially when you command great influence.”

William Daroff, the CEO of the Conference of Presidents of Major American Jewish Organizations, endorsed Edelman’s letter, writing on Twitter: “Thank you @Edelman11 for standing up, reaching out, and trying to make the world a better place, as you combat antisemitism in professional sports.”

This is second time in as many weeks that the term “kike” was used by someone on a livestream. In late February, a School Committee member from Lowell, Massachusetts referred to a former administrator at the Lowell Public Schools as a “kike” during the broadcast of a cable access show he hosts. He has since resigned his position.

“The Miami Heat vehemently condemns the use of any form of hate speech,” the team wrote in a statement.

“The words used by Meyers Leonard were wrong and we will not tolerate hateful language from anyone associated with our franchise. To hear it from a Miami Heat player is especially disappointing and hurtful to all those who work here, as well as the larger South Florida, Miami Heat and NBA communities. Meyers Leonard will be away from the team indefinitely. The Miami Heat will cooperate with the NBA while it conducts its investigation.”

Edelman, who has traveled to Israel many times, ended his letter to Leonard with an invitation. “I’m down in Miami fairly often,” Edelman wrote. “Let’s do a Shabbat dinner some some friends. I’ll show you a fun time.”