Meyers Leonard, the Miami Heat player who made headlines Tuesday for shouting an antisemitic slur while livestreaming a video-game, has been suspended from team activities a week by the NBA and fined $50,000.

The punishment is comparable with racial and homophobic slurs said by other NBA players in recent years. Leonard presumably did not receive a suspension of a certain number of games because he is already sidelined for the rest of the season as he recovers from shoulder surgery. 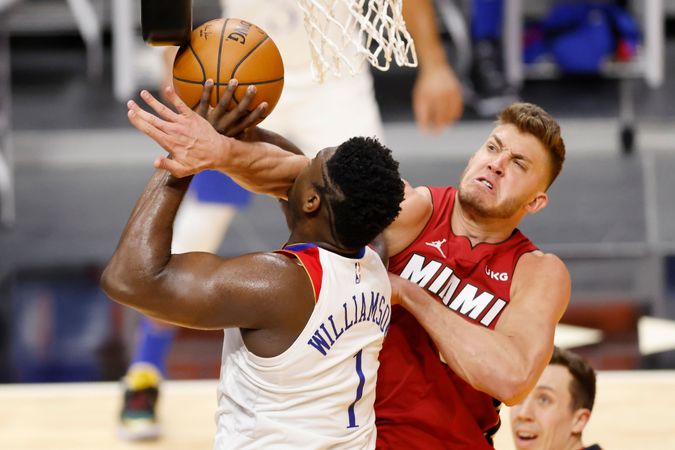 Leonard will also be required to participate in a cultural diversity program.

“Meyers Leonard’s comment was inexcusable and hurtful and such an offensive term has no place in the NBA or in our society,” NBA Commissioner Adam Silver said in a statement Thursday morning.

Leonard will also be required to participate in a “cultural diversity program.”

Here is the full news release, which includes a statement from Commissioner Adam Silver: https://t.co/I0QWNozHQ7 pic.twitter.com/YgugEyyVX8

There was some speculation that the ninth-year pro, who was in the last year of his contract, would be released by the franchise, which is owned by Israeli-American billionaire Mickey Arison. That Leonard escaped that may be less a statement of his value to the team on the court than the value of his $9.4 million contract, which can be used to match the contracts of other players at the March 25 trade deadline.

In the statement, Silver said Leonard had spoken to representatives at the ADL to better understand the impact of his words. The ADL had tweeted a statement Tuesday urging Leonard to apologize.

“We accept that he is genuinely remorseful,” Silver said.

Leonard was playing the war-style video game “Call of Duty” with the FaZe Clan, an esports organization, when he said the slur. He was livestreaming the action for an audience on the platform Twitch.

As the recording of Leonard’s remarks racked up hundreds of thousands of views online, FaZe Clan dropped its association with Leonard, who sponsors the team, and two corporate sponsors who were advertising on the stream cut ties as well.

On Wednesday, before the suspension was announced, Leonard’s teammates and coach condemned the act without qualification.

“A lot of emotions. Very disappointed,” head coach Erik Spoelstra said. “Those words are extremely hurtful. We don’t condone that. There’s just so much more that needs to be done.”

Spoelstra added that the team had had conversations about the incident. He said that while Leonard feels “super bad” about the slur, the context didn’t matter. “It’s just not right,” Spoelstra said.

Udonis Haslem, a veteran Heat reserve and one of the most respected players in the league, said the comments hurt him directly, and apologized on Leonard’s behalf.

“That won’t be tolerated,” Haslem said. “I felt that. I have a lot of Jewish friends. They call me Udonis Haslem-berg at times.”

Leonard apologized in a statement posted on Twitter Tuesday evening.

“While I didn’t know what the word meant at the time, my ignorance about its history and how offensive it is to the Jewish community is absolutely not an excuse and I was just wrong,” he said.

Leonard’s punishment did have precedent.

As the South Florida Sentinel’s Ira Winderman reported Wednesday, a one-game suspension is the standard for slurs and offensive remarks.

By terms of the NBA Constitution and By-Laws, the maximum current fine that can be leveled for such a statement is $50,000, according to Winderman.

When Rajon Rondo directed a homophobic slur at a referee in 2015 — who came out as gay days later — Rondo was suspended one game. In 2011, when Kobe Bryant yelled an anti-gay slur at a different referee, he was fined $100,000.

The league has one Jewish player, Wizards forward Deni Avdija. Avdija has not been made available by team public relations staff since the incident.

On Tuesday, Wizards head coach Scott Brooks said he did not plan to reach out to Avdija to discuss it, but “Deni knows that that’s not acceptable and our players know the same.” Avdija’s teammate Robin Lopez, who played alongside Leonard in Portland from 2013 to 2015, echoed Brooks’ remarks.

ESPN salary cap expert Bobby Marks noted that Leonard’s suspension does not come with a loss of pay for games missed, because he is injured. If he had been healthy, he would face forfeiting $324,000, Marks said.

The league’s rules require that salaries roughly match in trades between teams above the league’s salary cap. Most teams, including the Heat, are above that cap. This makes Leonard an attractive throw-in who can be used to balance trades for the Heat or for other teams.

If Leonard is released by another team, the remainder of his 2020-21 salary is guaranteed.