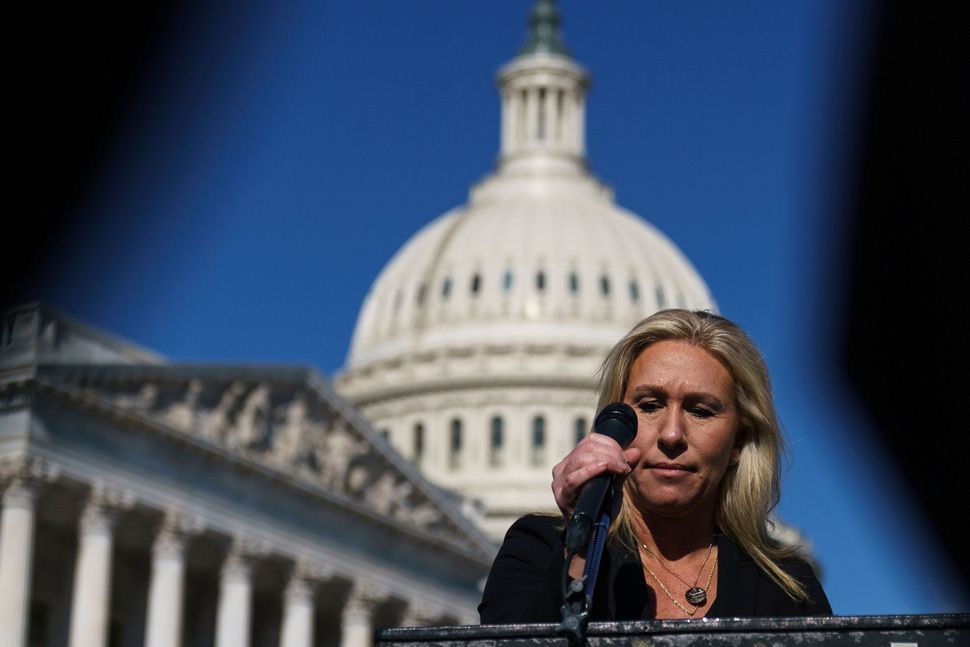 Rep. Marjorie Taylor Greene, who was stripped of her House committee assignments for antisemitic and other incendiary comments, said in an interview with an Orthodox weekly magazine published on Wednesday that “it really hurts” to be called an antisemite and racist.

Greene visited Orthodox areas of Brooklyn and Long Island on Monday in a tour organized by Chovevei Zion, an Orthodox conservative group based in Brooklyn.

In an an interview with Ami Magazine following the visit, the Georgia Republican said she felt lucky to be invited by the group’s leaders, Nachman Mostofsky and Yechezkel Moskowitz, “because it really hurts to be called ‘antisemite’ or racist.’ No one has ever called me that before in my life until the left-wing media decided to attack me.”

Greene’s embrace of QAnon conspiracy theories and controversial comments – including suggesting that a Jewish-funded space laser had sparked wildfires in California in 2018 – triggered backlash from the Jewish community and led the Democrat-controlled House, with the support of 11 Republican members, to take the rare step of removing her from Congressional committees last month.

In the print-only interview, Greene maintained that she never used the term “Jewish space lasers” in the recently uncovered Facebook post that was published by Media Matters. But she admitted that she did mention the Rothschild family “were either investors or owners of the company,” which is a longstanding antisemitic conspiracy theory. “I didn’t even know and didn’t find out until recently that the Rothschilds were Jewish,” she said.

Greene, who visited a Brooklyn yeshiva, matzah bakery, kosher supermarket and restaurant, and some Orthodox areas of the Five Towns in Nassau County, N.Y., said “not one person asked me” about the comments. The Forward’s repeated requests for an interview with Rep. Greene have been denied.

“I can tell you I have no idea what ‘Jewish space laser’ means because I never said it,” she told the magazine. “The community I have got to spend time with today is very similar to the people I have in my life.”

Greene revealed that she will be visiting former President Donald Trump at Mar-a-Lago in West Palm Beach at the end of the month.

“I am very much a regular person and I just want to do a good job,” Greene said at the end of the interview.