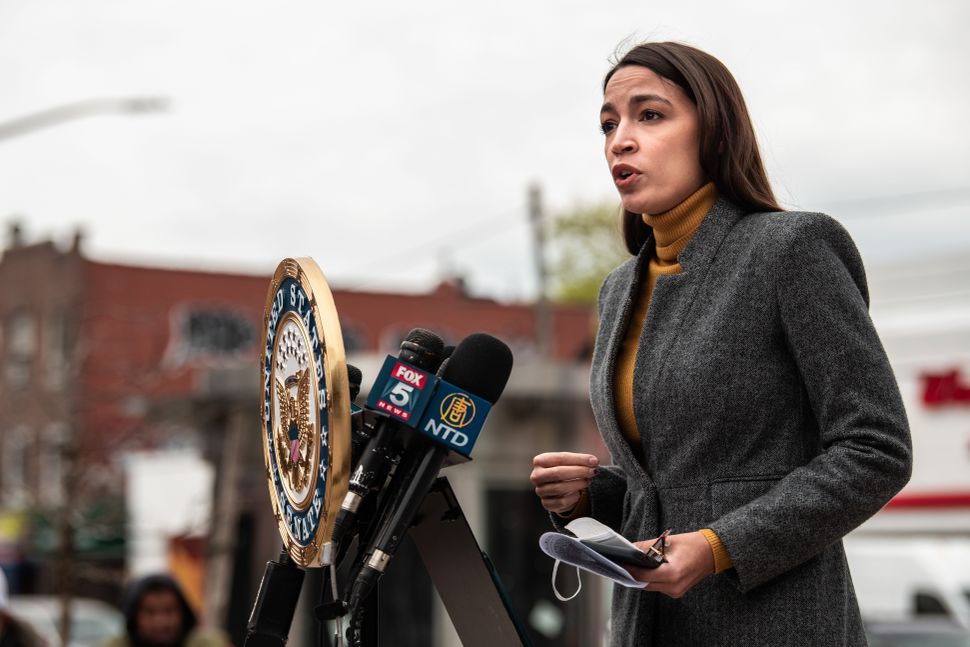 Rep. Alexandria Ocasio-Cortez, a progressive firebrand from New York, shared her views on solving the Israeli-Palestinian conflict, comparing it to the fight against the federal government’s abusive treatment of detained children at the southern border.

Vaguely implying that the expansion of Israeli settlements in the West Bank is not the path towards achieving the goal of peace, Ocasio-Cortez said, “Just like here in the United States, I don’t believe that children should be detained. I think that starting on those basic principles of human rights, we can build a path to peace together.”

The interview marks the first time the New York congresswoman, who pulled off a surprise upset in 2018, addressed the issue to a mainstream pro-Israel group. Last year, Ocasio-Cortez faced backlash for withdrawing from an Americans for Peace Now event commemorating Yitzhak Rabin, the late Israeli prime minister who was assassinated in 1995 for his attempts to broker peace with the Palestinians.

“I think that when we talk about establishing peace, and centering people’s humanities, protecting people’s rights, it’s not just about the ‘what’ and the end goal, which often gets a lot of focus. But I actually think it’s much more about the ‘how’ and the way that we are coming together and we interpret that ‘what’ and the actions that we take to get to that ‘what,’” Ocasio-Cortez said. “What this really is about is that it’s a question more than anything else about process. We really need to make sure that we are valuing a process where all parties are respected, and have a lot of equal opportunity to really make sure that we are negotiating in good faith.”

The JCRC represents the Jewish community to New York government officials and counts more than 50 local Jewish groups as members. It organizes the annual “Celebrate Israel” parade in Manhattan and sponsors trips to Israel for elected officials and business leaders.

In the video interview, Ocasio-Cortez also defended her level of engagement with the broader Jewish community in New York amid criticism from local leaders. The congresswoman mentioned local organizations like the Bronx House; the Jewish Center of Jackson Heights; the Jewish Community Council of Pelham Parkway; and J Street, a national pro-peace advocacy group, whom she had been in communication with in recent years. She suggested that she first made it a priority to meet with Jewish groups in her district and had to let go of reaching out to citywide organizations “for a little bit of another day. I think that’s maybe where some of that feeling and sentiment have come from. But I’m very happy to be engaging now.”

Ocasio-Cortez, who has been mentioned as a possible primary challenger to Sen. Chuck Schumer in 2022, said that she’s happy to be engaging with more citywide and mainstream Jewish groups “now that we have some time in this recovery out of COVID.” She added: “I’m very proud of our Jewish communities here in the district and the way that they’ve shown up, both for each other and also for the community at large.”

Ocasio-Cortez also discussed in length the fight against hate speech and white supremacy and the need for Holocaust education.

Rabbi Miller, who is retiring later this year, told Ocasio-Cortez, “Hopefully this is just an opening towards having those more lengthy and more intense conversations.”